Like many other Western countries, the US has a substantial gender wage gap, much of which can potentially be attributed to a lack of affordable childcare options which tend to restrict mothers’ work opportunities far more than fathers’. Bethany A. Carter argues that policymakers should look to the former East Germany for potential solutions to this gap. There, she writes, the much smaller gender pay gap can be attributed to the area’s extensive, professional daycare system which has persisted because citizens value it.

During the fourth Democratic debate on October 16th, then presidential candidate and former Texas Congressman Beto O’Rourke confronted Massachusetts Senator Elizabeth Warren on one of her key policy proposals: universal childcare. O’Rourke demanded to know whether American families would see a tax increase. Most of the discussion around this issue has centered on the cost of such a plan. And research has mainly focused on the short- and long-term benefits of childcare spending on children (i.e. a “child safety net”). But parents may benefit as much or more as their children.

As Warren notes, “The lack of access to high quality, affordable childcare prevents parents from fully participating in the workforce, holding them back from career and education opportunities and placing a drag on our entire economy.”

Typically, mothers fulfill the “stay-at-home” role. Often, access to affordable childcare influences whether women return to work after childbirth. My own research focuses on how access to childcare impacts the gender pay gap by determining the economic opportunities available to women.

Currently, families whose income falls below the federal poverty guidelines can send children up to 5 years old to Head Start. The locally-administered, national program develops literacy and language skills while preparing kids for school in a classroom setting. Elizabeth Warren’s Universal Childcare and Early Learning Act, if implemented, would create a universal daycare system that builds off the Head Start/Early Head Start program.

Most notably, the US spends far less on childcare than over developed nations. We rank at the bottom of OECD countries for spending on family benefits as a share of GDP. Only two other OECD countries spend less than the US (Mexico and Turkey).

Furthermore, there are substantial earnings differences between men and women. The overall gender pay gap between American men and women was 18 percent in 2017. Since 2004, the female-to-male earnings ratio has hovered around 80-83 percent. And there is greater disparity along the lines of race. For example, black women earned 68 percent of what white men earned in 2017 – and Hispanic women earned only 62 percent.

The US pay gap is comparable to other Western nations. In 2018, Canadian women earned 87 cents per every dollar earned by men. In the UK, women make 20.8 percent less than men do, which is slightly larger than the US pay gap. In Germany, the overall gender pay gap between men and women is 21 percent. However, there are regional differences. In the states of former West Germany, the overall gender pay gap is 22 percent. Meanwhile, in the states of former East Germany, the gap is 7 percent. Why is the earnings difference between men and women in West Germany three times larger than that of East Germany? All women are subject to the same maternity/parental leave policies implemented by the federal government.

In the German Democratic Republic (GDR), the communist government promoted gender equality in the workplace. Women did not have to choose between having children or having a career. They were encouraged to contribute to the common good by being both mothers and workers. And were guaranteed equal pay.

Before reunification, the GDR had the highest female employment rate in the world. In 1988, 88 percent of East German women were in full-time employment – while only 55 percent of West German women were employed full-time. Women in the GDR had access to an extensive, professional daycare system. Mothers also enjoyed reduced working hours. The combination of these two policies allowed women in the East to be something that women in the West could not: working mothers. 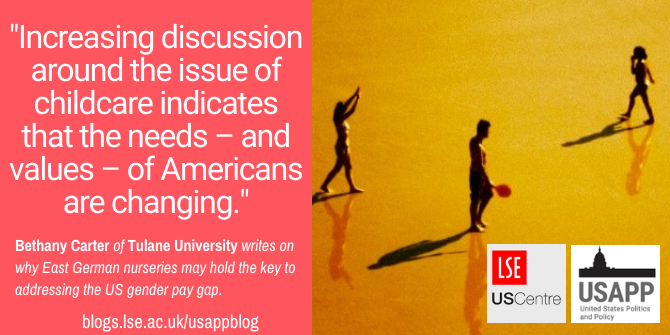 There is also a growing body of research that refers to the gender pay gap as a “motherhood penalty.” Studies have found that the earnings of men and women are similar until parenthood. After the birth of the first child, the earnings of women plunge – and men remain unaffected. Scholars have found that the long-run penalty in earnings for motherhood in Denmark was about 20 percent over 1980-2013.

In my own research, I have looked at how living in East or West Germany affects attitude towards policy. Using the European Social Survey (ESS), I analyzed the relationship between being a citizen of East or West Germany and having certain expectations of the government. I found that living in East Germany – instead of the West – is the strongest indicator that a person will agree that, “childcare services for working parents is the government’s responsibility.”

A 2014 study also found that East and West German young adults have different ideas about childcare. Those living in the East are more likely to favor early childcare than those living in the West. In addition, East Germans prefer that children begin daycare at an earlier age. The persistence of East Germany’s daycare system is partly because these citizens value it. These values are a legacy of the government that existed before reunification. However, the origins of the idea do not matter as much as whether the policy will benefit society.

East Germany shows that universal childcare has positive benefits for working mothers. The 7 percent pay gap between men and women is extremely small when compared to other developed societies like the US. But society must also value it. Early in the debate, when discussing the income gap, asserted Senator Warren: “Show me your budget, show me your tax plans, and we’ll know what your values are.” And she was not the only candidate to highlight childcare during the debate. Julian Castro proposed “investing in universal childcare, so that people can afford childcare instead of having to pay 20 percent of their income for it.” And in the previous debate, Biden and Sanders advocated for universal pre-school.

Increasing discussion around the issue of childcare indicates that the needs – and values – of Americans are changing.