President Trump ran for office with a vow to renegotiate or scrap 1994’s North American Free Trade Agreement (NAFTA), and at the end of 2016 the US, Canada and Mexico signed an agreement which would replace the older agreement. In new research Dimitrios Bakas, Karen Jackson and Georgios Magkonis find that a collapse of the old NAFTA deal would have hurt the US economy the most. This new ‘NAFTA 2.0’ should be welcomed in a time of growing uncertainty around trade.

Regionalism has entered a new phase, with mega-regional trade negotiations collapsing (for example, the Transatlantic Trade and Investment Partnership, TTIP) and unexpected withdrawals from long-standing integration schemes (for example, Brexit). Deep divisions and turmoil over trade issues have been epitomised in the uncertain future of the North American Free Trade Area (NAFTA), where President Trump called for a renegotiation of the deal. This environment has led to questions about the effects of a ‘break-up’ shock. Much less is known about the effect of negative integration shocks compared to trade integration.

A new agreement is on the table: The United States-Mexico-Canada Agreement (USMCA) or NAFTA 2.0. However, these are unpredictable times and there is still a great deal of nervousness regarding getting this deal into law. It has been signed by all three countries, but to date, only ratified by Mexico. The US has a Presidential election looming, which could derail the deal altogether.

Nevertheless, there is good reason to feel relief, since consensus was reached following what was a very chaotic set of negotiations. Furthermore, the changes in the new deal are not really all that dramatic and no country looks like they have made significantly more concessions than any other.

Beyond the detail of the text of the proposed deal, and individual interest groups, what does it mean for Canada, Mexico and the US? Perhaps the most important outcome is the sense of order and certainty. Until recently, trade economists did not really need to consider the impact of policy uncertainty as trade deals were long-drawn out affairs. However, large movements in world prices – or trade shocks – are starting to become a regular occurrence in the trade world, and with this, economists have started to consider their impact. Firstly, in simple terms, trade policy uncertainty could be interpreted as a trade barrier. Secondly, these shocks or surprises may have knock-on effects on macroeconomic fundamentals such as consumption, investment and gross domestic product.

Our work is the first study that explores trade shocks using a framework known as structural panel vector autoregression, which means that we can examine the effect of a shock on various macroeconomic indicators for the three members of NAFTA (Canada, Mexico and the US). This framework allows us to assess and test the potential linkages and spillovers among the NAFTA economies when faced with an unexpected (disintegration) shock.

“President Donald J. Trump at the G20 Summit” by The White House is Public Domain.

Our research has shown that the collapse of NAFTA could have exposed the US economy to the highest losses, while the Mexican economy the least. Canada has already started to diversify its export markets by signing new trade deals (for example, the Comprehensive Economic and Trade Agreement (CETA) with the European Union and the Trans-Pacific Partnership (TPP) with Pacific Rim countries), which are likely to further mitigate the negative effects of a potential collapse of NAFTA. In terms of Mexico, they would experience non-tariff barrier reductions (for example, by avoiding the NAFTA Rules of Origin) by trading under World Trade Organisation rules, which would go some way to overcome the associated tariff increases. On the other hand, US consumers would see higher prices due to increases in trade costs, where there is also the potential for additional US welfare loss due to any retaliation from Mexico and Canada. Overall, our findings suggest that a sudden (unexpected) negative shock on the integration of the NAFTA bloc damages the US.

Outside the NAFTA bloc, the USMCA deal is likely to be positively received. The text of the deal does not suggest that the US has received substantial concessions – in other words the deal offers advantages and disadvantages for all three countries. It also does not represent a big change from the current NAFTA deal. Therefore, for those countries, such as the UK, potentially looking to strike a trade deal with the US this suggests that they need to negotiate through this uncertainty.

Sudden unexpected negative shocks are an unwelcome addition to the trade environment.  The fact that the USMCA deal is on the table, even if waiting for the US and (and less worryingly) Canada’s ratification, is welcome. 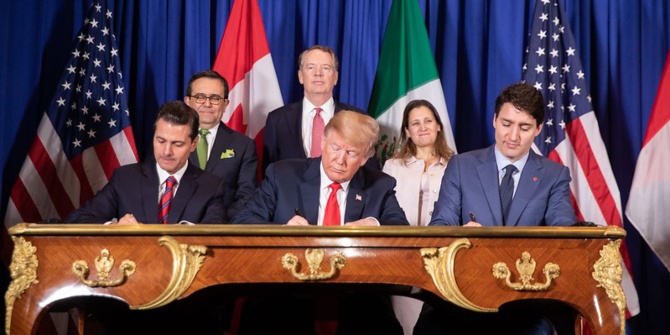