Yesterday, the US House Intelligence Committee began its first public hearings into impeaching President Donald Trump, with Ambassador Bill Taylor’s testimony suggesting that Trump was more involved with pressuring Ukraine to investigate former Vice President Joe Biden than he had previously claimed. US Centre Director, Professor Peter Trubowitz writes that as these hearings continue, Trump’s approval ratings will be an important guide to whether Republicans continue to back the President.

A key Republican talking point is that there is nothing in the record directly tying the President to pressuring the Ukrainians to provide dirt on Joe Biden and his son. Yesterday the first day of Congressional impeachment hearings brought things one step closer to the President. The current acting Ambassador to the Ukraine, Bill Taylor’s revelation about the phone call between Trump and EU Ambassador Gordon Sondland in July overheard by one of Taylor’s aides is front page news in the US and precisely, because it suggests Trump was directly involved at the ground level. This makes it harder to claim that others (e.g. Sondland, Trump’s personal lawyer Rudy Giuliani) were freelancing and that Trump was “out of the loop”. The President obviously recognizes the danger Taylor’s revelation poses — last night Trump denied talking to Sondland, though he parsed his words carefully.

Going into the hearings one question was how Democrats and Republicans on the House Intelligence Committee would approach them — what strategies they would adopt. It didn’t take long yesterday to find out. Democrats are clearly trying to keep the hearings focused narrowly on the Trump administration’s dealings with Ukraine in the hopes that testimony from credible witnesses like Ambassador Taylor and Deputy Assistant Secretary for Europe and Eurasian Affairs George Kent is enough to move public opinion. House Republicans did everything they could yesterday to shine the light elsewhere: to broaden the scope of the hearings by raising extraneous issues (e.g. the debunked theory that it was the Ukraine, not Russia, that interfered in the 2016 presidential election), challenge the House Intelligence Committee Chair, Democrat Adam Schiff’s, authority, and focus on the absence of first-hand knowledge of Trump’s decision to halt military aid to Kiev. Whether Republicans stick with that strategy may well turn on whether Taylor’s revelation is a one-off or the first in a series of new revelations about the president’s involvement. 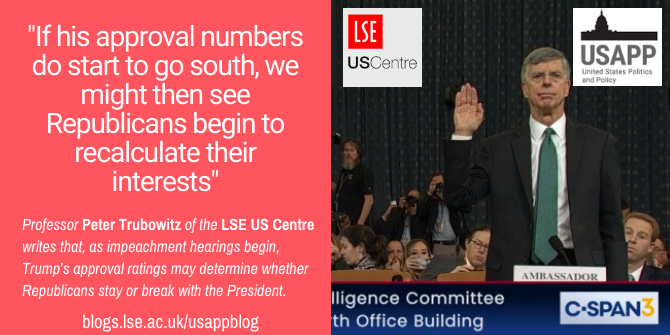 How all of this plays out will depend greatly on how hearings impact Trump’s approval ratings. His approval numbers are lousy, averaging 41 percent (RCP average). But it is important to note that Trump’s approval ratings haven’t dropped much since the Ukraine story broke and the House impeachment inquiry got underway. If his approval numbers do start to go south, we might then see Republicans begin to recalculate their interests. But that’s a big “if” in a country that is as highly polarized and partisan as the US is today.