In just over two months’ time, voters in Iowa will caucus to decide their preferred candidates for the 2020 presidential nomination. Andrew D. Green explains what makes the Hawkeye State’s political decision-making unique, writing that the individualism of many residents often leads to split ticket voting. While President Trump is almost certain to win the Republican contest in Iowa, he comments, Senator Elizabeth Warren and Mayor Pete Buttigieg lead the Democratic contenders.

For many Americans, Iowa is considered “flyover” territory as they travel from coast to coast. On the ground, however, the Hawkeye State is currently a political hotspot as Democratic presidential candidates and their surrogates crisscross the state to position themselves for the Iowa Caucuses in February 2020. Since 1972, Iowa’s presidential caucuses have held “first in the nation” status, meaning that the state’s voters will have the first opportunity to cast votes in the 2020 presidential nomination process. Though Iowa voters certainly are not “king makers” during the nomination process, Iowa voters who venture out to participate on February 3rd will play an important role in selecting the presidential nominees for the Democratic and Republican Parties.

Why is Iowa Unique?

Iowa is an interesting political case to study for political scientists and politicos due to the competitiveness of elections in the state. A major reason why Iowa elections are competitive is the individualism of Iowa voters. As Hugh Winebrenner and Dennis Goldford argue, Iowa’s political orientation toward individualism has led to politically independent voters. As a result, split ticket voting in the state is not abnormal. In 2016, a significant number of Iowa voters in House District 2 split their votes between Donald Trump and Dave Loebsack, the incumbent Democratic Congressman, as Trump won the popular vote in the district by 4 percent and Loebsack won his race by 7 percent. Split ticket voting was also present statewide in 2018 when Iowa voters elected Governor Kim Reynolds, a Republican, to her first full term. During the same election, Iowa’s Congressional delegation shifted from three Republicans and one Democrat to three Democrats and one Republican serving in the US House.

The competitiveness of elections has led political scientists and politicos to label Iowa a “swing state.” Donna Hoffman and Chris Larimer note that Iowa has been identified as a swing state in every presidential election since the year 2000, including during the 2016 presidential election. As I discuss in my recent book, there is a certain subset of Iowa voters who from election to election are willing to shift their votes between candidates of both parties. The 2016 election was no different when Donald Trump won the state by 9.4 percent. In doing so, he flipped 32 counties that President Barack Obama won in 2012 by an average difference of 27.6 percent.

On February 3rd next year, thousands of Iowa voters will pack into school gymnasiums, churches, community centers, and other local venues to participate in the Iowa Precinct Caucuses. While the outputs of the caucuses (e.g., select delegates to the County Conventions and party platform work) are the same for both the Democratic and Republican Parties, the means through which delegates are selected vary.

Projecting the winner of the Iowa Republican Caucuses is straight-forward: Short of withdrawing from the race, President Trump should win the Iowa Republican Caucuses with a healthy margin. The most recent Emerson College Poll of registered voters in Iowa who plan to attend the Republican caucuses revealed that 93 percent intend to support Trump. The reality is that Trump is still quite popular with Republicans in the state. In the same poll, 61.4 percent of Republicans approved of Trump’s performance as president while only 9 percent disapproved. The remaining 29.5 percent were either neutral or did not have an opinion regarding Trump’s performance. 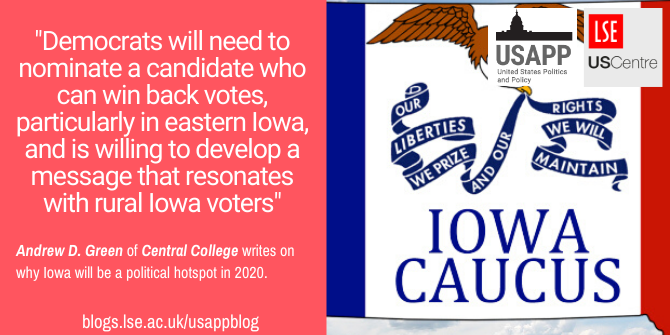 Recent polling of Iowa Democrats identifies a two-tiered race as the candidates enter the final three months of the Iowa caucus campaign. In the most recent poll from Quinnipiac University from early November, Senator Elizabeth Warren (20 percent), Mayor Pete Buttigieg (19 percent), Senator Bernie Sanders (17 percent), and Vice President Joe Biden (15 percent) round out the top-tier. The remaining candidates in the field make up the second-tier as no other candidate exceeded 5 percent support in the poll. The results of the Quinnipiac Poll are relatively consistent with the findings of the Siena College/New York Times Upshot Poll and the Iowa State University Poll, both taken in mid-October.

Additionally, it is clear from polling data that not all Iowa Democrats have made up their minds three months prior to the Iowa caucuses. According to the Quinnipiac University polling data, less than half (46 percent) of likely Democratic caucus-goers have made a final decision regarding their preferred candidate. What this reveals is that candidates in both the first and second tiers have opportunities for growth. Over the next three months, the candidates will continue to sell Iowa voters on their “viability” to win the nomination and their “electability” in a head-to-head matchup with Donald Trump in hopes of securing the votes of the remaining likely caucus-goers.

It is certainly true that Iowa Democrats have made gains since the 2016 election. Not only did they make gains on the Congressional level in 2018, the Democratic candidate for governor, Fred Hubbell, won five Trump counties on election night. In order to win Iowa, however, Democrats will need to nominate a candidate who can win back votes, particularly in eastern Iowa, and is willing to develop a message that resonates with rural Iowa voters.

It will be a tall task, nonetheless. As I wrote in my book on Trump’s 2016 electoral victory in Iowa, Trump was the frontrunner heading into the 2020 election cycle. That prediction is still valid nearly six months after finalizing the manuscript. In hypothetical head-to-head matchups with the four Democratic candidates in the first-tier from the most recent Siena College/New York Times Upshot Poll, Trump is favored by 6 percent over Warren, 4 percent over Buttigieg, 3 percent over Sanders, and 1 percent over Biden. While the differentials are small, they indicate that Trump will be a formidable incumbent regardless of the Democratic nominee.