Of the eleven contenders in the Democratic 2020 presidential primary, three are women. Amy Tatum looks at the uphill battle women face to be successful in politics: while men are often perceived to possess traits associated with leadership, women, by contrast tend to be linked to more communal behaviours such as kindness and understanding. She writes that women who seek political leadership must often walk a fine line between showing leadership and communal traits, a barrier that men do not have to overcome.

At the start of the Democratic primary competition six women declared their candidacy, marking the first time in history that more than one woman has been in the race. Now, as the first primary votes are cast in New Hampshire, three women remain: two Senators and one House Representative. For many, the topic of gender in the primaries may feel a little too like 2016 for comfort. However, with the recent disagreement between frontrunners Warren and Sanders over the latter’s alleged reticence over a woman’s ability to win the presidency, gender is back on the front pages.

Although the 2018 midterms saw the largest and most diverse number of women elected to Congress, it is important to remember that women still make up only 21 percent of the House and Senate and hold only nine state governorships. Of the 45 Presidents and 48 Vice-Presidents so far, not one has identified as a woman. Therefore, it isn’t difficult to argue that equal representation for women remains unachieved. My research shows that as the perceived level of prestige of an office grows, the numbers of women holding them decline. One argument to explain this is that women are still perceived as unsuited to such powerful, public roles. Role Congruity theory posits that there are two different types of traits; ‘agentic’ and ‘communal’. Agentic traits include those such as strength, aggression and authority. Communal include compassion, understanding and kindness. Men are perceived and assumed to possess agentic traits; women communal. When examining the expected traits of leadership, these largely fall into the agentic category and therefore men are assumed to be have leadership-related traits, thus it follows that women are assumed to be less likely to have them.

For the women in the 2020 primary race this barrier in perceptions asserts itself when the issue of “likeability” is raised. Likeability echoes back to the 2008 primary season in which a disdainful Barack Obama said of his opponent “you’re likeable enough Hillary” The concept of being likeable is not one that is raised with men seeking political leadership (it certainly wasn’t a hindrance to the current occupant of the White House) however for women this can be an insurmountable barrier. Minnesota Senator Amy Klobuchar, one of the three women still in the race, came under fire early in her campaign for allegedly shouting at staffers who gave her an unclean comb with which to eat her salad. California Senator Kamala Harris was labelled “nasty” by President Trump, Senator Warren has been subject to speculation on whether she could pass the “likeability test”. As women in positions of power, these women are running the risk of displaying agentic traits without the antidote of having the communal traits that may be needed to reassure some of the electorate of their femininity.

Research by the Centre for American Women and Politics at Rutgers University has also found that voters do not expect the same levels of honesty and ethical behaviour from male and female candidates: they expect less from men and thus women candidates can be prone to being held to a higher standard. It could be argued that this is down to the notion of role congruity: we expect women to hold the communal trait of honesty and therefore when they appear to not display such traits, it causes questions over their character and role as a woman. If this holds, then recent media coverage of the Warren/Sanders conversation poses a threat for Warren as questions of her honesty have the potential to cause more damage to her than they do her male colleague. 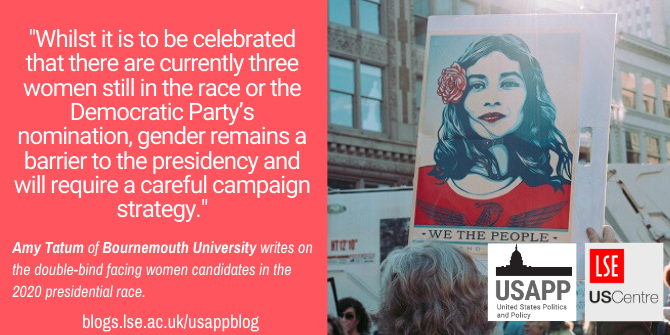 Not only do women seeking political leadership have to contend with this perceived incongruence but they are also tasked with overcoming the ‘double-bind’: the need to show they possess the agentic traits required for leadership but also the communal attributes expected of them as women. Such a balancing act of character traits creates an extra barrier for women seeking political leadership to have to overcome. Kate Manne, author of Down Girl and expert on misogyny argues that more recently women have been able to overcome this agentic barrier by showing themselves to be “highly-communal”, showing overt displays of compassion, kindness and empathy. This is echoed in the literature on women in leadership overcoming the double-bind; other studies have also found that overt displays of communal behaviour were vital in neutralising the negative responses to overly agentic behaviour in a woman. Within the coming primary races, the women that remain on the ballots will need to attest to their agentic abilities, their credibility in terms of foreign policy, the economy and national security.

It is worth keeping in mind that all three women still in the race have substantial experience. Warren is a former Professor in law and economics, has served 8 years in the Senate and sits on the Banking and Armed Services Committees. Klobuchar, a lawyer, has been a vocal member of the Senate Judiciary Committee and sits on the Joint Economic Committee. Representative Tulsi Gabbard, a member of the Hawaii Army National Guard sits on both the Committees of Foreign Affairs and the Financial Services.  All have relevant and real experience of the leadership-related issues that would be faced should they take over the Oval Office. However, they will also need to ensure that they display their communal traits to avoid the potentially campaign-ending labels of “unlikeable” or “unfeminine”. This is not something required of the male candidates running for the nomination.

Whilst it is to be celebrated that there are currently three women still in the race or the Democratic Party’s nomination, gender remains a barrier to the presidency and will require a careful campaign strategy. Although the candidates themselves may not wish to have gender as a campaign topic, change-resistant gender stereotypes and norms are not a thing of the past. It will be the decision of each woman whether they embrace their gender, choose to display their communal traits as a strategy to overcome the double bind and go up against a President well versed in misogynistic rhetoric. Alternatively, do they ignore their gender in the hopes of avoiding the potentially fatal activation of role incongruity? It has only been tried once previously, in 2016 by Hillary Clinton. Clinton’s attempt was unsuccessful and her election loss shock waves across the world.

The 2020 primary season began in the first week of February with the calamity that was the Iowa caucus; early results show that Warren came in third with neither Klobuchar nor Gabbard picking up any delegates. Much of the media coverage has focused on the male candidates and the competition between them, largely erasing the women candidates from the story. Whilst it is good to see a lull in the gender-focused media coverage, the erasure of the women candidates will not help advance women’s equality in the race for the presidency. As the frontrunners stand, the 2020 election could very likely to be another contest between two white men and thus the highest glass ceiling in political leadership will remain firmly intact. Through a greater understanding of the electorates’ perception of women in roles of political leadership, the hope would be to lessen the impact of role incongruity in political elections however this cannot be done if the status quo of men in the Oval Office continues.

With the primaries now beginning in earnest, it remains to be seen how the electorate will vote, but we can only hope that the women candidates gain the same coverage on policy and campaigning as their ever present, ever dominant male opponents and that their campaigns are not forced to focus strategy on battling the double-bind and not the other candidates.