Late yesterday, the Democratic presidential nominee, Joe Biden, announced that California Senator Kamala Harris would be his running mate in the November election. Amy Tatum writes that while Harris is a strong choice for the ticket, she is likely to face significant misogyny, and the framing of her as the ‘first’ woman of color to be chosen for the position, and ‘first’ woman to potentially hold the office, could mark her out as ‘other’ among some voters.

Last night, former Vice President and 2020 Democratic presidential nominee, Joe Biden announced Senator Kamala Harris of California as the person who would join him on the 2020 Democratic presidential ticket. That his choice is a woman is no surprise; Biden vowed in March that he would choose a woman as his running mate. The months since have been filled with speculation as to which woman he would pick. Harris is a strong choice. A former District Attorney, Attorney General and current member of the United States Senate, Harris is highly qualified for the position. During her campaigning in the Democratic presidential primaries she showed herself to be an excellent communicator, debater and campaigner. There is no doubt that she has earned this place on the ticket and would make an excellent Vice-President in a Biden Administration. Yet Harris’ place on the ticket also has the potential to activate the powerful boundaries that women seeking political office repeatedly face.

The choice of Harris as Vice-President marks the third woman to be chosen for this role by a major political party, only Geraldine Ferraro in 1984 for the Democrats, and Sarah Palin in 2008 for the Republicans, have come before her. Six women ran for the top spot on the Democratic 2020 presidential ticket and all were defeated by Biden; a white male.

The role of Vice-President is to support the President. As a stand-in and a second-in-command, deferring to the President and Commander in Chief, the role could be seen as a more communal role than the presidency and therefore more acceptable for a woman to hold. Many consider that women are more communal and empathetic (called role Congruity theory), and that they are not as authoritative or as strong as their male counterparts, therefore the role of Vice-President may be less likely to be perceived as breaking gender norms compared to the top position. Having the first woman in the Executive Offices of the United States in the role of Vice-President may be a more acceptable route for US voters for women to break this glass ceiling.

The importance of being framed as ‘First’

The framing of Harris as the ‘first’ has already been prolific in the less than 24 hours since Biden announced his choice. Harris has become the first woman of colour to be chosen as Vice-Presidential candidate; she is the first Asian American to be on a presidential ticket; and if elected would become the first woman to hold the office of Vice-President of the United States. These firsts are calls for celebration and mark significant milestones in the representation of women, and specifically women of colour, in executive office. 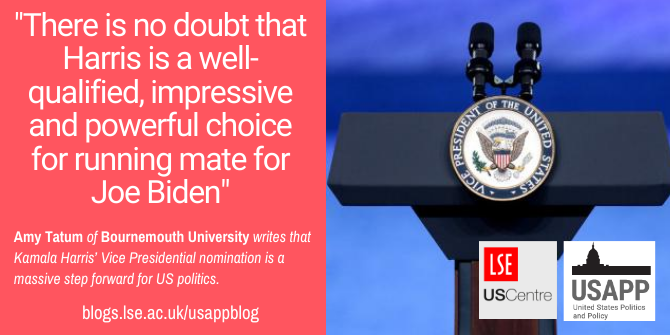 “Vice Presidential podium” by Gage Skidmore is licensed under CC BY SA 2.0

In a year that has seen Black Lives Matter protests sweep the globe having a woman of colour one step closer to the presidency could have a galvanising effect on voters and could see history being made for women of colour. However, the ‘first’ frame also has the potential to mark Harris as “other”, the very use of the word ‘first’ repeatedly activates the violation of gender stereotypes and highlights this potential violation of expected gender norms. The media’s fascination with the “first” frame could cause damage to the perceived electability of a Biden/Harris ticket.

Within hours of the announcement President Trump had labelled Harris “nasty”, commenting that she had been “nasty” to Biden during the debates and “nasty” to Justice Brett Kavanagh during his Senate Supreme Court confirmation hearings. Trump’s deployment of the “nasty” rhetoric echoes back to his 2016 campaign against Hillary Clinton. This is a well-worn misogynistic trope: women who speak out against men are “nasty” and unfeminine. The use of this gender stereotyping will undoubtedly be seen repeatedly during the 2020 campaign in order to highlight Harris’ perceived gender violations.

Cornell University philosopher, Kate Manne, has argued that women in positions of political leadership can become like lightening rods for misogynistic feelings in a society, they are punished for the perceived gender violations of all women and thus can be hit with the full force of the patriarchal power. Harris will likely face opposition rooted in misogynistic rhetoric, and will need to rely on her own supporters to overcome such tactics.

There is no doubt that Harris is a well-qualified, impressive and powerful choice for running mate for Joe Biden, she is more than capable of holding the office of Vice-President. The campaign to get there has the potential to be gruelling and brutal, however in the year that has seen more disruption to the status quo than any other in decades perhaps this will be a status quo ending election in which the first woman will assume office in the Executive Branch. Not quite the Oval yet, but a massive step for US politics.