While political pundits often focus on well-known swing states like Pennsylvania, Ohio, and Michigan, North Carolina is often considered to be a red – or Republican – state. Looking at presidential vote share and voter registration data, Christopher Cooper argues that the Tar Heel State is in fact a purple state, and one which could mean the difference between winning or losing a presidential election.

Since at least 2008, North Carolina has been one of the key states which determine who occupies 1600 Pennsylvania Avenue. In fact, as the above quote from a Republican Party mailer suggests, North Carolina may be the single most important state in this Presidential election.

One reason that North Carolina is viewed as critical to both parties is that divining the state’s political allegiances often depends on who is trying to do it. From one angle, it looks like a Democratic stronghold. After all, the Governor is a Democrat, the State Supreme Court is firmly in Democratic hands, and Democrats are the largest group of registered voters there. From another angle, however, it looks like a state that is dominated by the Grand Old Party (GOP). After all, North Carolina has supported Republican Presidential candidates in nine of the last ten Presidential elections, and the state legislative, congressional and senate delegations are all firmly under Republican control.

The truth, of course lies somewhere in the middle. Take one piece of evidence in favor of Republican control of the Tar Heel State—the fact that Republicans have won every Presidential election since 2008 and nine out of the last ten elections. While this may seem like unassailable evidence that Republicans dominate here, it ignores the reality that some elections are closer than others. In 1984, for example, Republican Ronald Reagan won every state except Minnesota and Washington D.C. To account for swings between elections, Figure 1 below plots the Democratic vote share in North Carolina as a rank where 50 would indicate the state with the most Republican vote share in the country and 1 would indicate the state with the most Democratic vote share. Compared to other states, since 1996, North Carolina has moved not towards Republican dominance at the Presidential level, but away from it. In 2016, the Tar Heel State was as centrist as a state can be. 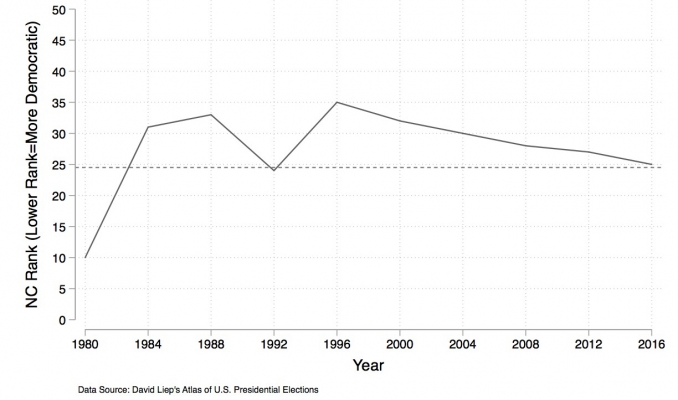 Similarly, while it is true that the plurality of North Carolinians are registered to vote as Democrats, this statistic is also a bit misleading. As Figure 2 below suggests, The Democratic edge in voter registration is rapidly disappearing, and not because of the rise of Republican voters, but rather due to the rise of Unaffiliated voters who eclipsed Republican registrants in 2017 and are expected to overtake Democratic registration by 2022. The rise in Unaffiliated voters, whose vote choice has favored both Democrats and Republicans, is yet more evidence in favor of a purple North Carolina. 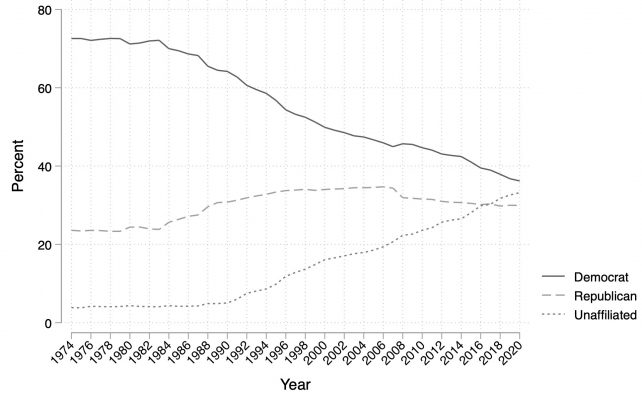 North Carolina isn’t just a purple state, however, but one that is large and purple. Florida, Pennsylvania, Ohio and Michigan are the only swing states with more electors up for grabs than North Carolina (which has 15 electoral votes). Barring an unprecedented shift in demographic patterns, after the 2020 Census North Carolina will overtake Michigan in size and in the number of electors, making it the third largest swing state in the country. Given its bipartisan lean and size, it is not an overstatement to conclude that North Carolina can provide the difference between winning and losing a presidential election. 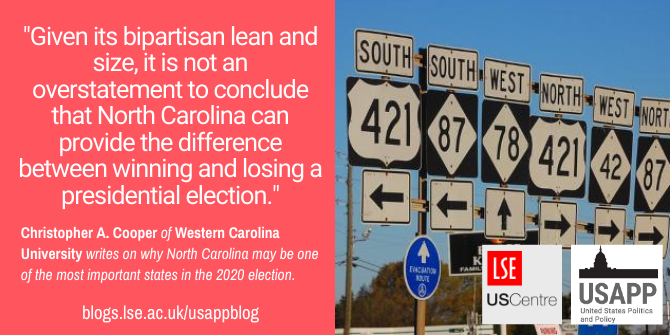 “Take your pick” by Donald Lee Pardue is licensed under CC BY 2.0

These facts are not lost on politicians and campaign strategists, who have long been aware of the importance of North Carolina’s unique place in the presidential process. The 2012 Democratic National Convention was held in North Carolina and the 2020 convention Republican convention was scheduled to be held there as well. The desire to place conventions in North Carolina is not an accident—parties choose convention sites strategically, following the idea that holding a convention in a swing state may cause that state to swing in their direction.

Examining President Trump’s tweets, which in many ways are the essence of current American politics, also reveals the importance with which even the current occupant of the White House holds North Carolina. Trump has Tweeted about North Carolina 140 times since 2016, surpassing how much he has tweeted about traditional battleground states such as Michigan, Arizona, Nevada, Colorado, and New Mexico. When controlling for the number of electoral college votes in the state, Trump’s attention to the Tar Heel State looks similarly fawning; President Trump tweeted 9.3 times per Electoral College vote—surpassing even Pennsylvania in this decidedly 21st century measure of political attention.

Recent public opinion polling and political predictions reinforces the view that North Carolina is neither red, nor blue, but instead purple. In early June polls came out from conservative-leaning Civitas Institute and liberal-leaning Public Policy Polling. Not surprisingly, the former had Trump narrowly leading Biden, while the latter showed Biden with a small lead. Pundits from Larry Sabato’s aptly named Crystal Ball to the Cook Political Report seem to agree that all of these factors together produce a North Carolina that can be described as nothing other than a “toss-up.”

In the end, the results of the Presidential election in North Carolina are, once again, too close to call. And, unless there is a radical change in the structure of America’s political parties, or the profile of North Carolina’s voters, that fact is likely to remain true for the foreseeable future.