Last month President Trump unveiled his administration’s vision for Israeli-Palestinian peace, drafted without Palestinian involvement. Andrea Dessì writes that Trump’s vision is an outgrowth of the historically close US-Israeli coordination on Middle East policy that has developed since the late-1950s, becoming formalised and institutionalised via a series of unprecedented agreements signed during the Ronald Reagan Administration of the 1980s. He argues that the US should return to a more balanced and preferential (but not exclusivist) relationship with Israel, one that appreciates that long-term US interests in the region cannot be served by an excessive assimilation between US and Israeli approaches to the Middle East.

Much ink has been spilt on the so-called Trump ‘vision’ for Israeli-Palestinian peace. Originally billed as the ‘deal of the century’, this plan deals not with peace nor with reconciliation. Rather it represents a declaration of victory by the Israeli occupation. Indeed, the essence of the 181-page document can be summarized in two simple components: security and strategic depth for Israel (state), ‘quality of life’ under occupation for the Palestinians (people).

The product of close coordination between the US Trump administration and the right-wing government of Benjamin Netanyahu, this ‘vision’ reflects the climax of an incremental process of assimilation between US and Israeli viewpoints on the Middle East. Decades in the making, but never a foregone conclusion, this assimilation has produced an accelerated process of ‘Israelization’ of US Middle East policy in which US perceptions, definitions and strategic reading of regional developments assume a distinct Israeli flavour. ‘Israelization’ is visible in US approaches towards Iran, Lebanon and the Palestinians, in the legal interpretations of UN resolutions and documents and in the adoption of similar military tactics for urban warfare, anti-terrorism and even local policing. The targeting killing of adversaries, such as the recent US assassination of Iranian general Qasem Soleimani in Iraq, or the adoption of similar terminologies, with US Defence Secretary Mark Esper recently quoted using the classic Israeli jargon of “mowing the lawn” to refer to periodical US drone strikes against extremist elements in Libya, are further examples of this assimilation.

‘Israelization’ is the outcome of an often-overlooked mutual struggle between Washington and Tel Aviv over the direction of US Middle East policy and the role and value of Israel in advancing US interests in the region. Israel’s gradual success in overturning previously held convictions about US Middle East policy and the US-Israel relationship without concessions on Israeli policies that Washington had long opposed, effectively ‘entrapped’ the US in an increasingly one-sided relationship with its small Middle Eastern ally. Presidential authority to revisit such a relationship is constrained by domestic politics and the successive approval of ad hoc commitments for preferential treatment towards Israel, while the diffusion of such cooperation into the bureaucracies of both countries has granted the Israeli establishment (and its pro-Israel allies in Congress) ample means to mould and influence US policy and perceptions of the Middle East.

Two concepts – ‘exclusivity’ and ‘linkage’ – can serve to contextualize the importance of this struggle against the backdrop of the incremental development of US-Israeli ties and the broader evolution of US foreign policy in the Middle East. An exclusivist US-Israeli relationship in the Middle East has long been a key objective of the Israeli political establishment, a means to ensure that Israeli interests be placed front and centre of US Middle East policy and avoid that Washington someday sacrifice – or at the very least ask Israel to compromise on – these interests to draw the Arab states closer to the US. To establish such exclusivity, successive Israeli governments have gone to great extents to promote a supposed interdependence and complementarity between US and Israeli interests (and values) in the Middle East, promoting Israeli capabilities to advance US interests while repeatedly seeking to undermine rising elements of US-Arab coordination out of a fear that this may lead to a dilution of the ‘special’ US-Israel relationship and a diminished US reliance on Israel.

Linkage, a second fundamental component of this US-Israel struggle for influence and leverage, refers to the traditional US understanding of the centrality of the Arab-Israeli conflict for the regional ecosystem in the Middle East and the significant constraints this conflict placed on advancing US interests in the Arab world. An appreciation of the links between US-Israel relations, the Arab-Israeli conflict and broader US interests in the Middle East were understood as threats to Israel’s exclusivist ambitions in relation to the US. Such perspectives meant that US-Israel ties could not be formalized into a formal alliance until the conflict with the Arab states and the Palestinians were resolved. Taken a step further, such understandings could provide arguments in support of conditionality on US aid for Israel, using US support as a lever to extract concessions, a theme that is today re-emerging in Democratic circles due to the views of presidential candidates such as Bernie Sanders and Elizabeth Warren. Such conditionality has long represented a nightmare scenario for the Israeli establishment given Israel’s complete reliance on US military and financial assistance in the post-1973 era.

“President Trump Unveils a Plan for a Comprehensive Peace Agreement Between Israel and the Palestinians” by the The White House is Public Domain.

Israel ultimately emerged victorious on both accounts, gradually chipping away at the US’s traditional reluctance to consider Israel a formal ‘ally’ of the United States while ‘de-linking’ any such recognition or provision of increased preferential treatment from progress on the Arab-Israeli or Israeli-Palestinian fronts. The result has been a significant decline in US leverage over Israel as timid forms of conditionality have been replaced with inducements and additional increases in aid, furthering this vicious cycle of ‘entrapment’ in a pro-Israeli ‘policy straitjacket’ that constrains US policymakers from promoting alternative approaches or understandings of US interests in the region. The US’s commitment to preserve and augment Israel’s Qualitative Military Edge (QME) against any possible combination of regional forces, which since 2008 has become a legal commitment for every sitting administration, is perhaps the clearest indication of Israel’s success in establishing an exclusivist relationship with the US in the Middle East.

My Ph.D. research at LSE delved deeper into these processes of ‘entrapment’ and ‘Israelization’, identifying the period after 1983 and the administration of Ronald Reagan as a critical juncture for this gradual overturning of US approaches towards Israel and the Middle East. It was during these years that Israel received its formal recognition as an ‘ally’ and ‘strategic asset’ by the United States, and in was during the 1980s that multiple bilateral working groups – the Joint Political Military Group (JPMG), the Joint Security Assistance Planning Group (JSAP), the Joint Economic Development Group (JEDG) and Joint Political Consultations (JPC) – were formally established. The Reagan administration can thus be credited with formalizing much of the institutional framework that has produced an ever more interdependent and exclusivist (rather than simply preferential) US-Israel relationship in the post-Cold War era. In the process, Reagan also transformed the Republican Party into an unabashedly pro-Israel party that it is today, placing it in outright competition with the Democrats. It is no coincidence that the Trump administration frequently cites Reagan as inspiration for its policies, including those towards Israel.

Today, ‘Israelization’ is most evident in the political, ideological and financial interdependence between the Republican GOP and the right-wing Likud party in Israel. Trump and Netanyahu share the same political donors (Sheldon Adelson), ideological gurus (Yoram Hazony), judicial problems and a deep seated antipathy for international law and multilateralism. Add to this the multiple family and shared business links and a pennant for interferences in the electoral processes of each country, and a more complete picture emerges.

It is thus increasingly hard to distinguish US policy from that of Israel. Partially explained by the established practice – of both Republican and Democratic administrations – for prior-consultation with Israel on any new policy approach towards the Middle East (what ex-Israeli ambassador to the US Michael Oren calls the ‘no-daylight principle’ and US-negotiator Aaron David Miller has in the past referred to as acting as ‘Israel’s lawyer’), such assimilation has today reached new heights under the Trump administration.

Overall, the extent of this Israelization is clearly visible in the Trump ‘vision’, which represents a re-hashing of old maximalist Israeli plans for annexation and limited autonomy for Palestinians, in the US-Israeli presentation of the plan ignoring Palestinian objections and in the impending launch of yet another joint US-Israeli committee, this time entrusted with mapping Israeli settlements to be annexed to Israel. The composition of the US negotiating team, made up of individuals with close ties to the Israeli settlement-industrial complex, is a further indication of this almost complete assimilation between the Trump GOP and Netanyahu’s Likud.

A vision of ‘victory’ for Israel

Ultimately, the essence of the Trump-Netanyahu ‘vision’ is one of victory through defeat and humiliation. Palestinians are granted ‘quality of life’ under occupation with the promise of increased autonomy four years down the line. Israel on the other hand receives formal recognition of its long-held expansionist dreams with minimal or no concessions, today or in the future. Significantly, this vision is extremely close to that promoted by the ‘Israel Victory project’, an initiative launched in 2017 by the US-based pro-Israel Middle East Forum and its president Daniel Pipes, an ardent supporter of both Trump and Netanyahu.

Speaking at an April 2017 event in Philadelphia to launch the congressional component of the Israel Victory project, which has representation in both the US and Israeli legislatives, Pipes explained the essence of his reasoning: “All sides agree that a quarter-century of ‘peace process’ has failed spectacularly […]. Perhaps it’s time to try something new, namely focusing on the essence of the problem, which is Palestinian rejectionism. Perhaps it’s time to give up on post-modern notions of enrichment and return to the proven concept of victory. Perhaps it’s time for our ally Israel to win, and time for the Palestinians to have a chance to improve their lives.”

The fact that a sitting president of the United States has adopted such reasoning and made it official US policy – to the extent that Washington has even edited out references to Israel as an “occupying power” or the word “sovereign” to describe a Palestinian state in a draft UN Security Council resolution – reflects the extent of the present assimilation and Israelization of US Middle East policy.

While in politics everything is reversible, the damage done to US international standing and credibility will not be easily repaired. The sooner the US understands that US and Israeli interests “have never been and cannot be identical” the better. This was the conclusion reached by President Gerald Ford in 1976, a conviction he repeated more forcibly years later in his autobiography, when the US president underscored need for conditionality in US aid; “there had to be some quid pro quo” he explained.

A US return to linkage and preferential but not exclusivist treatment of Israel is what is needed today. This would translate in a more effective and balanced US Middle East policy and ultimately better serve the long-term interests of Israel, the United States and the broader region.

Posted In: Andrea Dessì | US foreign affairs and the North American neighbourhood 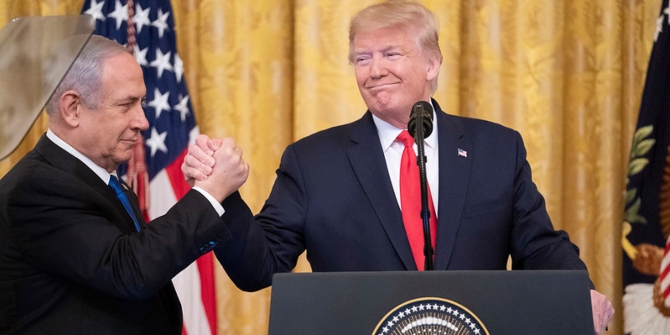