Most US states offer financial incentives to attract businesses to their communities and to encourage the growth of those already there. But how do such incentives affect states’ financial positions? By studying five types of financial incentives across 32 states, Bruce D. McDonald, III, J.W. Decker and Brad A.M. Johnson find that almost all such measures generally lead to poorer state finances. Only job creation programs, they write, appear to be good for a state’s finances.

One challenge governments face is how to encourage new businesses and the growth of existing ones within their community. This encouragement often comes in the form of financial incentives. By offering tax cuts, tax credits, grants, and other incentives, public officials hope that the package offered will entice a business to choose their community over others. A great example of this is the incentive packages that states and local governments offered to Amazon in exchange for bringing HQ2 to their area in 2017. While offering incentives may bring a business to a community, what is the financial impact those incentives have on the government providing them? Although many assume that the activities of incentivized businesses will help the government, the reality is much more complicated.

The decision to offer financial incentives is relatively straightforward. In theory, a reduction in the tax burden for businesses provided by incentives enables a business to stimulate the economy more effectively, providing an economic return on the incentives for the government. And while economic developers have encouraged the use of incentives, they also make good politics. To gain votes and win reelection, politicians need to give the appearance that they are working to solve constituents’ problems and are working on their behalf. One way this can be accomplished is through the expansion of the region’s economy. Given the competition between governments for business to expand the economy in their jurisdiction, public officials need to offer incentives to protect their government from losing business to others. They must also shield businesses within the community from outside competition or failure. Whether a business chooses to accept an incentive or not, the offering of that incentive by the government gives politicians the appearance of taking action on behalf of their constituents.

While there may be new economic activity as a result of the economic expansion provided by the incentives offered, the revenue foregone has important implications for the government. Governments limit their tax revenues by offering incentives which in turn limits the resources and funds they have to provide services, pay for future obligations, and balance their budgets. Incentives may also increase government spending, either by requiring certain expenditures as part of the incentive package or by increasing the demands on government services. Either way, this opens the possibility that the financial incentives offered by a government may ultimately hurt the financial position of the governments offering them.

In our study, we explore the impact of financial incentives on the fiscal health of a government by looking at the incentives offered by 32 state governments in the United States from 1990 to 2015, covering 90 percent of incentives offered during this time frame. To explore the impacts on state’s financial health, we studied five financial incentive types: job-creation tax credits, investment tax credits, research and development tax credits, property tax abatements, and job-training grants. To measure these incentives, we used data from the W.E. UpJohn Institute’s Panel Database on Incentives and Taxes. This data was then matched with government finance data from the U.S. Census Bureau’s Census of Governments to capture a state’s financial condition. 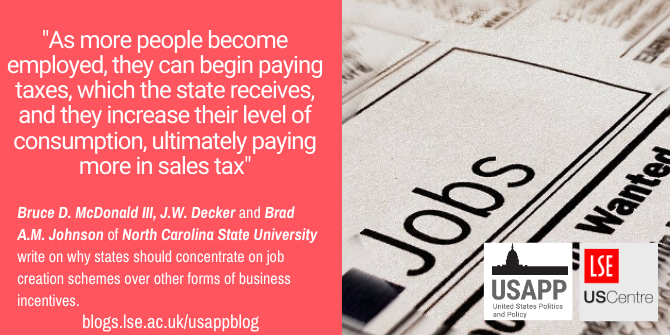 “Jobs Help Wanted” by Innov8social is licensed under CC BY 2.0.

Although previous studies have shown that financial incentives help the economy, we find that incentives generally reduce the overall fiscal health of a government. The size of the reduction varies based on the type of incentive. Property tax abatements, for example, have a significant, but relatively small impact, which is partly due to the dependence of local governments, not states, on property taxes as a form of revenue. Tax credits for research and development had a much larger impact, with a one percent increase in the incentive increasing the efficiency ratio of a state (which measures the ability of the state to pay its expenses with its available revenue) by 11.7 percent and increasing the debt ratio (which reflects the capacity of a state to pay its debts) by 29.3 percent. Interestingly, it was also tied to a 54 percent increase in the state’s dependence upon the federal government for resources.

Alternatively, job-creation tax credits do show some signs of improving the overall fiscal health of states. This shouldn’t be too surprising as these incentives are specifically offered to increase the level of employment with a state. As more people become employed, they can begin paying taxes, which the state receives, and they increase their level of consumption, ultimately paying more in sales tax than they did previously. The path to clear and immediate outcomes associated with this type of incentive is reflected in a reduction of a state’s efficiency ratio.

The quick reaction to our findings is that governments may find it prudent to avoid offering financial incentives. Economically, however, it is necessary to offer incentives to improve the economy of the region, as not offering incentives may mean that businesses will go elsewhere. Rather, what our results suggest is that incentives should be used more cautiously. Given the positive impact of job-creation tax credits, and the direct link of these credits to constituents, governments should be more inclined to focus on these rather than other types. To go even further, while other incentives may hinder the financial position of a government, their use may still be warranted, so long as the understanding of the reality of their impact is understood and considered from the state.

Bruce D. McDonald, III – North Carolina State University
Bruce D. McDonald III is associate professor of public budgeting and finance and director of the Municipal Research Lab at North Carolina State University. Currently, he serves as co‐editor‐in‐chief of the Journal of Public Affairs Education, general editor for the Routledge Public Affairs Education book series, and cohost of the Academics of PA podcast. His research focuses on issues of fiscal health and local governance.

Brad A.M. Johnson – North Carolina State University
Brad A. M. Johnson is a doctoral student at North Carolina State University, where he also serves as a doctoral fellow in the university’s Municipal Research Lab. His research focuses on the interface between organizations and the public, organizational change, public budgeting, and government technology.