Two years ago President Trump introduced tariffs on Chinese steel and aluminum imports, ostensibly to protect US jobs and markets. Mark S. Langevin writes that these tariffs – and China’s retaliation against US soybean exports – may have hit communities in swing states like Pennsylvania, Michigan and Wisconsin the hardest, potentially making his road to reelection rockier this year.

President Trump’s protectionist trade policy could not stop the impressive string of Democratic Party victories in the 2018 mid-term elections, but could still be a pivotal lever for delivering him an Electoral College majority this November. The 2018 blue wave elected Democrat newcomers in suburban districts from California to Connecticut and throughout the Rust Belt, but Minnesota’s 8th congressional district fired a red flare that highlights Trump’s rusty road to victory amidst the uncertainty of the COVID-19 pandemic.

In 2018, Stephanie Rickard wrote on this blog that “politics, not economics” moved Trump to erect a tariff wall against steel (25 percent) and aluminum (10 percent) imports “in order to win votes.”  In March of that year the US government adopted a national security rationale to trigger Section 232 of the Trade Expansion Act of 1962, but many scholars, including Rickard, understood the unilateral trade measure as a political ploy to reward supporters in the steel industry and pave the way for reelection in 2020.

The costs of Trump’s trade war

Trump’s Rust Belt reelection strategy comes with costs, some unforeseen. First and foremost, the Section 232 measures were the first major escalation of Trump’s trade war against China, fueled by the White House’s allegations that the Chinese steel industry dumps subsidized products into the US market. The tariffs delight US steel industry officials and the United Steelworkers union, but they also lower manufacturing employment, foster inefficient trade diversion, and disrupt supply chains. Most importantly, the steel tariffs and Trump’s trade war with China greatly restricted the major export market for US soybeans.

US agribusiness supported candidate Trump early and often in 2016 but ended up paying much of the upfront costs of his trade war. Generous subsidies paid out by the Commodity Credit Corporation and China’s accession to the World Trade Organization in 2001 led to rising soybean acreage and exports to the largest consumer market in the world. Paul Blustein details the “China Shock” that troubled Washington and eventually propelled the Trump administration to push back against Chinese manufactured imports in 2018, thereby jeopardizing soybean farmers’ prime export market.

To help determine how Trump’s tariffs may affect his re-election chances, it’s worthwhile to look at how they played in key seats in swing states in the 2018 mid-term elections. The results from many of these seats confirm that tariffs will likely shape this year’s electoral landscape.

Just months after Trump erected the tariff wall and then kicked off his trade war with China, in Minnesota’s 8th congressional district Republican Pete Stauber garnered 50.7 percent of the vote in a district where logging and iron ore mining interests buck heads with environmental protection advocates. In the mid-term elections, Stauber achieved what few Republicans competing in contested, crossover districts did, he won – just barely. He did not match the president’s 15.5 percentage point edge in 2016 but he did emphasize the president’s protectionist trade policy to nudge out Democrat Joe Radinovich.

Both Sauber and Radinovich supported protection for the iron ore to steel value chain, but it was Stauber who could take all the credit as he stood alongside Cleveland Cliff’s planned $100 million dollar investment in its Silver Bay’s Northshore Mining facility and claimed Trump’s Section 232 tariffs as his own to defend the “Iron Range” of Northeast Minnesota from cheaper, often Chinese imports.

The first year of the trade conflict saw US soybean exports to China drop from $12.3 billion in 2017 to $3.1 billion a year later. China’s retaliatory strike against US soybean farmers tested their political alliance with Trump. The president answered by implementing a gigantic $28 billion ad hoc subsidy program for US agricultural commodity farmers that infused financial resources into the country’s top soybean producing congressional districts.

Massive farm-aid flooded Minnesota’s corn, dairy and soybean producing districts. Even Stauber’s 8th congressional district saw soybean production subsidies explode from less than $1 million annually during the Obama administration to over $7 million in 2018 and $3 million in 2019, distributed among 3,000 farming units. Trump’s calculated combination of steel protection and soybean subsidies contributed to Stauber’s 2018 victory and provided a recipe of sorts for the Rust Belt battleground states where Trump’s reelection hangs in the balance. However, it is not clear that whether the recipe works. In congressional districts with significant soybean acreage, Republican margins of victory declined between 2014 and 2018, allowing Democrats to pick off a few districts in 2018 (Iowa-1 and Iowa-3).

Pennsylvania now at risk for Trump?

Several congressional races in the Commonwealth of Pennsylvania illustrate how Trump’s tariffs and soybean subsidies may play out in November. Pennsylvania is well known for its long history of steel production and is home to two production facilities owned by Nucor, the largest domestic steel producer and major beneficiary of the Section 232 tariffs. By tradition, the leaders of the congressional steel caucus are from this state, including the current chairman, Democrat Conner Lamb of the 17th district. Yet, the Section 232 tariffs have divided the state between producers and downstream steel and aluminum industries to erect a roadblock to Trump’s steel and soybean political play. 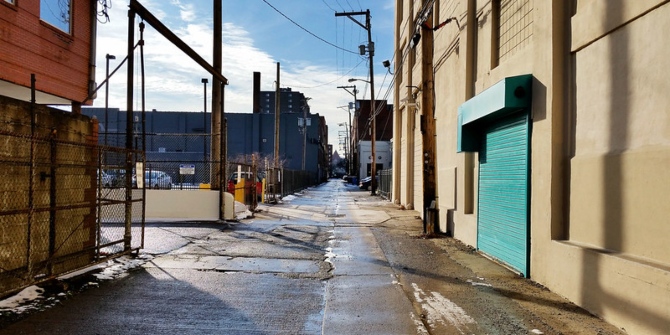 During the mid-term elections, incumbent Republicans Brian Fitzpatrick (1st district-formerly 8th) and Scott Perry (10th district-formerly the 4th) squeaked out victories by 2.5 percent margins. Trump won the state with by a razor thin 0.72 percent margin, but won by 22 percent in Perry’s district and spilt the vote with Democrat Hillary Clinton in Fitzpatrick’s district. Perry’s district pulled in record soybean subsidies in 2018 and 2019, $1.2 and $2.4 million respectively, doled out to 1,500 farming units.  Both Perry and Fitzpatrick’s districts are home to substantial steel-using manufacturing, thereby placing these Republican incumbents in a tough spot. They support Trump and his trade policy approach, but cannot fully embrace the Section 232 tariffs that hamper local manufacturing.

Perry took credit for delivering crop subsidies for his rural constituents, but the farm-aid did not level with the tariff’s accumulating costs; both he and Fitzpatrick face a rocky road to reelection in 2020, as does Trump in the state overall. By late March 2020, the presumptive Democratic Party nominee, former vice-president Joe Biden, enjoyed a Real Clear Politics polling average lead of 3.8 percent.

Just like Pennsylvania, Trump also obtained a narrow margin of victory in Wisconsin, less than one percent. The state’s reliably Republican 1st congressional district, the home of former Speaker of the House, Paul Ryan, may be a bellwether. Republican Bryan Steil garnered 54.6 percent of the vote in 2018, a twelve point margin over Democratic contender Randy Bryce, in a district that Trump won by ten percentage points. Steil benefited from the rush of soybean subsidies racing into his district in 2018, nearly $12 million distributed to over 2,100 farming units, and another $3.6 million in 2019, levels far above the prior annual average.

Agricultural subsidies (including corn and dairy) sent a clear message to Steil’s rural constituents, Trump and the Republicans would support them despite the trade war scare. Like Stauber in Minnesota, Steil ran against a labor backed Democrat who also pushed the 232 Section tariffs, and just like Stauber, Steil could take credit for Trump’s trade policies and agricultural commodity bailout. If Trump’s steel and soybean political ploy is to succeed, it must work to secure Steil’s reelection and Wisconsin’s 10 Electoral College votes for Trump in November. Bad news, a recent examination of congressional approval ratings indicates that Steil is Wisconsin’s least popular congressional representative, and the Real Clear Politics polling average for the Badger State shows  a 2.7 percent advantage for Democrat Joe Biden.

The third toss-up state, Michigan, is home to America’s automobile manufacturers. This industry may have been the hardest hit by the Section 232 tariffs and the trade war because of the immediate increases in steel and aluminum prices in 2018 and higher tariffs applied by China on US auto imports. Yet, Michigan is also home to significant steel production for downstream auto manufacturing. As early as July 2019, US Steel began to lay off workers and close down furnaces at its Great Lakes Works plant as the auto industry recoiled from higher production costs and the trade war with China.

Trump edged out Hillary Clinton in 2016 by only a quarter of a percent in the Wolverine State, which is now governed by Democrat Gretchen Whitmer, an outspoken critic of the president’s response to the Covid-19 pandemic. The Trump administration celebrated its negotiated increase in regional content requirements for the auto industry in the United States–Mexico–Canada Agreement (USMCA), but this could lead to even greater supply chain disruptions, increased production costs and slumping sales to challenge Michigan’s hallmark industry. The economic fallout from Trump’s trade strategy in Michigan blunts its intended political effects to place the president at a disadvantage, with Joe Biden enjoying a 4.4 percent lead in the state’s Real Clear Politics polling average. 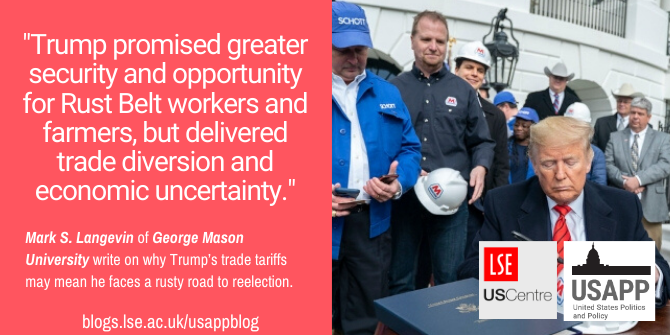 “President Trump at the Signing Ceremony of the USMCA” by The White House is Public Domain.

Last January the Trump administration declared victory when it signed the “phase one” agreement with China to limit the trade war’s collateral damage. The agreement lifts some US tariffs on Chinese imports in exchange for the latter’s promise to buy some $200 billion in US exports during the coming two years, including $32 billion in agricultural products. The bilateral accord sounds good to US soybean farmers and may be a first step toward a comprehensive trade agreement, but there is no guarantee that China can hold up its side of the deal amidst the unforeseen Covid-19 pandemic or a reescalation of the trade conflict as the election season looms. Indeed, as Trump signed the phase one agreement he also expanded the Section 232 tariffs to steel and aluminum derivative products to satisfy industry political donors at the expense of downstream industries.

It is still a long way to November and the Covid-19 pandemic changes everything in profoundly unforeseen ways. Yet, the fundamentals of state by state voter behavior and the Electoral College dynamic are well known. Trump must win at least three of the Rust Belt toss-up states to obtain 270 or more Electoral College votes to win the election. Trump is trailing behind Biden even after unprecedented efforts to protect the steel industry and reward soybean farmers for their political support and recent sacrifice. His approval ratings remain under 50 percent while his responses to the pandemic appear lackluster at best, negligent at worse. It is too early to discount Donald Trump, but there is accumulating evidence that his unique political alloy is beginning to crack where it matters most. Trump promised greater security and opportunity for Rust Belt workers and farmers, but delivered trade diversion and economic uncertainty. More likely than not, these same workers and farmers will determine whether Trumps wins a second term.