In Decolonizing Universalism: A Transnational Feminist Ethic, Serene J. Khader unpacks mainstream feminist approaches to women in the Global South – or ‘missionary feminism’ – to shed light on how to do anti-imperialist feminism in specific contexts through a notion of nonideal universalism. This is a timely interrogation and rejection of imperialist frameworks that maintain a distinction between ‘the West’ and ‘the Rest’, writes Aerin Lai, and will be useful for those engaging with marginalised women and communities in both the Global South and Global North. 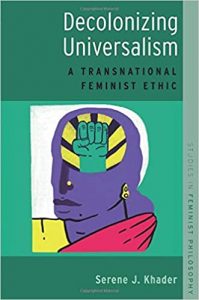 In Decolonizing Universalism, Serene J. Khader addresses pertinent issues surrounding feminist efforts to promote gender equality and dismantle the oppression of women in developing countries. Coming from the fields of philosophy and women’s and gender studies, Khader situates her book in larger academic discussions on ‘transnational feminist praxis’ and decolonisation. Drawing from extant ethnographic research while unpacking mainstream feminist approaches towards women in the Global South, the author sheds light on how to do anti-imperialist feminism in specific contexts while subscribing to some universal ideals.

Khader begins by dissecting mainstream Western feminism, or what she terms ‘missionary feminism’. Like the ‘white saviour complex’, missionary feminism perpetuates imperialism because, at its core, it is underpinned by an Enlightenment ethos. It takes Western cultural forms as the only viable and morally just scenarios (what Khader calls ‘justice monism’), while framing all other women as prisoners of their own ‘culture’ – that is, traditions and rituals that are, in turn, assumed absent in the modern and progressive West. Consequently, the traditions and religions of such cultures are seen as the impetus for women’s subordination. In tandem, this viewpoint sees the West’s lack of adherence to tradition due to its modernity as the ideal that these women need to work towards (see Chapter Three), while perceiving traditions outside of the West as inherently patriarchal wholly because they are non-Western. The inability of Western feminists to recognise wearing the hijab as empowering for Muslim women, or that hijab-wearing Muslim women can be feminists, stems from this assumption.

The Enlightenment ethos also motivates ‘independence individualism’ (see Chapter Two) – the idea that the sole way of circumventing gender oppression for women in the Global South is through the generation of income. This is common in development projects seeking to empower women. However, such approaches render invisible the consequential harms inflicted on these women – what Khader terms ‘imperialist associational damage’ (51). For example, where women’s responsibilities lie in the home, women generating income may lead to ‘feminization-of-responsibility harm’ (54). This occurs when men further avoid providing finances to the household since their wives generate income.

Without recourse to relativism, Khader argues for a nonideal universalism, which highlights the indeterminacy of achieving gender justice in nonideal conditions. Instead of applying universal ideals of what gender justice should look like (which generally takes the shape of ‘Western’ societies), one should instead understand the historicity and context of why ‘other’ women do the things they do. In defining feminism as ‘opposition to sexist oppression’ (4), Khader enables a focus on ‘oppos[ing] practices with certain objectionable effects – irrespective of their perceived origin’ (77, italics in original). This prevents an ethnocentric perspective, which forecloses cultural practices in the Global South as problematic solely because they are not Western. In looking at effects rather than origins, one is able to undertake a more nuanced analysis of social phenomena and whether or not they count as feminist, and if they are oppressive towards women.

In Chapter Four, Khader directs her attention to complementarian gender systems – where women and men have complementary roles (e.g. men work and women take care of the household). Contesting missionary feminists’ disposition towards eliminating all forms of gender roles in favour of gender equality, Khader draws on existing ethnographic work to posit that feminists can still be in support of complementarian gender systems by following a stance of nonideal universalism. In a system where men are seen as guardians of women, it is possible for women to ensure survival through making men more accountable for being a good husband, for example (see 104-106).

Nonideal universalism recognises that while complementarianism may not be feminist because it places more vulnerability on women than men, it may be the best option in encouraging incremental improvements to women’s wellbeing – ‘justice-enhancing’ rather than seeking a just ideal. Particularly in cases of severe poverty, imposing gender-role eliminativism might cause more harm to women. In such situations, a complete destruction of existing social systems (advocated by gender-role eliminativism) would render women even more vulnerable to violence and marginalisation. Instead, nonideal universalism recognises both the nonideal-ness of social conditions and the significance of social contexts and historical specificity that shape these conditions.  For example, in Chapter Five, Khader illustrates how in contrast to Western notions, participation in social decision-making processes for women and communities in the Global South may not occur in the same sites as they do in the West. Feminised power in certain fields within the village where women have more capacity to influence decisions, for example, may not be seen as a legitimate source of power by missionary feminists simply because they occur in sites outside of public institutions recognised in the West (136-137).

Khader’s succinct writing and clear articulation of complex philosophical concepts allow for a deeper grasp of abstract theory. In particular, her extensive use of examples from non-profit organisations to illustrate possible ways of applying nonideal universalism in the real world helps ground readers and prevents them from getting lost in too much abstraction. For example, the inclusion of the Freedom Without Fear Platform UK (45-48) as an example after an elaboration of the theoretical underpinnings of this book further compounds her arguments.

I also appreciate the organisation of the book. Since the author reiterates her main arguments and theoretical understandings across the book, it enables readers to approach each chapter as a standalone work with specific foci. Yet, at the same time, the interconnectedness of each theme – for example, individualism in Chapter Two and autonomy in Chapter Three – helps readers delve deeper into these conceptual structures.

My main concern with the book lies in Khader’s definition of feminism. While I do understand her justification that ‘feminism need not furnish all of our moral commitments’ (42), the unpacking of sexist oppression itself already entails an intersectional framework. Precisely because sexism cannot be divorced from larger global structures that are most commonly located in racial relations, it strikes me as odd that this is not mentioned in her definition. The many examples and key points of her book are inextricably connected to the sustained effects of colonialism and imperialism – for example, her critique of ‘independence individualism’ as an ideology derived from racist ways of seeing men in the Global South as ‘beasts’ that women need to be saved from (Chapter Two). In my opinion, decolonising mainstream feminism could begin by including a perspective sensitive towards the historical contexts and global structures shaping gendered relations in order to understand what it means to be feminist in the first place.

The book will serve students seeking an in-depth overview of the key debates in feminism that have endured since the emergence of second-wave feminism. It serves also as a springboard for anyone interested in the key understandings of postcolonialism and how they interweave with feminism and the legacies of the Enlightenment. At a time when many Western scholars continue to overlook the multitude of non-Western thinkers in mainstream academia, Khader’s book is timely in encouraging an interrogation of frameworks utilised by people when looking at ‘the West’ and ‘the Rest’. Lastly, because of the clear succinct guidelines and prescriptions Khader provides in her rejection of imperialism, Decolonizing Universalism would function well as a toolkit for NGOs engaging with marginalised women and communities not only in the Global South but in the Global North as well.