States’ rights and racism have been two deadly strands in American history which have been brought to the surface in the COVID-19 pandemic. Laura Smith writes that the pandemic shows just how desensitized Americans have become to the risk of more death – especially among communities of color, who have been disproportionately impacted.

With the re-opening of states, Americans who protested against state restrictions in favor of personal liberty appear to be getting their way. However, medical experts such as the Director of the National Institute of Allergy and Infectious Diseases, Anthony Fauci, have since raised the uncomfortable question of just how many deaths Americans are “willing to accept.” New York’s Governor, Andrew Cuomo, has declared that every human life is “priceless,” whilst defending his decision to continue restrictions in his state. While this sentiment valuing human life is a core tenet of his Catholic faith, it is also a belief that may be expressed by other governors but is not reflected in their decisions to re-open their states.

It is possible that governors are buckling under the pressure to lift restrictions as part of the Trump administration’s effective employment of a shock and awe messaging strategy. At the end of March, when the White House announced the potential of between 100,000 and 240,000 American lives being lost to the coronavirus (COVID-19), this sobering statistic helped propel the nation into lockdown. As time passed and the economy continued to crumble, the patience of the American people began to waver. Donald Trump, who is distinctly aware of the countdown to the November election and cannot help but notice that many protestors of state restrictions have been displaying his re-election paraphernalia, emphasized the decline of projected COVID-19 fatalities during April.

The transition to a lower fatality rate, from the humbling high numbers of deaths originally projected, alongside Trump’s support of protestors, has created a false sense of security that encouraged Americans’ demands to re-open. Despite the anticipated rise in COVID-19 cases in states where the lockdown has been lifted, Americans appear to be de-sensitized to the prospect of the fatality rate reaching the 100,000 to 240,000 that was originally projected. Arguably, this lack of any overt concern may be reflective of an implicit racism that plagues American society and could be driving a dismissive reaction toward the fate of minorities, who are overwhelmingly being impacted by the pandemic. This outcome of an acceptance of a high death rate, suits Trump’s overriding concern over the health of the American economy, which he likely deems as critical to his re-election prospects. 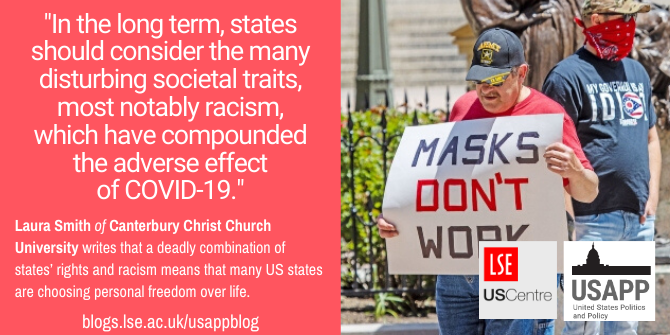 Why are Americans seemingly so desensitized to death?

Issues at the heart of America’s culture wars provide insight into possible causes for Americans’ willingness to accept a high death rate during this pandemic. Currently the death penalty, which has a long and controversial history, is legal in twenty-eight states.

Perhaps the high-rate of gun related death in America, in comparison to other highly developed countries, has further de-sensitized Americans toward the concept of death. Indeed gun-toting protestors filled the Michigan state house, whilst displaying Confederate and Nazi symbolism and nooses, indicative of the explicit racism of white supremacy. Second amendment advocates often stress individual freedom and liberty, making their opposition to state restrictions on freedom of movement unsurprising.

A rise in violent encounters over state regulations requiring masks has escalated across the country. While people of color wearing masks have the added concern over racial profiling and being perceived as a security threat, some regions have rolled back regulations in the face of violence. In Stillwater, Oklahoma, the mayor revoked the regulation demanding the use of masks, after workers received a torrent of abuse.

The advent of symbols of white supremacy, however, are particularly unsettling considering that the brunt of COVID-19 afflictions are being felt by African American and Hispanic communities. A study conducted by amfAR emphasizes this disparity as whilst 22 percent of American counties are largely populated by African Americans, these counties make-up 58 percent of COVID-19 deaths. In Chicago, concerns have recently been raised over the high proportion of Hispanics impacted by COVID-19 and a Washington Post-Ipsos poll has similarly found that Hispanics have nearly double the likelihood of job loss than whites, showing the role of race in producing economic inequity.

The racial disparity of COVID-19

Many factors have been considered as heightening the risk of COVID-19 to communities of color, almost all of which are symptomatic of racial barriers in American society. The Centers for Disease Control and Prevention (CDC) have cited environmental factors such as “residential segregation” and “over-representation in jails.” People of color are also adversely affected in their work, with African Americans constituting 30 percent of nurses and almost 25 percent of employed African Americans and Hispanics working in the service industry. In contrast to whites, Hispanics and African Americans are three times and twice more likely to respectively lack healthcare coverage, leading to a higher likelihood of underlying health conditions. These underlying health conditions could be exacerbated by an unhealthy living environment or poverty restricting access to nutritious food. With the majority of African Americans living in ruby red southern states, their lives are further impacted by the laissez-faire approach of Republican governing in regions whose history is defined by explicit racism.

Although current Democratic Michigan Governor Gretchen Whitmer has condemned the protestors and their symbolism as not representative of the state, it will take more than words to convince communities of color that their health is equally valued. This is especially the case after a Family Dollar security guard was shot and killed in Flint in early May, after telling a customer to comply with state regulations and wear a face mask.

Although a Washington Post-University of Maryland poll recently found that 78 percent of Americans expressed discomfort at the thought of going to a sit-down restaurant, on the other end of the spectrum, police have continued to have to disperse public gatherings. The consistent divide when responding to the pandemic has correlated with ideological persuasion, with some Trump supporters continuing to claim that COVID-19 is a “hoax,” as President Trump did at a South Carolina rally at the end of February. Scientific evidence has been rebuffed as a Floridian attending a Cinco de Mayo tailgate party remarked, “Well, 6 feet means many things to different people.” Notably, Republican Governor Ron DeSantis has followed the thrust of Trump’s rhetoric when deciding where and what to re-open in Florida, appearing close to the administration during his recent visit to the White House. Advocates for re-opening have the clear advantage of visibility as they dismiss concerns over public gatherings, leaving a silent majority consisting of moderate conservatives and liberals at home.

Despite the immense economic and political pressure, states must prioritize health and socio-cultural concerns. While it may be unpopular with their loudest constituents, it is the job of governments to prevent anarchy and protect people, even if it means protecting them from themselves. States’ rights has been a concept of deadly consequence in American history and as the federal government under the Trump administration has abdicated responsibility for protecting Americans through any national regulations or an organized dispersal of medical equipment, state governments must step up. In the short-term, lives need to be saved by continuing social distancing measures supported by scientific evidence and in the long term, states should consider the many disturbing societal traits, most notably racism, which have compounded the adverse effect of COVID-19.