Following the recent police killing of George Floyd, recent months have seen Confederate monuments and symbols removed from public display in parts of the Southern US and elsewhere. And while Southern Republicans generally oppose Democrats who are pushing for these changes, this is a relatively recent development, argue Christopher A. Cooper and co-authors. By analysing public opinion data, they find that up until the 1990s, there were no partisan differences among white southerners on opinions toward Confederate symbols.

In the ongoing and contentious conversation about Confederate symbols, one thing is taken as a given: compared to Republicans, Democrats are more likely to support removing displays of the Confederate past which had been publically approved in the past. This fact is evident in public opinion polls and in the results of recent votes in state legislatures, like the one in Mississippi where every Democrat voted to remove the Confederate emblem from the Mississippi state flag, while Republicans split on the issue.

Although there is a clear partisan divide on how to handle monuments and memorials erected in tribute to the South’s Confederate legacy, glancing at recent public opinion polls and legislative outcomes may lead to the false conclusion that this partisan view is a permanent, or at least a long-term, feature of American politics. In recent work, we have determined that the shift in opinion on Confederate symbols in the South is relatively recent and reflective of the broader racially influenced partisan realignment in American politics which has been underway over the past several decades.

At the legislative level, the partisan division coincides with significant events that have brought their political implications into sharp focus. Consider North Carolina, for example. In 2015, the “Cultural History Artifact Management and Patriotism Act” guaranteed that monuments and statues on government property in the Tar Heel State could not be removed unless they presented a public safety threat. This bill, similar to many others circulating around the South at the time, was introduced in the State Senate in February 2015 and passed with unanimous Democratic support in April. However, the horrendous murders on June 17, 2015, at Emanuel AME Church in Charleston, South Carolina, caused legislators and the public alike to look differently at the issue. By the time the bill came up for debate in the North Carolina House, only two Democrats voted in favor.

Some of us found that a similar pattern exists in public opinion on the Confederate battle flag. Prior to the Charleston church shooting, there was no difference in the opinions of white Democrats and white Republicans in South Carolina on whether they want to “continue to fly the Confederate flag.” But three months after the Charleston massacre, opinion had sorted by partisanship with white Republicans being more than 18 percentage points more likely to support flying the flag than their white Democratic counterparts (controlling for other factors). 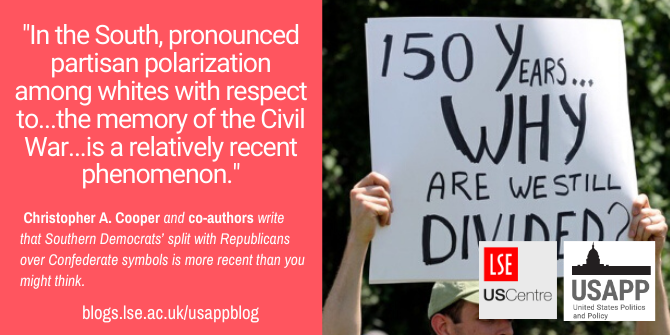 In recent research, we analyzed a host of public opinion data about Confederate symbols and Confederate memory in the South and came to similar conclusions. For example, from the 1970s to the mid-1990s, there was no partisan difference among white southerners on opinions toward the Confederate flag; differences began to emerge after the mid-1990s and accelerated in the 2000s. Similarly, white opinions on Civil War memory (e.g., thoughts on the removal of Confederate monuments and the cause of the conflict) generally showed no partisan differences throughout the 1990s and 2000s, but showed large differences in the 2010s.

In the South, pronounced partisan polarization among whites with respect to the Confederate flag, Confederate monuments, and the memory of the Civil War, therefore, is a relatively recent phenomenon. While a slow evolution of partisan polarization has been occurring for years, focusing events like the Charleston church shooting, or the recent police killing of George Floyd, provided the spark accelerating the rate of change and fostering a more pronounced division on racial issues that until now showed little difference between the views expressed by white Democrats and white Republicans.

For practitioners and lawmakers seeking policy solutions, these findings reinforce that in the face of focusing events, attitude change can be unusually rapid. Indeed, just a few years ago, many of the most fervent supporters of the Lost Cause (which posits that the Confederate states had a just or heroic cause in the Civil War, while denying the role of slavery and White supremacy) were actually southern white Democratic legislators (like those state senators in North Carolina). Now, instead of a fissure within the Democratic Party over racially laden symbols of a Confederate past, white and black Democrats (elected officeholders and those in the electorate) are more unified than ever in calling for their removal from the public square. In contrast, it is within the ranks of Republicans where factionalism is currently more prominent, as many GOP adherents have relented because honoring and praising the Confederate legacy may be considered bad for business, while other Republicans continue to champion the Lost Cause, because ironically, they are the descendants of a one-party Democratic political system, whose entire reason for being was to uphold white supremacy.

For scholars and observers of the South’s politics, it is hardly surprising that the evolving partisan positions on the Confederate legacy once again speak to a tragic racial history that continues to shape and guide the administration of the region’s contemporary public affairs.

Seth C. McKee – Oklahoma State University
Seth C. McKee is a Professor of Political Science at Oklahoma State University. His primary area of research focuses on American electoral politics and especially party system change in the American South. He has published numerous articles on such topics as political participation, public opinion, vote choice, redistricting, party switching, minority representation, strategic voting behavior, and state legislative voting behavior. McKee is the author of Republican Ascendancy in Southern U.S. House Elections (Routledge 2010), the editor of Jigsaw Puzzle Politics in the Sunshine State (University Press of Florida 2015), and author of the textbook, The Dynamics of Southern Politics: Causes and Consequences (CQ Press 2019). McKee serves on the editorial boards of American Politics Research and Political Behavior, and is the Editor in Chief of Political Research Quarterly.