With the Democratic National Convention in the rearview mirror, Republicans will use their own convention this week to try to resuscitate President Trump’s re-election bid. In this Q&A, Thomas Gift examines how Democratic presidential nominee Joe Biden is positioning himself in the race for the White House, how Trump will deflect criticisms, and what it means for the 2020 election.

A big challenge for Biden at the Democratic National Convention was to bring together the moderate and progressive wings of the party. Was he successful?

In the short term, “yes”; in the long term, “doubtful.” The rhetorical messaging coming out of the Democratic convention was united and consistent. Yet that doesn’t mean Democrats have resolved the major underlying tensions that exist within the party. Biden will still need to work hard at reassuring progressives that he represents their values. Moreover, bridging the moderate-progressive divide will remain a challenge for Biden even if he wins in November. The two wings of the Democratic Party may share many of the same goals, but it’s a mistake underestimate how much they differ on the substance of major policy issues such as healthcare, the environment, and taxation. Look for Trump to try to play up those divides.

Democrats have long railed against Trump’s character. Is the 2020 election more about Trump’s personal qualities than policy?

Clearly, Biden wants to make this election a referendum on Trump’s character and general fitness to lead. Policies are important, but Biden’s central pitch is that the country needs a president who is decent, who puts the nation before himself, and who fundamentally unites rather than divides. That was particularly evident at the Democratic convention when Biden insisted that it was time for America to overcome the current period of darkness. Democrats think they’re well-positioned to make 2020 a debate about the ethical fabric of the nation. Their challenge is to dissuade voters from compartmentalizing morality by excusing or overlooking Trump’s character flaws simply because some may prefer his policies.

At their own convention this week, Republicans will look to counter the negative characterization of Trump by Democrats. What can we expect?

The Republican playbook is straightforward: paint Biden as beholden to the far left of the Democratic Party. That’s a tougher sell against Biden than if Democrats had nominated a true progressive, but it’s one of the only options they have. Expect Republicans to invoke the term “socialist” to describe Democrats and to malign Biden as a “Trojan horse” for the “radical left” who Republicans say want to defund the police, take away guns from law-abiding citizens, and swing open the borders. In terms of the White House’s record, Republicans will zero in on several aspects of Trump’s tenure: tax cuts, conservative judicial appointments, a tough stance on immigration, and a strong economy prior to COVID-19.

The coronavirus continues to plague Trump’s presidency. How will it feature at the Republican convention?

The short answer is that it won’t. The party will make rhetorical nods to the public health professionals working on the frontlines against the pandemic, but otherwise the grim US data on infections and deaths aren’t part of the record on which Trump wants to run. Trump may be tempted to use his platform to make conflicting statements about the seriousness of the coronavirus and to boast that many schools and businesses are reopening. But that’s a tough sell given the precarious state of where COVID-19 stands. The downside of ignoring the coronavirus at the convention, however, is obvious: It risks seeming tone deaf, or at least dismissive of the most serious problem overhanging the country today. 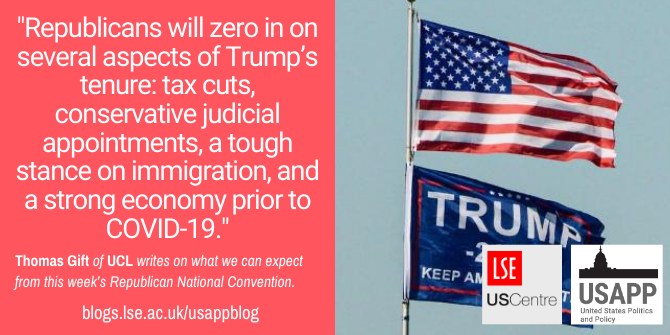 Photo by Dalton Caraway on Unsplash

Last week, a secretly-taped audio recording was released in which President Trump’s sister called him “cruel” (among other unflattering descriptions). Could that story affect the race?

Simply put, the tapes are shocking, but not surprising. They align with critique after critique that we’ve heard regarding Trump’s both public and private persona. Taken at face value, they depict a leader lacking in decency and empathy—charges that were on full display by Democrats at their convention. One of Trump’s tried-and-true tactics when presented with these kinds of personal firestorms is to claim that he barely knows the accusers or to insist they’re operating with ulterior motives. That’s hard to do here when it’s Trump’s own sister commenting in secretly recorded audio. Still, these indictments of Trump’s character are so well-trodden that it’s hard to see the story changing the minds of many voters.

Pollsters favor Biden to win the election. But could the race tighten up?

Biden enjoys a roughly 8 percentage point lead in the national polls (and will likely enjoy a post-convention bump beginning this week). But Democrats aren’t taking anything for granted—a message that party leaders repeatedly stress. In mid-/late-August 2016, Hillary Clinton had a roughly 5 to 6 percentage point lead over Trump, and experts had her as a strong—if not overwhelming—favorite. As we saw, there are no guarantees in politics. Not only do polling gaps tend to narrow as we get closer to Election Day, but it’s the Electoral College, not the popular vote, that determines the outcome. With two and a half months left between now and November 3rd, a Biden win isn’t a given—even if he has to like his odds.

Thomas Gift – UCL
Thomas Gift is a Lecturer of Political Science at UCL, where he is director of the Centre on US Politics (CUSP). He is also a Visiting Fellow at the LSE US Centre.