For nearly fifty years Minnesota has voted for a Democratic President. Mark Langevin reminds us that Donald Trump only lost the state by a narrow margin in 2016, and that in this year’s election, the incumbent President will be looking to gain the state for the Republicans. To win the North Star State, Trump will need to run up the vote in the counties which he flipped four years ago, and expand his electoral base in counties next to the Twin Cities.

This year, there is talk of Arizona, or even Texas flipping to the Democrats and their presidential candidate, former Vice President, Joe Biden, but the axis of the 2020 presidential election is in fact pointed directly at the North Star State of Minnesota. The state has been the serene bastion of Democratic presidential contenders ever since Republican Richard Nixon secured its 10 Electoral College votes in 1972. For decades Minnesota leaned ice blue Democratic, but that changed in 2016. Republican candidate Donald J. Trump fell short of taking the state by losing to Democrat Hillary Clinton by 44,593 votes. Trump lost the state but pushed its center of political gravity toward the Republican universe. Clinton prevailed in Minnesota by a narrow 1.5 percent margin, but rural and suburban counties embraced Trump by large majorities.

To win reelection, Trump needs to paint Minnesota red. Polls consistently show an advantage for Biden, but the Electoral College is a fickle constitutional artifact whose spirit currently provides Republicans with a shortcut that still haunts Al Gore (2000) and Hillary Clinton (2016). Trump fixed his campaign to its skew in 2016 and will do the same this year, but a rerun is unlikely. He trails Biden in most of the Rust Belt battleground states that he flipped in 2016 to win the presidency. This year he will not replicate all of his Electoral College takings in Michigan, Ohio, Pennsylvania, and Wisconsin as he did in 2016. To win again, Trump needs a different route to 270 electoral college votes. Something has to give.

Trump’s alternative paths to victory crisscross the state’s rural counties where large majorities of white, non-college educated voters are ardent Trump supporters. Of Minnesota’s 87 counties, nineteen gave advantages to Obama in 2008 and 2012 but flipped to hand Trump winning margins in 2016 that varied from 2 percent to 28.7 percent. These pivotal counties now push the state toward the Republican column and together serve as the tipping point for the electoral college tally. The question is whether they can deliver up the additional votes Trump needs to surpass Biden’s total from the densely Democrat Twin Cities metropolitan area of Minneapolis and St. Paul. All things being equal, Trump needs 46,000 additional votes to take Minnesota’s ten electoral college votes.

Currently, the state reports it has 3,460,663 registered voters. Minnesota offers citizens voter registration on the day of elections and the Trump campaign needs to capture a majority of these votes on November 3rd. On average, 17.5 percent of votes cast in presidential elections since 2000 come from voters who registered on Election Day. Given an optimistic 18 percent same day registration rate, the total number of registered voters could surpass four million in November. The state’s presidential election voter turnout rate averages 74.7 percent since 2000, the highest in the nation. If this year’s voter turnout surpasses the average then the number of ballots cast could reach 3.3 million or approximately 323,000 more votes than the 2,944,813 votes cast in 2016. Trump would need a 14.2 percent margin of these additional votes to get to the 46,000 threshold.

The nineteen pivotal counties which Trump flipped in 2016 are the most advantageous terrain for the President in 2020, but make up only nine percent of the state’s registered voters. In 2016 they accounted for 271,550 presidential votes. Today, these counties report 312,226 registered voters and could deliver up 295,000 presidential votes if the same day registration rate hovers around 18 percent and overall turnout rises to 78 percent. Given this optimistic forecast, pivotal counties may offer up to 23,450 additional presidential votes. President Trump is expected to over perform in these counties with margins ranging from 2 to 30 percent. His average margin of victory in the seven largest pivotal counties was 5.54 percent in 2016. If Trump over performs and achieves a 20 percent average margin over Biden in 2020 then he could harvest over 14,000 new votes, but still fall 32,000 votes short of closing the gap on Biden. 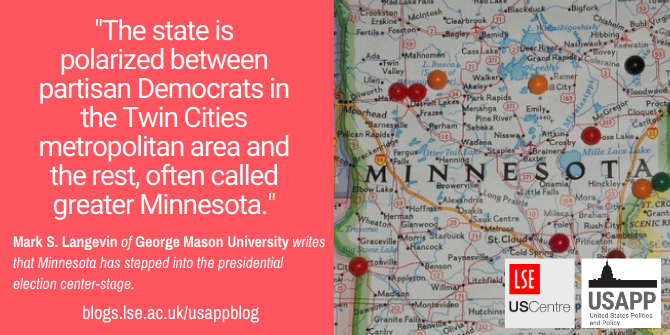 In other words, Trump must increase voter mobilization in a state already ranked highest in the nation. Minnesota’s same day voter registration encourages high turnout, but existing high registration rates make it extremely difficult to identify and mobilize new voters through Get Out The Vote (GOTV) drives. Trump needs to change voters’ minds to flip Minnesota.

Can Trump Close the Gap Statewide?

The state is polarized between partisan Democrats in the Twin Cities metropolitan area and the rest, often called greater Minnesota. Trump must run up his majorities in the pivotal counties, retain suburban white voters who may have voted for Trump in 2016 but supported Democrats in 2018, and pick up new “law and order” voters disturbed by the protests following the police killing of George Floyd on May 25, 2020 in Minneapolis. Last, he could work to obtain a majority of the 227,430 votes cast for third party candidates in 2016. Trump could add another 22,743 votes if he could squeeze out a 10 percent margin among these former third party candidate votes.

As it stands, Biden currently enjoys a Real Clear Politics rolling average poll advantage of 8.8 percent in Minnesota with a range from Tie to 9 percent in statewide polls from August 8 to September 10. The Democratic advantage is also confirmed in recent presidential approval polls which show Trump’s approval rating between 45 and 35 percent. To make matters worse for Trump’s prospects, in past years the Democrats have outperformed Republicans in voter registration during the run up to elections in recent years. Trump is running behind Biden, but he remains within striking distance if he can reverse these trends down the home stretch. Can Trump pick up another 10,000 to 15,000 votes in the counties surrounding the Twin Cites to win the state and electoral college?

Trump needs to best his 2016 performances in Anoka, Carver, and Scott counties were he obtained winning margins ranging from 10 to 15 percent in 2016. In the end, Trump needs to win Washington county just east of the Twin Cities. In 2016, Trump lost this county by 2,657 votes. He needs more votes to win the county and close the statewide gap. Trump could take the state with a 5 percent margin in Washington County, providing an additional 10,000 votes to inch over Biden’s total.

Trump’s decisive challenge is to expand his electoral base in the counties adjacent to the Twin Cities. This task explains his sustained social media focus on the suburbs and claims that Biden would usher in an era of mounting social unrest and anarchy. Suburban voters threw majority support to Democratic congressional candidates in 2018, but the Trump campaign hopes that the unruly protests against the police killing of George Floyd can push the political pendulum toward a winning majority in Minnesota. Recent polling has Trump and Biden tied among suburban voters, making the North Star State the axis of this year’s presidential election. Minnesota was never the brightest star in the Electoral College universe, but in 2020 its ten Electoral College votes now stand at the center-stage of national politics.