Supreme Court Justice Ruth Bader Ginsburg passed away last week, with the public narrative quickly shifting away from a remembrance of her legacy to how the political battle over her replacement would affect the presidential election. Lauren C. Bell reflects on the important legacy of an ‘unlikely icon’, and how Ginsburg’s death has placed the US Supreme Court at the center of US politics.

Americans are not known for their attentiveness to politics or government, and surveys routinely show that many can’t name a single justice on the US Supreme Court. So, it is somewhat incongruous that the death of Associate Justice Ruth Bader Ginsburg late last week would plunge into mourning not only the country’s legal elite but also legions of citizen fans of the Notorious RBG—although perhaps no more incongruous than for a sitting justice to be celebrated as an action figure, fitness guru, Hollywood subject, and a fashion icon in the first place.

Justice Ginsburg’s death on September 18 at age 87 reverberated not only at the Supreme Court, which is now left without its strongest advocate for women, and where both current and former justices remembered and praised her, but it also echoed across the country and the world.

Justice Ginsburg was an unlikely icon. In person she was reserved and diminutive; in recent years she would respond to effusive introductions at speaking engagements by expressing surprise that people were so interested in her. Ginsburg was especially, although not exclusively, admired by women—including women who came of age over the last thirty years, whose increasingly greater access to social, economic, and political opportunities followed directly from her advocacy for gender equality during the 1970s.

Her record as an attorney included successful arguments in front of the Supreme Court challenging state and federal laws that treated men and women differently in the jury selection process (Duren v. Missouri [1979]) and in the process of applying for and receiving Social Security and military spousal benefits. Although she did not argue the case, Ginsburg also worked on Craig v. Boren (1976), the case out of which the Court’s intermediate scrutiny test was developed. That test, which is still used, requires a demonstration that any law that treats men and women differently must be substantially related to achieving an important government objective if it is to be upheld.

Ginsburg’s career as a judge began in April 1980, when President Jimmy Carter nominated her to a seat on the US Court of Appeals for the District of Columbia circuit. She was confirmed by the Senate by voice vote just two months later; it was during her service on the D.C. circuit that she began her long-standing friendship with her future colleague on the US Supreme Court, then-Judge Antonin Scalia. In his remarks announcing her nomination to the Supreme Court in 1993, President Bill Clinton noted that “over the course of a lifetime, in her pioneering work in behalf of the women of this country, [Ruth Bader Ginsburg] has compiled a truly historic record of achievement in the finest traditions of American law and citizenship.” In tribute this week, Justice Sonia Sotomayor echoed that sentiment, writing: “She spent her life fighting for the equality of all people, and she was a pathbreaking champion of women’s rights.”

A Pitched Battle to Replace Her

Justice Ginsburg’s very public friendship with Justice Scalia was a visible reminder that the Supreme Court’s justices tend to agree more often than they disagree. Institutional norms of following the precedent set by past cases and the cut-and-dried nature of many legal questions simply don’t make for landmark decisions in most cases.

But the ability to appoint Justices to the Supreme Court has long been considered the most important spoil of winning the presidency. Presidents count on Supreme Court appointments to help them to secure a legacy. Congress is seemingly less and less capable of reaching consensus on important public policy questions, and negative partisanship and diminished congressional capacity have made the courts the principal forum for resolving significant civic problems—a fact that Congress tacitly condones by leaving it to the executive and judicial branches to sort out unclear laws. The fervor over the two most recent Supreme Court appointments, those of Justice Gorsuch and Justice Kavanaugh, shows the extent to which the courts are considered prizes to be captured by the political branches and the two political parties vying to control them.

And so that is why within a matter of hours after Justice Ginsburg’s death, the conversation shifted to how replacing her would affect impact on the November 3, 2020 presidential election and reshape the Supreme Court. Even as he commended her life, Senate Majority Leader Mitch McConnell announced his intention to hold a vote on President Trump’s nominee to replace her, while Democratic Party presidential nominee Joe Biden called on McConnell to allow the person elected on November 3 to make the nomination, as McConnell had demanded in 2016, when Justice Scalia died ten months prior to the presidential election being held that year. That year, Senate Republicans refused to hold confirmation hearings on Merrick Garland, President Barack Obama’s nominee to replace Justice Scalia.

Many Democrats believe they were robbed of a Supreme Court seat in 2016; even prior to Justice Ginsburg’s death, part of their argument to voters in 2020 has been that the Supreme Court is too important to allow President Trump additional opportunities to choose its justices. 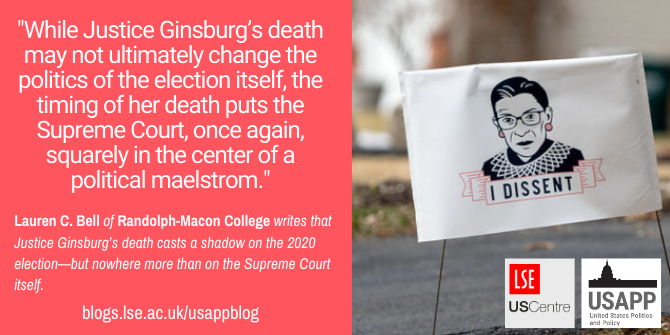 “I Dissent. Ruth Bader Ginsburg lawn sign in a Minneapolis suburb, Minnesota” by Lorie Shaull is licensed under CC BY SA 2.0

Now, there is little they can do to prevent Trump from making an appointment.

In 2013, Democrats used a procedural maneuver to eliminate the possibility of filibustering on most judicial nominations—a decision that then minority-leader McConnell cautioned they would come to regret. Indeed, in 2017, as Majority Leader and with a Republican in the White House, McConnell maneuvered to eliminate the filibuster on Supreme Court nominations—leading to Gorsuch’s and later Kavanagh’s confirmations. As I predicted at that time, Democrats gained nothing and lost much by filibustering Gorsuch’s nomination. (It is true that McConnell would almost certainly have tried to eliminate the filibuster during Kavanagh’s confirmation, but it is less clear that he would have been successful given the controversy surrounding that nomination.)

Already the fund-raising appeals and social media campaigns to stop Republicans from seating a third justice in four years have begun in earnest. These may put pressure on electorally vulnerable Republican senators, but in the absence of the ability to filibuster a nomination, Democrats and their supporters cannot themselves prevent the Republican-controlled Senate from confirming President Trump’s nominee; their only hope is for four Republican senators to defect and refuse to vote on a nomination.

Assuming that President Trump’s nominee is minimally qualified, four Republican defections are unlikely. Indeed, with Senators Cory Gardner and Mitt Romney indicating that they are prepared to move forward, there are not likely four senators who even might defect.  Moreover, McConnell does not have to move toward confirmation prior to November 3, so he can avoid putting vulnerable Republicans on the record prior to the election. Even if Biden wins the presidency and enough Democrats win Senate seats to claim the majority on January 3, the Republicans will still have the time and almost certainly the votes to confirm President Trump’s nominee during the 60 days in the lame duck session. If the vulnerable Republicans which Democrats hope to sway lose their elections, they will be unconstrained by electoral concerns and under significant pressure to vote to confirm, which most could then do without consequence. They’ll still be less constrained even if they win; six years is an eternity in American politics.

The Vacancy and the 2020 Election

Inasmuch as the confirmation of Justice Ginsburg’s successor is likely already a done deal, it also seems unlikely that her death will dramatically affect the normal dynamics of the presidential election, despite some initial claims to the contrary.  In the immediate aftermath of Justice Ginsburg’s death there were suggestions that the prospect of President Trump replacing the justice so revered by so many women would galvanize that group and potentially affect the election. Indeed, Democrats set new fundraising totals in the 48 hours after her death.  Other takes suggested that Trump would benefit from the distraction Ginsburg’s death provides from his handling of the pandemic.

But early voting has already started in several states. And unlike in years past, there are relatively few undecided voters this year. Single-issue abortion voters—who typically are invested in Supreme Court appointment politics—were almost certainly already planning to vote for Trump. Suburban women—like many of the legions of Notorious RBG fans—had already been moving away from the Republican Party and Donald Trump before Justice Ginsburg’s death. And, anyone that was casting a vote with an eye toward the Supreme Court likely already assumed that the next President would choose Justice Ginsburg’s replacement.

While Justice Ginsburg’s death may not ultimately change the politics of the election itself, the timing of her death puts the Supreme Court, once again, squarely in the center of a political maelstrom. At the William and Mary Law School’s Institute for Bill of Rights Law’s annual Supreme Court preview a few weeks ago, court-watchers noted that the Court was already braced for an active fall, expecting to be called upon to decide any number of questions relating to election procedure and ballot counting. With just eight justices available to hear cases, a tie vote allows the lower courts’ decisions to stand, while any decision by the Court at less than full capacity risks being perceived as illegitimate by those on the losing side.