On Saturday 7 November, Joe Biden was called as the winner of the 2020 presidential election. But the 2020 election was about more than just the presidency. Peter Finn and Robert Ledger introduce our new mini-series, ‘What Happened?’, which will explore aspects of the 2020 US elections at the presidential, Senate, House of Representative and state levels, and will also reflect on what the election results will mean for US politics moving forward.

In the end it was all for naught for Donald Trump’s re-election chances; the tweets, the public spats, the close quarters rallies during a pandemic, the dog-whistling, the bizarre pronouncements, the legislative victories and the judicial appointments. Though it took a few days to fully filter through, the US electorate has made Trump the first one term president since George H W Bush in the early 1990s.

In recent weeks, Trump has cut an increasingly desperate figure. Though boosted by family members and a circle (albeit a decreasing one) of hangers-on, his behaviour has appeared out of step with reality. Perhaps most bizarrely, on the morning after the election he openly called for some votes not to be counted. This is not, and should not be accepted as, normal behaviour for an elected official.

After four years where he has driven the narrative from 1600 Pennsylvania Avenue, Trump will lose his bully-pulpit on January 20th, 2021. Just as his disorientating campaign dispensed with Hilary Clinton in 2016, so President-elect Joe Biden’s centrist narrative has done for Trump. Further down the ballot, the picture is more mixed, with Republicans looking likely to have held onto the Senate, clawed back a small number of House seats and maintained control of many state governments.

The election of any new US president is of historic importance. Yet, Biden will take power at a time of particular historic significance, matching (and perhaps even surpassing) the changes wrought by the end of the Cold War. The exact shape of the political universe that will emerge from the COVID-19 pandemic is unknown, but it will be Biden who will have a chance to shape it.

There is also the fact that Kamala Harris, who is of Indian and Jamaican heritage, will be the first female Vice President; an event of clear historic and contemporary significance in and of itself.

By the morning after the election a narrative developed that polling around the 2020 election, which had generally shown Biden with a high single digit lead against Trump in the closing weeks of the campaign, had been completely wrong. At this point, Trump was leading in the vote count in enough states to give him a significant provisional lead in the Electoral College. In reality, the election results were more of a draw than that, with aspects to please both Democrats and Republicans.

By Saturday November 7th, the slow burn release of results from postal voting had reversed Trump’s initial lead to the extent that Biden had been called as the victor in the key states of Wisconsin, Michigan, Arizona and Pennsylvania (though admittedly there was, and remains, some difference between which media outlets have called which states). As things stand, Biden is ahead by 5.6 million votes, gaining 50.9 percent of the vote overall and 3.6 percent more of the vote than Trump. He also appears likely to win the Electoral College by around 60 votes.

As such, though Biden did not come close to matching the lead shown in the national polls, the initial narrative that the polls were completely wrong also appears overplayed. Biden won millions more votes than any presidential candidate in history, increased the share of the Democratic vote in percentage terms over 2016 and flipped four (perhaps five) states. These are not insignificant achievements. Importantly, Biden appears to have outperformed Democrat candidates in state-wide and congressional races, suggesting he was more popular than the party itself, or alternatively that core Republican support is stronger than the presidential election suggests. 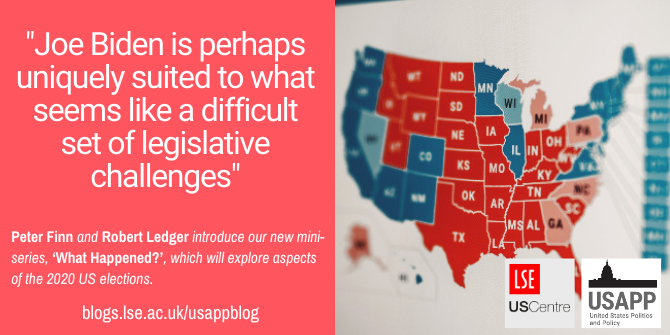 Photo by Clay Banks on Unsplash

Republicans Turn to the Midterms

Although it is unlikely many will admit it publicly (at least while Trump still has large numbers of devoted supporters in the party’s base), for many Republicans, the end of the Trump Presidency will likely be met with a sigh of relief. The collapse in votes linked to Trump predicted in some polls did not materialise. Indeed, Trump actually had millions more votes cast for him in 2020 than 2016.

Down ballot, the Republican Party gained a small number of seats in the House of Representatives and appear likely to hold the Senate (unless the Democrats can win Georgia’s two Senate seats in January runoff elections), thus giving them either a route to block Biden’s policy agenda or extract concessions. Moreover, with the next set of midterms now less than two years away, campaigning in earnest for November 2022 is likely little over a year away. Not to mention the early maneuvering for the 2024 presidential race that will almost certainly begin in the next few months.

Biden faces huge challenges when he takes office in January; a Republican-led Senate is unlikely to pass the more ambitious legislation favoured by the left-wing of the Democratic Party. First and most urgently is the coronavirus pandemic. Here, Biden is already putting together a task force and is likely to be able to enact policy more easily through the office of the White House. His job could also be made more straightforward if viable vaccines become available in late 2020 or early 2021.

Yet, significant structural reforms are likely to be more difficult. During the primaries, many Democratic supporters and politicians urged far reaching social change: on long-running inequality, racial injustice, police reform and climate change. Biden, however, will be hamstrung from day one in passing any legislation, let alone big-spending infrastructure plans of the kind supporters of the Green New Deal demand.

Nevertheless, Joe Biden is perhaps uniquely suited to what seems like a difficult set of legislative challenges. With decades of experience as a senator and eight years as Vice President, Biden is better placed than a more partisan figure to find compromise and pass a reform package, even if it is much diluted. The stakes are high, further inertia in Washington will frustrate the Democratic voters who put their faith in Biden and turned out in record numbers, while confirming to Trump Republicans that the political system is broken and further, stronger doses of populist medicine are therefore needed.

November 19th, 2020|2020 What Happened?, Elections and party politics across the US, Peter Finn, Robert Ledger|0 Comments
Previous post Next post