Last January, against the expectations of many, the Democratic Party won two US Senate run-off elections in Georgia, giving them effective control of the Senate. Lauren C. Bell writes that while Democratic control of the Senate has allowed President Joe Biden to advance some aspects of his agenda, such as COVID-19 relief, procedural limitations mean that more ambitious legislation is likely to be stymied by Senate Republicans.

The 2020 presidential election wasn’t the only consequential vote last November. Thirty-five seats in the 100-member US Senate were also up for grabs. In most instances, the outcomes of these contests were assured, but several contests, including those in Arizona, Michigan, and the two seats in Georgia, came down to the wire. After the Democrats failed to take seats from vulnerable incumbents in Maine and North Carolina, the January run-off Senate elections in Georgia took on particular importance, as Democrats needed to win both seats—then occupied by Republicans—in order to have any hope of gaining control of the Senate.

The US Constitution requires that senators, who serve six-year terms, be divided into three classes for the purpose of staggering elections by two-year intervals. Thus, it’s unusual for two seats in the same state to be up for election at the same time. In 2020, however, both of Georgia’s Senate seats were up for election. Incumbent senator David Perdue sought reelection to the seat he won six years earlier, while senator Kelly Loeffler defended the seat she was appointed to by Georgia’s governor in December 2019 following the resignation of former senator Johnny Isakson for health reasons. Under Georgia law, because Isakson’s resignation occurred more than 27 months before the end of his term, Loeffler had to stand for election to the remainder of the unexpired term.

To complicate matters further, Georgia election law further specifies that when no candidate receives a majority of votes cast in an election for federal office, a run-off election between the two top vote getters must be held nine weeks following the original contest. In the November general election, Purdue missed the 50 percent-plus-one-vote threshold by just three-tenths of one-percent (garnering 49.7 percent of the vote), while Loeffler came in second behind Raphael Warnock, who managed only 32.9 percent of the vote in a field of 20 candidates.

Thus, with Republicans having secured 50 seats to the Democrats’ 48 seats in November, all eyes were on Georgia during the nine-week run-off campaign. Run-off elections are typically lower-turnout events that have often benefitted Republicans.  The Georgia run-off defied these expectations. Exit poll and other evidence suggests that enthusiastic turnout by Black voters and depressed Republican turnout resulted in exceedingly narrow victories on January 5 for Democrats Jon Ossoff, who succeeded Purdue, and Raphael Warnock, who emerged victorious over Loeffler.

When the election dust finally settled, the Democrats had captured just enough seats to move the Senate from a 53-47 Republican advantage to a 50-50 partisan split. These Democratic seat totals in the 116th and 117th congresses include the two independents, Bernie Sanders of Vermont and Angus King of Maine, who caucus with the Democrats. With Joe Biden and Kamala Harris winning election to the presidency and vice-presidency, respectively, the Democrats effectively regained control of the Senate after six years of Republican leadership.

Nevertheless, casting tie-breaking votes is rare for vice-presidents, and the even split within the chamber required a carefully-negotiated power-sharing relationship between Republicans and Democrats to provide the contours of the chamber’s daily work. The 117th Congress’ power-sharing agreement closely hews to the one negotiated in 2001 when then-Senator Jim Jeffords (Vermont) left the Republican party to caucus with the Democrats, causing the chamber to be evenly divided between the two parties. 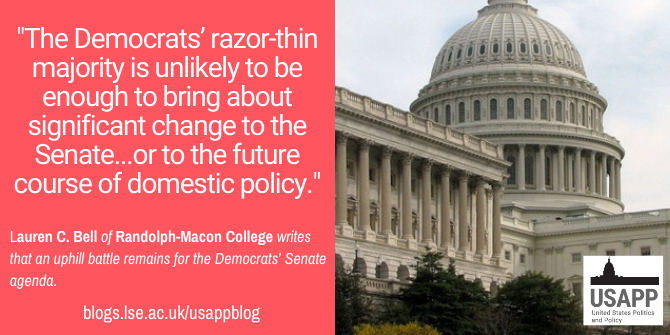 Under the Senate’s current power-sharing arrangement, seats on all Senate committees are equally divided between the two major parties, but in the event that there is a tie vote on a matter of subcommittee business, the chair of the full committee has the authority to discharge the matter to the full committee. In addition, while under the chamber’s usual rules measures do not advance if there is a tie vote, under the power-sharing agreement if there is a tie vote in a full committee, either the Senate Majority Leader or Senate Minority Leader can move to discharge the item of pending business; after a short period of debate, a simple majority vote will determine whether the business advances to the floor. This power-sharing arrangement will remain in place unless either party captures outright a majority of regular Senate seats (through death, resignation, or party switching, for example).

Even with the power-sharing agreement in place in the Senate, the unprecedented twin victories for Democrats in Georgia meant that President Biden began his first term with his party in control over both branches of Congress. This has proved to be important for a few reasons.

First, despite worried post-election predictions to the contrary, Biden’s cabinet nominations were confirmed by the Senate expeditiously and with little dissent once the 2020 election results were certified.

Second, unified control gives Democrats an edge when it comes to setting the policymaking agenda. Already, with the Senate’s participation and agreement, Congress has passed and President Biden has signed several pieces of domestic policy legislation: S. 937, the COVID-19 Hate Crimes Act, H.R. 1868, a bill to prevent automatic spending cuts for Medicaid, among other things, H.R. 1799, which extended the Paycheck Protection Program aimed at supporting small business during the COVID-19 pandemic, and H.R. 1319, the American Rescue Plan Act of 2021, which expanded a number of supports to help individuals, families, schools, small businesses, and state and local governments recover from the COVID-19 pandemic. The American Rescue Plan included several provisions aimed at reducing child poverty, supporting families with children, and promoting state-level capital projects, such as the expansion of broadband network. All of these are policy areas important to Democrats generally, and to President Biden specifically.

To be sure, the first few months of the 117th Congress have not been as contentious as they likely would have had Democrats not effectively gained control of the Senate. But Biden’s more ambitious plans will almost certainly continue to be thwarted by procedural limitations in the Senate—most notably the Senate filibuster. And with West Virginia Democratic Senator Joe Manchin stating publicly and unequivocally that he will not vote to weaken or eliminate the obstructive device, the Democrats lack even the 50 votes they’d need to change the rules through machinations such as the one used by former Senate Majority Leader Harry Reid (D-NV) in 2013, when the Democrats reduced the threshold to invoke cloture on nominations from 60 votes to 50.

It is unclear whether the Democrats’ ambitious voting rights legislation—a high priority for the Democratic Party—or any other aspects of President Biden’s domestic policy agenda will be able to overcome inevitable Republican obstruction. Absent additional Republicans willing to break with their own party ranks, the Democrats’ razor-thin majority is unlikely to be enough to bring about significant change to the Senate institution or to the future course of domestic policy.

June 11th, 2021|2020 What Happened?, Elections and party politics across the US, Lauren Bell|0 Comments
Previous post Next post