Relations between the US and China have been heated under the Trump administration. But will Biden usher in a radically different approach to dealing with Beijing? Thomas Gift suggests that, in some key respects, it’s unlikely. Although Biden’s policies may grant more predictability to global markets, his administration will inherit challenges that will make it difficult to radically shift course.

How will Biden differ from Trump in countering China’s global clout?

The key difference is that Biden won’t take a “go-it-alone” approach. Trump has mostly made the battle with Beijing a one-on-one contest, but Biden has promised to ally with other global partners, including Europe, to garner more leverage in pushing back against China. His logic is that there’s strength in numbers, and—even with the economic power that comes from making up a quarter of the world’s GDP—the US will have a better hand by bringing other national powers along with it. This aligns with Biden’s broader pledge to restore relations with allies and to leverage those partnerships to collaborate on areas of mutual agreement.

Will Biden end the trade war?

It seems doubtful that Biden will significantly dial back tariffs against China, at least in the short-term. What happens with the trade war in the medium- to long-term will likely depend critically on the actions of Beijing. A major point of departure from Trump, however, is that Biden almost certainly won’t be defined by the unpredictability of erratic tariff increases and decreases. In short, we can expect less economic brinkmanship. This should be welcome news to Wall Street, which has often found that the most problematic aspect of Trump’s on-again, off-again tariffs is the uncertainty of how to price their effects into financial markets.

Will tensions ease between the US government and Chinese tech firms?

Again, Biden’s approach to the Chinese tech industry might not differ too much from Trump’s. It’s doubtful that Biden would’ve been as aggressive as Trump has been, for example, in threatening to shutter companies like ByteDance or in signing a recent executive order barring US entities from investing in Chinese tech firms with military links. Still, Biden might be hesitant to reverse course, given the challenges his administration inherits. Like their Republican counterparts, many Democrats recognize that Chinese tech firms pose not only economic competition for the US, but also nontrivial data privacy and national security concerns.

Will US-China relations improve under Biden?

Best case scenario, it will take time. Right now, there’s notable agreement across the partisan aisle in Washington that the US shouldn’t considerably soften its stance toward China. That’s true not only because of accusations about China exploiting global trading rules, but also due to concerns about China’s human rights violations and military expansionism. Compared to Trump, Biden will rely on less vitriolic rhetoric, more diplomacy, and more attempts to work with China on critical issues like COVID-19 and climate change. Biden, however, has said the US should “get tough with China,” so icy relations won’t thaw quickly. 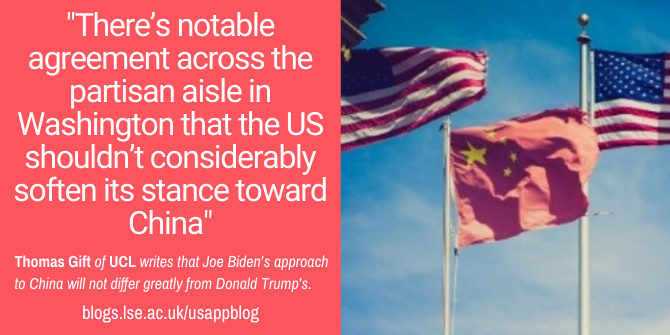 “USA and China Flags in Chinatown” by Nan Palmero is licensed under CC BY 2.0

How will Biden interact with the World Trade Organization?

Biden may be more supportive of the WTO, but again, there’s considerable consensus in D.C. on the need for institutional reform. That involves everything from dealing with how long it can take for the WTO to render decisions to concerns about judicial activism. As with other areas, the main pivot point will be in process, tone, and Biden’s eagerness to get other countries onboard with the US agenda. In many respects, the WTO could be a harbinger of how successful Biden is likely to be in building these kinds of coalitions, especially after the Trump administration’s pre-election attempts to block Ngozi Okonjo-Iweala, who would be the first woman and African head of the WTO.

It’s unclear that brokering new trade deals will be a top priority for Biden. That’s partly because he’s constrained by vocal elements of the Democratic Party that are more skeptical of trade openness. However, it’s also because there are plenty of big challenges on the domestic policy front, including dealing with COVID-19 and the stimulus, that may preoccupy Biden’s time. Biden has vowed, for example, that any new trade agreements won’t be on the table “until we’ve made major investments here at home.” Notably, that may not bode well for the UK as it eyes a trade deal across the Atlantic in the wake of Brexit.