In the wake of the Capitol Hill insurrection earlier this month, a number of large corporations have announced that they will stop sending campaign contributions to certain Republican politicians. In this Q&A, Thomas Gift explains the impact that corporate money has in Washington, why the announcement is potentially significant, and why its implications will depend on the timing and nature of how firms withhold dollars to GOP candidates.

What role does corporate money play in Washington? And why is the announcement by many large firms to withhold funds from Republican politicians attracting so much attention?

Corporate money chases political influence because of the outsized role of Washington in allocating benefits. That includes tax breaks, favorable regulatory policies, government procurement opportunities, and other high-stakes outcomes. Big firms, especially, tend to spread out their donation dollars to both Democrats and Republicans. This hedges their risks. That way, whoever wins, they’ll have supported the politicians who hold office, and they can more effectively lobby those in power.

It’s possible that the public sometimes overestimates the role of corporate money in politics. Yet just about every elected leader’s donor list in Washington includes mega-corporations, and money certainly matters. So the halting of campaign contributions by some of America’s best-known corporations—including Amazon, General Electric, AT&T, and Verizon—comes as extremely unwelcome news for the Republican Party. Many Republicans have been reluctant to turn on Trump, but money talks loudly.

What’s most striking is the sheer number of firms that have announced they’ll stop giving to certain Republican candidates. It’s a virtual “who’s who” of American blue-chip companies. Although it wouldn’t be surprising for a few executives to make their distaste for Trump known, this is on another magnitude. The big question is whether the moves constitute the start of a more substantial rethinking by firms about how they allocate campaign contributions.

Is the goal of withholding money more symbolic or substantive?

It’s both. Symbolically, a number of CEOs and boardroom executives clearly want to make a point. Polls show that most Americans are deeply disturbed by the riot on Capitol Hill, and this is one way that firms can signal what side they’re on. Substantively, though, the cutting off of campaign contributions could also have real effects on the GOP. But that depends on whether firms can credibly commit to withholding contributions for an extended period and how discriminately these decisions apply.

This could just be a short-term gambit by companies. In three or six months, when tempers cool, corporations might snap back to business as usual. Companies are profit-making enterprises, and they bankroll campaigns because it benefits them. So, given the stakes—and their financial commitments to shareholders—it’s hard to imagine that firms will, in the long run, not continue to donate to a sizable fraction of the Republican Party. 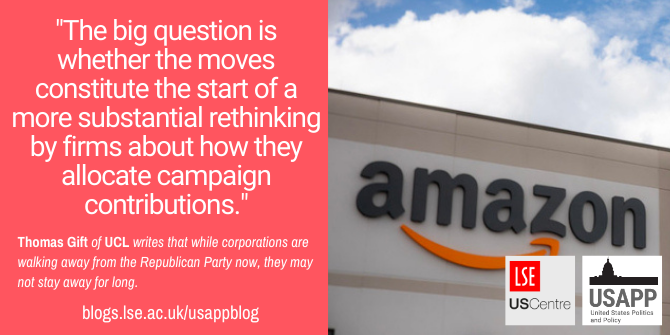 Going forward, individual corporations will also have to weigh how selectively or indiscriminately the withholding of dollars should apply. Most firms seem to only be cutting off dollars to Republicans who endorsed Trump’s baseless election-rigging claims. Yet one could also imagine firms extending that out to any Republicans who continue to support Trump generally. More broad-based threats to withhold money might have a greater effect in generating a wake-up call among GOP leaders.

What effect will the announcements have on rank-and-file voters?

The moves will have an indirect effect on voters, insofar as politicians, of course, take money from companies and leverage it to finance their campaigns. Without these funds, Republican candidates will have a harder time reaching voters and broadcasting their message. With that said, the average voter probably won’t know, for example, if Comcast or American Express supported Candidate A or refused to support candidate B. The information is publicly available, but most voters just don’t look into it.

If activists or conservative media press the issue, however, the issue might get more traction. Take what happened when Twitter banned Trump. That sparked backlash from some on the right, who complained that large businesses, Big Tech, the elites, etc., were colluding against their interests. We might see similar political pushback here. One scenario could be that Trump supporters attempt to fill the financial void that these corporations leave by donating more to candidates who back the president.

Another scenario is that Trump loyalists could boycott companies, forcing them to revisit their decisions. In fact, we saw analogous responses about a year and a half ago. That time, however, it came from progressives, who triggered high-profile boycotts of companies who’d donated to Trump. On that list were companies like Equinox and Soul Cycle, whose owner, Stephen Ross, had hosted major fundraisers for Trump. According to some reports, those boycotts had material effects, with customers choosing to take their business elsewhere.