Since the Great Financial Crisis of 2008, the US Federal Reserve and other Central Banks have kept interest rates low, with the stated purpose of promoting economic recovery. But, writes, David W. Wise, rather than boosting the real economy, these low interest rate policies have artificially inflated financial markets and driven inequality through soaring asset prices.

The job of the Federal Reserve is to take away the punch bowl just as the party gets going,

The financial markets on which a capitalist-based system depends are largely broken. For the past decade, coming out of the Great Financial Crisis, interest rates have been held close to zero by Central Banks. While this had helped spur one of the longest economic recoveries in history, the US Federal Reserve Board’s (‘The Fed’) actions were focused more on saving and pumping up financial markets, rather than on boosting the real economy.

This past year, following a low point in March, stocks soared each week when Depression era job losses were announced as the devastation of Main Street presaged another round of monetary stimulus for Wall Street. Since 1980 the Federal Funds rate (the target interest rate for banks to lend to one another set by the Fed) has been in steady decline — a period of stagnant wages and anemic growth.

Near-zero interest rates have resulted in mispricing of investment decisions and thus misallocation of capital. This misallocation has resulted in lower growth. It has provided life support for so called zombie companies and encouraged an ever upward spiral of debt. Over the past twenty years the ratio of public debt to GDP has more than doubled exceeding the level attained during the Second World War. Corporate debt as a percentage of GDP has also climbed to record levels. 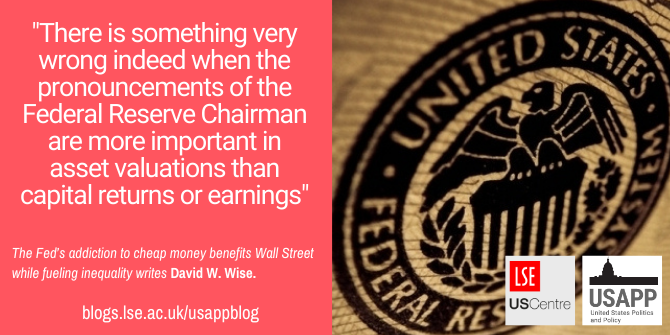 “United States Federal Reserve System” by Kurtis Garbutt is licensed under CC BY 2.0.

And what has been the driving force in corporate indebtedness? Investment? Net domestic investment was lower in 2020 than in 2006. No, much of this debt was used to buy back shares from existing shareholders. JP Morgan recently noted that since 2004 there has been a decline in the “net equity supply” of shares in the US equity markets due to buybacks of shares and M&A.

Easy money has caused asset prices to soar. The asset bubble, which accrues primarily to the benefit of the affluent who hold the lion’s share of financial assets, has been a, if not the, major contributor to rising inequality. Wealth, societal wealth, is not created by debt or the digital printing press.

While it is proper that governments make every effort to rescue an economy in peril, one should criticize them when their failures to exercise prudential oversight or other actions encouraged the behavior that helped cause that crisis such as fortifying the punch bowl rather than its removal. Moral hazard – where banks and financial institutions take greater risks in the knowledge that they will be bailed out – is the kindling of financial conflagration. Shareholders and bondholders of the institutions that ignited the 2008 crisis have passed the bill along to the taxpayers.

That same dynamic is playing out again. Last spring the Fed stepped in to provide support for a range of instruments including even junk bonds, so is it any surprise that the issuance of such high-risk debt was 71 percent higher than the prior year or that the spread between investment grade and high-risk debt is at the lowest level in history?

And now there are even some who argue that interest rates be kept low to service the mountain of debt, a process that would only ensure that the mountain becomes larger still. Companies that manage their balance sheets prudently are, in effect, punished inverse to the moral of the fable of the Three Little Pigs.

There is something very wrong indeed when the pronouncements of the Federal Reserve Chairman are more important in asset valuations than capital returns or earnings. Over the last ten years as interest rates plummeted and were held low, the S&P 500 stock index has increased twice as fast as the growth of earnings or the GDP.

The Fed should set short term interest rates, not the S&P. The Fed exerts influence on the market, but the Fed should not become the market. The Modern Monetary Theory and central planning that many were concerned about coming through the back door in the recent election have already been lounging in the parlor. The addiction to cheap money will lead either the US replicating the economic stagnation of Japan or a catastrophic return of gravity in due time – or both. The only thing impermanent in the “Greenspan put” – the idea that the Fed will be a backstop for the stock market – is the name of whoever happens to be the Fed Chair at that time.

David W. Wise
David W. Wise is a retired businessman from Baltimore and a graduate of The Fletcher School of Law and Diplomacy, Tufts University.