The past month has seen an armed insurrection at the US Capitol partly organised via the social app Parler, and an attack on hedge funds by individual traders fuelled by the discussion forum website Reddit. Scott Timcke writes that both these events were expressions of anti-system politics – the rejection of how politics and the economy are run in rich countries like the US.

Only one month old, 2021 has seen two events in which apps and platforms played a major role in United States politics. The first was the insurrection at the Capitol Building on January 6th and the second centered on an online collective of retail stock traders facing off against Wall Street hedge funds since last week. But it would be a mistake to think that the source of these events resides in the apps and platforms themselves. Rather they are expressions of anti-system politics – the shared rejection by those on the left and right of the established political and economic orthodoxy which govern rich democracies –  playing out in digital mediums.

Apps as vehicles for anti-system politics

Let’s begin with Parler, one of the main apps used to organize the ‘Save America’ insurrection. Due to dissatisfaction with content policies on platforms like Reddit, especially in the wake of the quarantine then the banning of r/The_Donald (a subreddit and key forum in forming and sustaining the MAGA movement) the far right explored new platforms before decamping to Parler in mid-2020. The app received endorsements from notable Republicans like Senator Ted Cruz (TX). Due to its stated commitment to free speech absolutism and desire to circumvent so-called ‘Big Tech censorship’ the app was conducive to QAnon theorizing, hate speech and fantasies of a 2nd American Civil War. It subsequently became a venue of planning and hyping up the insurrection. Following the assertion of power against the insurrectionists, Parler faced social sanction and was removed from Amazon Web Services, Google Play and the Apple App Store, significantly curtailing its operation and far right community organizing.

The next incident came two weeks later. Angry retail traders using social trading platforms bet up stocks that were shorted, GameStop among them. A 1,700 percent increase of that company’s share price caused agitation for Wall Street hedge funds like Melvin Capital Management as they faced a significant ‘short squeeze’ and the prospect of selling other assets to cover expected losses. Estimates are that around 5000 firms lost approximately $70 billion. As the losses accumulated so the business media called for the Securities and Exchange Commission (SEC) to intervene to protect the integrity of the market while social trading platforms like TD Ameritrade and Robinhood stopped buy orders on specific stocks like GameStop citing prudent risk management practices. Financiers sought, as Brown University political economist Mark Blyth commented, to “change the rules of engagement…in the name of protecting free markets.” Arguing that virality on social media is making short squeezes “more violent” former Goldman Sachs CFO Marty Chavez blamed the platforms themselves for “maximizing user engagement” to “[sell] the aggregate user attention.” Seemingly the fault is that retail traders should not have been given these technological affordances to compete with hedge funds.

One emerging response to these two events is a call for regulating these platforms to permit ongoing monitoring and surveillance to detect co-ordinated manipulation against the state and the market. For example, the Biden Administration has been petitioned to pass domestic terror legislation specifically to tackle white supremacist extremism. Senator Elizabeth Warren is similarly pushing the SEC to identify gaps in their “enforcement practices and capabilities” so that they can better “address the dramatic price fluctuations of certain shares in recent days and to ensure the integrity of our capital markets.” But the US state and its regulatory institutions are not lacking in capabilities. What they do lack is the willingness to tackle the political-economic causes. So, setting aside the mechanics of apps and platforms, there is value in looking at anti-system politics in the digital realm.

Anti-system politics of the left and right

The LSE’s Jonathan Hopkin argues that anti-system politics is a response to the dissatisfactory governance in the lead up to, during, and long tail of the 2008 Great Recession. Through prioritizing asset protection over the public interest, politics became, as Columbia University sociologist Saskia Sassen so aptly put it, “a savage sorting of winners and losers.” This long ‘democratic recession’ has meant that policies reflect the preferences of the elites to such an extent that the US is best described as an oligarchy. As Hopkin writes, anti-system politics is sharpest “where inequality is highest, and where the social and economic effects of the Global Financial Crisis have been most severe” as well as where “political institutions have been least able to address [these] consequences”. 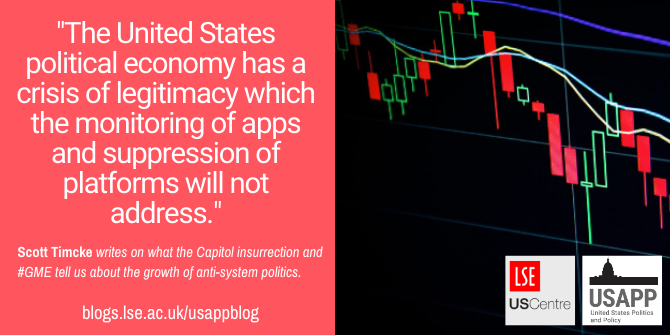 Photo by Maxim Hopman on Unsplash

There are different manifestations of anti-system politics, like a nationalist-authoritarian Right exemplified by Trumpism, and an egalitarian interventionist Left exemplified by Occupy Wall Street, the Democratic Socialists of America, and the Justice Democrats. Though they have different conceptualizations about causes and consequences, these movements are nevertheless an expression of the desire to open up the debate about democracy and the consequences caused by the ordinary operation of capitalism. Without that motivation, explanations which are built on fake news, misinformation, or a cultural backlash are incomplete at best because they arise from a political reasoning “that does not extend beyond a program for the next election, a language that does not guide the society toward long-term goals.”

Notwithstanding significant differences in political philosophy, in their respective ways anti-system politics does not view the current political-economic institutions as credible; they see and sense the gap between those that govern and those that are governed. Indeed, proponents of anti-system politics well know that Senators briefed on the looming impact of the coronavirus sold shares in companies that would likely be affected by the pandemic, while just a few months later a quarter of US households experienced food insecurity. And so, one had to work extremely hard to divorce the story of soaring wealth from mass immiseration. Consider how billionaires have gained $3.9 trillion in wealth during the global coronavirus pandemic, while workers lost $3.7 trillion. Yet this connection receives token airtime on US cable news. Like in 2008’s Great Recession, the pandemic is proving to be a massive transfer of wealth from the poor to the rich.

These problems will only become more acute as ‘long covid’ looms. As the Eurasia Group predicts, “countries will struggle to meet vaccination timelines, and the pandemic will leave a legacy of high public debt, displaced workers, and lost trust.” These conditions are ripe for anti-system politics to gain more support. If the 2008 Great Recession saw the popular traction of reactionary and revolutionary anti-system politics, then the coronavirus recession may super-charge those energies. While most of the outrage from 2008 was absorbed into electoral politics, there is no guarantee that the same will be true in the years ahead. The United States political economy has a crisis of legitimacy which the monitoring of apps and suppression of platforms will not address; the issues are more fundamental than how the public uses social media.