Once thought of as a battleground state, Florida now leans Republican in presidential elections. Kevin Fahey takes a close look at county-by-county results and trends in the 2020 election in the Sunshine State and finds that given the Republican Party’s growing appeal in rural areas, there is no further deep well of Democratic voters for Joe Biden to turnout. Winning the state in 2024 may therefore be an uphill battle for Biden, in an election which may well prove to be much closer than 2020’s.

The state of Florida has undergone a remarkable transformation in the past twenty years. From being the closest battleground in 2000 (with only 537 votes deciding the election) to the 8th-most competitive state and only one of eight states to swing towards former President Donald Trump in the 2020 election, Florida is no longer a critical battleground state for Democrats. This may present challenges for President Joseph Biden in the 2024 elections, where control of the White House may hinge on winning Florida.

President Biden has a number of structural disadvantages for his current 306-232 electoral vote lead. First, redistricting will likely mean Biden loses 5 electoral votes in 2024 if all states vote the same as they did in 2020. Second, Biden’s leads in Arizona and Georgia are small enough that if those states’ legislatures adopt newer, restrictive voting rules, he would quite possibly lose those two states, meaning his expected electoral vote victory in 2024 would be only 273 to 265. Without being able to seriously contest Florida, North Carolina, or Ohio, Biden would have to play defense and hold all of Pennsylvania, Michigan, and Wisconsin in order to retain the Presidency. Florida’s rightward shift under Trump therefore makes Biden’s path quite perilous.

Like many states, Florida appears to be polarizing along urban-rural lines; in the 2020 election, Biden won only 12 of the state’s 67 counties and still received 47.8 percent of the vote. Figure 1 below is an interactive graphic, showing the Democrats’ share of the presidential vote, county-by-county, from 2000-2020. With the exception of the Miami region, Florida’s urban centers (Jacksonville, Orlando, Tampa, Gainesville, Tallahassee, and Pensacola) have all become bluer since 2000, 2004, 2008, and even 2012. By contrast, rural areas have swung sharply toward Republicans. But the Republican trend in South Florida’s urban counties pose the largest concern for Democrats who want to win the state’s 30 or 31 electoral votes.

Annual vote swings in presidential vote shown in Figure 2 below highlight how Miami, Broward, and Palm Beach (in red) are alone among major urban counties in having swung towards Trump in both 2016 and 2020, while all other major urban counties (Brevard, Duval, Escambia, Hillsborough, Lee, Orange, Pinellas, and Polk in blue) in swinging towards Democrats. 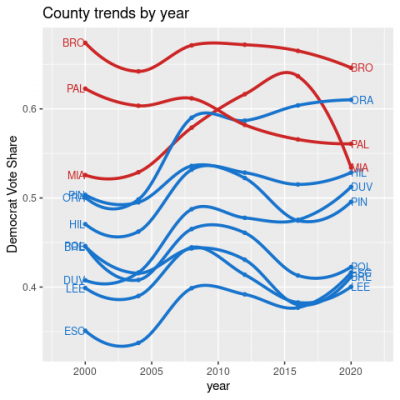 The swing towards Trump in the 2020 election is most obvious in heavily Latino Miami-Dade County. The swing in Miami-Dade made up almost half of Biden’s statewide deficit, and fewer voters there selected the Democratic ticket in 2020, despite an increase of 800,000 Democratic votes statewide. However, if you compare Biden’s performance in Miami-Dade to John Kerry’s performance in 2004 or Al Gore’s in 2000, the story appears to be one of reversion to the mean. 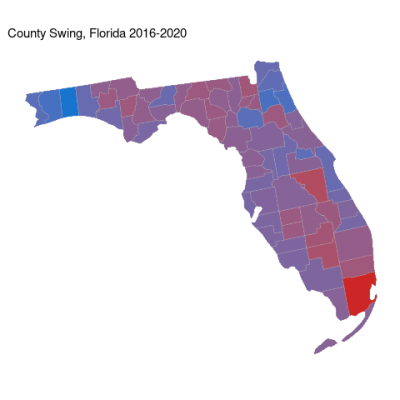 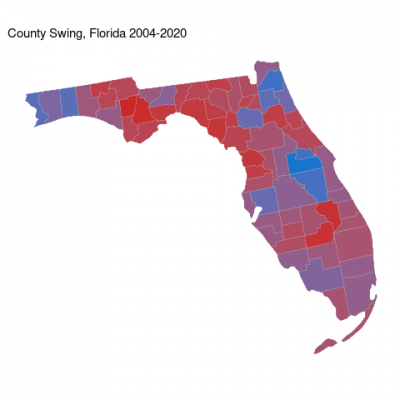 Instead, it appears that nearby Palm Beach county is becoming more Republican. Had Biden matched John Kerry’s 2004 result there, his statewide deficit would have declined by 70,000 votes. Broward County’s decline is less severe but is consistent with trends in the rest of South Florida. In both counties, these trends predate Trump, signaling that the composition of those counties will last into 2024.

As a consequence, Biden will need to improve dramatically in other parts of the state. In particular, Democrats will need to broaden their appeal beyond the major cities in order to win Florida. Biden won 51.8 percent of the vote from the fifteen-most populous counties, but (assuming all other counties’ votes remained unchanged), needed 55 percent of the vote from those counties to win the state. 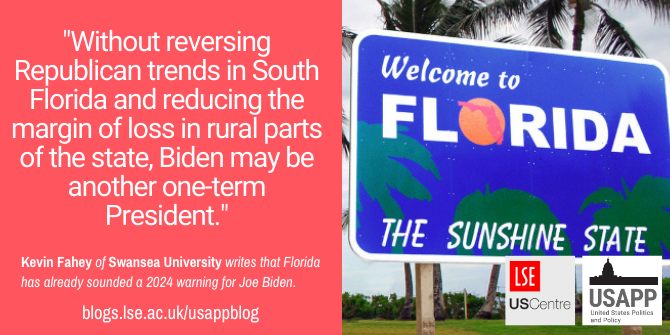 Unfortunately, it is difficult to imagine how Democrats can improve upon their 2020 performance in the state. In 22 counties, Biden’s Florida vote exceeded the number of registered Democrats in the county, and in a further 13 counties his vote exceeded 90 percent of the number of registered Democrats. While rural areas in Florida are not growing as quickly as urban areas, the growth of heavily-Republican counties such as Sumter County, and the potential to convert and turn out the remaining Dixiecrats in the state, means Republican candidates will be able to easily build on their turnout successes in 2016 and 2020. Biden has no such “deep well” of voters in Florida. 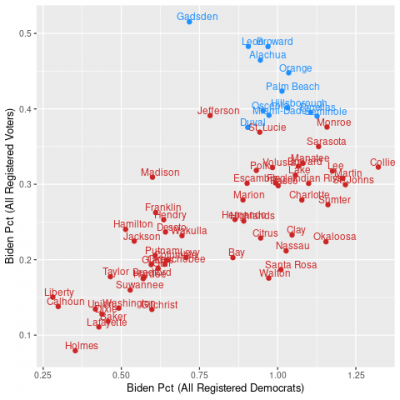 Instead, Biden may have to appeal to former Trump voters, but recent Gallup polling shows that Biden’s approval among Republicans is at 11 percent, the lowest level of opposition-party support for a new President going back to Eisenhower. It is unclear, at least to me, how Biden’s support grows. Perhaps the rebound in the economy, associated with massive stimulus plans, improves his standing with Trump voters, although a large academic literature suggests that voters evaluate economic conditions through a partisan lens.

President Biden’s current coalition – which was very similar to Hillary Clinton’s 2016 coalition – may not be enough to hold onto the White House in 2024 without substantially broadening his support in states like Florida. Yet without reversing Republican trends in South Florida and reducing the margin of loss in rural parts of the state, Biden may be another one-term President.

February 18th, 2021|2020 What Happened?, Elections and party politics across the US, Kevin Fahey|0 Comments
Previous post Next post