For more than 50 years, the National Flood Insurance Program has underwritten flood insurance for homes and small businesses in the US. Rebecca Elliott writes that the way the program addresses flood risk is set to change this coming October. This technical and political transformation will see a move from collective to individualized risk assessments potentially atomizing the politics of flood insurance and protection.

As Texas suffers from rolling blackouts linked to severe weather it’s important to remember the political and economic factors which can help or hinder those affected by natural disasters. Floods in the US are no different. The United States National Flood Insurance Program (NFIP) underwrites flood insurance for homes and small businesses across the country. This public, federal program, prices its policies in roughly the same way as it did when the program was first established in 1968. It relies on “flood insurance rate maps” that carve up the nation’s floodplains—coastal and riverine, urban and rural—into zones of high and low flood risk. Whether someone has to have a flood policy in the first place and the cost of their annual premiums is connected to those maps and to designations they share not only with their neighbors, but also with homeowners in comparable flood zones around the country.

This is all set to change on October 1, 2021. The Federal Emergency Management Agency (FEMA), which runs the NFIP, has announced a program-wide shift to what they are calling “Risk Rating 2.0”: a more granular, individualized assessment of flood risk that incorporates different types of flood risk, each specific property’s distance to a flooding source, and the cost to rebuild that particular structure.

The change comes in the face of many years of consistent criticism of the way FEMA maps and prices risk, from voices inside and outside government. This criticism that has steadily grown in volume and urgency given expectations that climate change will continue to worsen flood risks around the US. These critics have faulted FEMA for using outdated data, for taking too long to update rate maps, and for oversimplifying the kinds of hazards facing places as different as downtown Manhattan and rural Louisiana. Researchers have argued that, as a result, FEMA massively underestimates the number of people at risk of flooding—meaning tens of millions of people likely don’t know their flood risk and don’t have insurance. It turns out that mapping the nation’s flood risks, which evolve as the climate changes but also as real estate development continues, is a serious technical and financial challenge for an agency that has not always been able to rely on consistent funding and commitment from Congress.

With Risk Rating 2.0, FEMA hopes to address these issues, to close the “insurance gap,” by “leveraging industry best practices and current technology,” according to the website where the agency outlines the planned changes. FEMA promises to “deliver rates that are fair, make sense, are easier to understand and better reflect a property’s unique flood risk.”

FEMA acknowledges that Risk Rating 2.0 will “transform” the NFIP. Their account of this transformation is a technical one, a rather straightforward—though certainly ambitious—modernization of data, models, and formulas. But Risk Rating 2.0 also proposes a (so far unremarked) political transformation. As I argue in my new book, Underwater: Loss, Flood Insurance, and the Moral Economy of Climate Change in the United States, recurrent debates about how to assess and price risk under the NFIP have always had broader political and moral stakes.

These debates have involved contentious claims about the appropriate limits of individual versus collective responsibility, about the worth of places to their residents, and about the obligation of governments to protect investments in property as risks change. With a shift to more “individualized” assessment, premised on a more expansive view of flood risk that will affect not only yearly household costs but also property values, Risk Rating 2.0 is poised to reignite controversies along all these lines. If the price of insurance for many homeowners goes from a few hundred dollars a year to a few thousand, they may well have tough questions for policymakers about how those increases will affect family finances and local tax bases, and about what is being done to make them safer from the floods to come.

From shared interests to individual assessments

The politics of making these claims may take new shape. In the past, the flood maps themselves, with their broad risk zones, invited people to think of themselves as part of a group—“flood zone homeowners”—with a set of shared interests. In 2012, the last time flood insurance premiums were set to move in a more risk-based direction, this group grew into a nationwide grassroots network of homeowners called “Stop FEMA Now,” who argued that the changes would economically decimate families and communities. They eventually won redress from Congress. But in a Risk Rating 2.0 world, where even next-door neighbours may face starkly different risk assessments and insurance prices, the possibilities for building constituencies may well change. This technical adjustment not only individualizes the risk; it atomizes the politics of flood insurance and protection. 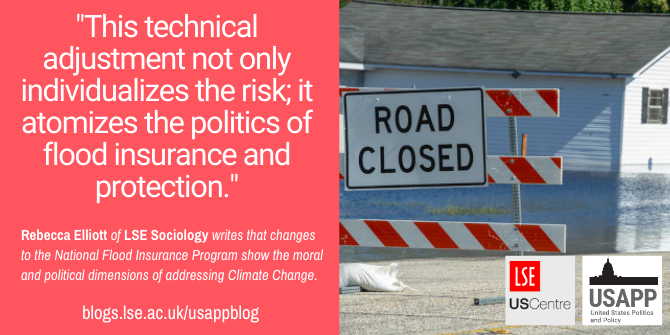 What’s more, even when couched in a language of scientific objectivity and technical accuracy, as they so often are, risk assessment and insurance rating are unavoidably morally laden tasks. This is perhaps most obvious in FEMA’s own description of Risk Rating 2.0 as a “fairer” way to price insurance. This links closely with the idea of fairness common to many private insurance institutions—“actuarial fairness”—meaning higher risk, higher premiums. I pay according to the risk I introduce into the risk pool. But the NFIP, as a public program, has also been shaped by other conceptions of fairness, which I trace in Underwater. Making sure that everyone can access coverage, even those at high risk, is another way to frame fairness in insurance rating, and this particular framing has been used both to justify longstanding subsidies and grandfathering provisions that have kept flood insurance affordable, as well as the continued provision of insurance even to those properties that have repeatedly flooded.

The idea that an individualized risk assessment is fairer also implies that one’s risk is a product of individual circumstances. In a narrow sense, this is true. A house elevated on stilts 4 feet above the height of expected floodwaters does face less risk than even a neighbouring house flat on the ground. But in a broader sense, the flood risk any individual faces is the product of collective decisions: to zone an area for residential land use, to build roads and other public infrastructure that serve the property, to maintain (or fail to maintain) protective infrastructure like levees or floodwalls, to disclose flood risk at the point of sale (laws about this are patchy across the US), and so forth. Many of these decisions long pre-date a person’s decision to buy a home in a floodplain.

The point in the end is not to say that Risk Rating 2.0 will necessarily be a “better” or “worse” way to price flood insurance. Rather, it’s to stress that the history of the NFIP shows that dealing with flood risk is never solely a technical task of finding the right data and using the best models. Political and moral debates about what is fair, valuable, and prudent have always shaped how the program has been able to use its data and models. We should be attentive to how such debates will shape the form Risk Rating 2.0 ultimately takes in October 2021 and beyond.

Rebecca Elliott – LSE Sociology
Rebecca Elliott is an Assistant Professor in the Department of Sociology at the LSE. Her research interests span economic sociology, political sociology, environmental sociology, and knowledge production and science studies. Her latest book, Underwater: Loss, Flood Insurance, and the Moral Economy of Climate Change in the United States was published in January 2021.