In Libya’s Fragmentation: Structure and Process in Violent Conflict, Wolfram Lacher offers a detailed examination of the conflict in Libya, focusing on how the transformation of social ties and the fragmentation of local politics in different communities have played a key role in shaping the country’s trajectory since the overthrow of Qadhafi in 2011. This is a valuable contribution to the literature exploring the transformative effect of violent conflict on communities and is a crucial study for political scientists and scholars seeking to understand how the political and military landscape in Libya has fragmented, writes Burak Kazim Yilmaz. 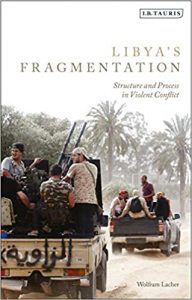 While it is nearly a decade-old conflict, the dynamics of civil war in Libya require comprehensive understanding by scholars and policymakers seeking to address the situation. Wolfram Lacher’s book, Libya’s Fragmentation: Structure and Process in Violent Conflict, explains how the predicament in Libya has gradually emerged after the toppling of Qadhafi’s regime in the 2011 revolution. Presenting a very detailed background to the conflict, with a particular focus on four different localities, Lacher mainly argues that it has been the fragmentation of local politics within different communities that has determined the country’s fate.

Before delineating the book’s main findings, the author’s nine-year field research, conducting over 300 interviews in Libyan Arabic without a translator, is worthy of praise. To collect data, Lacher travelled to different cities in Libya on several occasions between November 2011 and February 2019, even when the risks of being in and travelling between cities soared after 2014.

As the author himself indicates, in a country where sources of information are distorted, any document other than that obtained from the ground would have been unreliable as the basis for the book’s arguments. Therefore, these interviews with interlocutors – including politicians, businesspeople, members of armed groups, tribal notables and civil society activists – have great importance for the sake of any research on the Libyan civil war. Regarding localities, Lacher chose to analyse the Nafusa Mountains, Bani Walid and Misrata, which are all located in the west, and Tobruk, which is in the east. He explains the rationale behind this selection as an effort to best explore the differences in terms of communities’ varied exposure to and participation in violence in 2011 (12).

In successfully conducting research in a conflict-ridden country, this work will not only speak to scholars interested in Libya or the MENA region, but also to those who study violent conflict in general. Lacher claims that studies focusing on the role of pre-existing social structures in civil wars ‘neglect the fact that the onset of violence transforms social ties’ (62). He emphasises the uncertainties shortly before a civil war breaks out as actors experience difficulties in positioning themselves and end up demonstrating ‘collective indecision’. In such confusing environments, alignments are established by the triggering effects of contingent events. Thus, individual actions amid uncertainties may have a greater impact on galvanising people than expected.

Regarding the Libyan case, while people were hesitant to choose whether to support the revolution or to remain loyal to the Qadhafi regime in the first days of the uprising, it was minor incidents that led to the formation of armed rebels. For example, in Misrata, the protests erupted after a member of a prominent Misratan family criticised the actions of regime forces against the protesters in Benghazi. This started the chain of events that eventually forced regime forces to leave Misrata and made the city a revolutionary stronghold.

To grasp how violence transforms communities, Lacher provides insight into how these cities and regions were related to Qadhafi before the revolution occurred. Given this historical background, as one of Lacher’s interlocutors, a politician, states: ‘you should have expected Misrata to back the regime, given how much they had benefited from it. Bani Walid should have risen up, given how much it had suffered’ (74). While Misratans had been highly represented as ministers in Tripoli and its merchants worked with cronies of the regime, the regime had repressed Bani Walid harshly during the 1990s. However, with the outbreak of the civil war, Bani Walid emerged as a loyalist town, whereas Misrata became a host for staunch supporters of the revolution.

Another theme that the book focuses on extensively is the social embeddedness of armed groups. Rather than assume that armed groups represent separate entities, in Chapter Three Lacher suggests that armed groups ‘are socially embedded or insulated from their surroundings to varying degrees’ (106). This is the main driver of the process of fragmentation, the author argues. To the extent that an armed group is embedded in its community, its decision-making process is under influence of the community. This is why in a complex environment such as civil war, in which groups frequently have to make strategic choices, being deeply embedded prevents them from acting at the expense of other groups’ interests in their communities. Therefore, they cannot rise up to a position of central authority even in their cities.

In Libya, fragmentation has reached such a degree that some neighbourhoods have been harbouring different armed groups and the rifts among groups continue to widen as groups are obliged to make new choices. Lacher asserts that this tension between ‘strong local social ties and changing strategic conditions’ (145) has prolonged the war among different armed groups. In Misrata, the Nafusa Mountains and Bani Walid, communities increased their social cohesion on different occasions in victories or defeats but failed to maintain it once they began to compete over access to state institutions and resources. Innumerous groups have desired political office and other resources, all of which are scarce.

This framework also explains why Khalifa Haftar – ‘once an army officer close to Qadhafi, later his exiled opponent who after 2011 emerged as a blatantly power-hungry warlord’ (2) – was able to emerge as a strong power centre in eastern Libya. A close examination of Haftar’s rise in Tobruk demonstrates that the absence of local cohesive forces significantly contributed to his consolidation of power. Unlike other cities and regions, Tobruk did not experience a phase in which people fought for toppling the regime, as in Misrata and Zintan, or defending their city as in Bani Walid. The city was emancipated from the Qadhafi regime without much effort and this prohibited the emergence of local cohesive armed groups.

As a result, when Haftar built an army in the city, he did not face a rival also seeking power. Furthermore, Haftar received strong support from foreign countries such as Egypt and UAE: ‘no other Libyan actor benefited from support even remotely comparable in magnitude and constancy to that available to Haftar’ (185). These factors enabled Haftar to disembed himself from social networks in the east and allowed him to strengthen his authority. Lacher states that Haftar was even able to abduct or assassinate his adversaries (189-90) and eliminate the regional autonomy movement without any limitations from social networks.

In conclusion, with Libya’s Fragmentation, Wolfram Lacher has made a remarkable contribution to the literature on civil conflict and the Libyan civil war by putting forward the transformative effects of violent conflicts on communities. His work is crucial for political scientists and policymakers seeking to understand how the political and military landscape in Libya has fragmented and why the actors are still in dispute with each other.