Allowing prisoners to access college-level education reduces the risk of reoffending and can save state governments money because of the reduction in future crime. But Americans, by contrast, often oppose providing prisoners such benefits. With the recent overturning of the ban on prisoners’ receiving Pell Grants, Travis M. Johnston and Kevin H. Wozniak look at how the public reacts to prison education reform, depending on how its benefits are described. They find that when the benefits to the incarcerated and to society are noted, Americans were more likely to support providing college aid to prisoners.

The question of whether to allow prisoners to access college-level education is a prime example of the ways that politics can conflict with science. Research evidence indicates that people who take classes while incarcerated are significantly less likely to be re-arrested for a new crime. Other evidence indicates that expanding prisoners’ access to college courses could save states over $350 million per year because of prison education’s effect on reducing future crime.

Politicians, however, have historically feared that voters would punish them for appearing to give criminals a benefit that many law-abiding citizens never receive. Because of this fear, Congress banned prisoners from accessing federal student loans in the 1994 Violent Crime Control and Law Enforcement Act. This ban stayed in place for nearly thirty years until Congress restored prisoners’ Pell Grant (federal financial aid for undergraduate students) eligibility in an amendment to the “must-pass” Consolidated Appropriations Act of 2021. The question now is, will Americans react negatively to this policy change as politicians in the 1990s feared? To the contrary, our research suggests that the public will accept prison education reform, especially when policies are framed as benefitting individuals and society.

Framing the Benefits of Pell Eligibility for Prisoners

People’s support for criminal justice reform is sensitive to how the issue is framed (‘framing’ refers to the way that politicians present issues with the goal of emphasizing or minimizing certain characteristics of the topic). We employed a survey experiment, fielded as part of the 2016 Cooperative Congressional Election Study, in which we manipulated whether the proposal to restore prisoners’ Pell eligibility was described as benefiting the inmates themselves or benefiting society, more broadly. By emphasizing different benefits of the policy change, our experiment tested whether people are more supportive when primed to consider either the individualized benefits or the broader societal merits of the policy. We designed one frame, which suggested that restoring Pell eligibility would be of benefit to wider society, to mitigate potential “least eligibility” backlash among people who believe that criminals are undeserving of taxpayer-funded benefits. The other frame, by contrast, which emphasized benefits to individuals who receive Pell Grants, may be attractive to progressives and racial liberals who are concerned about the impacts of mass incarceration upon people of color.

Overall, our findings indicate many Americans are open to the idea of empowering incarcerated individuals to access college courses. On average, our survey respondents expressed ambivalence, rather than opposition, to the proposal. Respondents who were exposed to either of the experimental frames expressed about 10 percent higher support. When broken down by party, Democrats were significantly more supportive of extending financial aid to prisoners than both Independents and Republicans. While framing increased support among Independents and Republicans, Democrats were not only more supportive to start, but also more responsive to both frames. 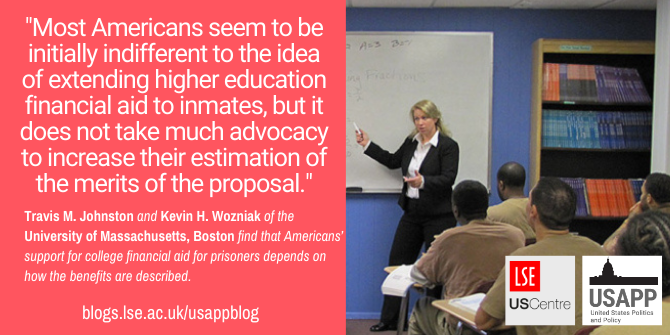 The results of our study offer both good news and not so good news for policymakers who want to expand educational benefits to prisoners in order to help reduce reoffending and improve people’s lives after they leave prison. The average response among our subjects who were not exposed to a pro-reform frame fell around the midpoint of our response scale, suggesting ambivalence toward the proposal among the mass public. Disaggregated by party and racial attitudes, only Democrats and individuals who are low in racial resentment expressed baseline support for this reform proposal. By contrast, Republicans and individuals high in racial resentment expressed baseline opposition. This finding suggests that only legislators who represent relatively liberal districts (speaking both politically and racially) have a strong electoral incentive to stand behind Pell eligibility reform.

While both the ‘individual’ and ‘society’ framings increased support for the proposal, the differences were not statistically significant for every group of respondents. On the other hand, we found no evidence of backlash to either frame. This result suggests that officeholders can justify their support for Pell eligibility reform with a short and simple explanation. Most Americans seem to be initially indifferent to the idea of extending higher education financial aid to inmates, but it does not take much advocacy to increase their estimation of the merits of the proposal. More importantly, voters exhibit malleability on the issue. The days of “least eligibility” backlash against extending rehabilitative benefits to prisoners may have passed. On the contrary, our findings suggest that legislators who represent liberal or moderate districts may gain support among their constituents if they stand behind Pell eligibility reform and explain how it benefits both former offenders themselves and society, at large, through the prevention of future crime.