After four years of “America First” policies under Donald Trump, President Biden has pledged to return the US to a position of leadership on the world stage. Charles A. Kupchan and Peter Trubowitz write that to accomplish this, Biden will first need to rebuild popular support for internationalism at home through programs to support US workers affected by trade, improving living standards, and by redoubling his administration’s commitment to social justice and political rights.

Europeans legitimately ask how long they can count on President Joe Biden’s pledge that “America is back” and again “ready to lead the world.” He is certainly off to a good start, returning the United States to international teamwork and support for democracy at home and abroad. But is Biden the new normal, or just a fleeting reprieve from Trump’s “America First”?

Biden’s main challenge is primarily one of politics, not policy. Trump still holds sway over the Republican Party, which could win back Congress in 2022, not to mention the White House in 2024. And Biden’s internationalist vision faces a deeply skeptical American public. The domestic consensus that long supported US engagement abroad has come apart in the face of mounting partisan discord and a deepening rift between urban and rural America.

Accordingly, Biden needs to rebuild broad popular support for internationalism from the ground up. Redressing the hardships facing many working Americans is essential to inoculating the country against “America first” and Trump’s illiberal politics of grievance. Improving economic conditions requires structural political reforms to ease gridlock and help ensure that US foreign policy again serves the interests of working Americans. What Biden needs is an “inside out” approach that will link imperatives at home to objectives abroad.

Biden can start reconnecting what America does abroad to the economic and social needs of working-class voters at home by opening up the making of foreign policy to new voices. For far too long, US trade policy has served the interests of big corporations at the expense of American workers. An “America first” approach to the world sells well when many Americans suffer economic insecurity and feel that they have been on the losing end of globalization.

Biden needs to bring the interests of ordinary families to the table, ensuring that factory workers, farm hands, and service workers have a strong voice in Washington’s deliberations over foreign trade. The White House should also reform the domestic programs aimed at mitigating the reduced wages and lost jobs that inevitably come with trade deals. Through training workers in new skill sets and making public investments in growth sectors, Washington can buffer communities against the displacement caused by automation and trade, spur private investment, and help reassure the electorate that open trade can be fair trade.

Biden can further shore up the domestic foundations of US statecraft by bringing strategic priorities back into alignment with political means. It is no accident that Biden is continuing Trump’s efforts to withdraw from Afghanistan and pull back from the broader Middle East. The US public long ago lost patience with the “forever wars” and the White House enjoys bipartisan support as it refocuses US statecraft on its traditional mission of promoting stability in Europe and Asia while also addressing emerging issues such as climate change and global health. 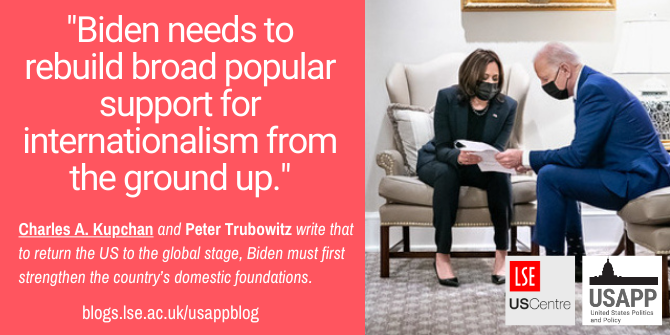 But Biden also needs to work from the bottom up to rebuild a new internationalist consensus by securing significant investments in the domestic economy that raise living standards, reduce inequality, and renew the social contract. For this task, Biden cannot afford to wait around for bipartisan support in Congress. Biden’s agenda for domestic renewal requires ambitious and expensive legislation the likes of which the United States has not seen since the New Deal. To get it through, Biden and his allies in Congress will need to overhaul the archaic filibuster rules in the US Senate.

On most legislation, the filibuster forces the Senate majority party to assemble a supermajority of 60 votes, ostensibly promoting consensus by encouraging the two parties to find common ground. But in a country beset by partisan gridlock and Republican obstructionism, this is a recipe for paralysis. Biden must therefore work with Senate Democrats to bypass the filibuster and secure much-need legislation to repair the nation’s outdated transportation infrastructure, transition from fossil fuels to renewable energy, and invest in healthcare, childcare, and education.

These measures would promote more equitable economic growth and wider civic engagement, create millions of new jobs, and help close the economic gap between red and blue America. They are essential to rebuilding an electorate and political class committed to bipartisan centrism, pluralism, and internationalism rather than the partisan extremism, nativism, and isolationism that Trump stoked.

Finally, if Biden is to return the United States to the right side of history in more than a fleeting way, he will need to ensure that the country exhibits at home the values it seeks to promote abroad. He should seek legislation guaranteeing that all Americans, including the country’s growing nonwhite citizens, have full access to voting. Most Republicans will balk, but Biden needs to remind all Americans how much damage Trump’s illiberal and nativist appeals have done to the nation’s moral authority globally. If America is to become a beacon of democracy abroad, it must redouble its commitment to social justice and political rights at home.

Biden’s challenge is not just to bring the United States back to the global stage through tactical and temporary adjustments—he must also reimagine what is politically possible. By reforming and strengthening the country’s institutions and making its domestic and foreign policies more economically inclusive, Biden can “build back better,” as he puts it, in a way that outlasts his presidency and restores the nation’s common cause behind a steady and purposeful brand of American internationalism.

Charles A. Kupchan – Georgetown University
Charles Kupchan, a member of the National Security Council under President Bill Clinton and President Barack Obama, is Professor of International Affairs at Georgetown University, Senior Fellow at the Council on Foreign Relations, and the author of Isolationism: A History of America’s Efforts to Shield Itself from the World.