The 19th century French political thinker, Alexis de Tocqueville, observed that in America, motivation almost universally came from self-interest understood in a new way, rather than from virtue, which was often the case in European aristocracies. Jeffrey K. Tulis writes that the COVID-19 pandemic has seen deviations from this tendency, with a rise in both brute selfish and virtuous behavior. He attributes this mutation of American “self-interest rightly understood” to the decay of democracy, and the rise of white supremacy and anti-democratic sentiments.

The French political philosopher Alexis de Tocqueville chose America for his great study of democracy for two reasons. He thought that the origins of the United States made America the site most amenable to understanding democracy — its inherent tendencies, flaws and promises. America was a kind of natural experiment because one could have some confidence that one could see the trajectory of democracy itself, free from confounding facts of a long feudal history. And he also thought Americans had already discerned, on their own, some of the troubling tendencies of democracy and had invented mitigations to pre-empt or forestall the most likely pathologies. America was a natural experiment and, at the same time, a fructifying model.

The democratic pathologies that worried Tocqueville included: excessive materialism, atomistic individualism, majority tyranny, and restlessness and self-dissatisfaction due to the evacuation of the spiritual dimension of human being.  Among the mitigations Americans had discovered were three that might seem strange to modern ears – lawyers, religion and “the superiority of their women.”

Self-interest as the American surrogate for aristocratic virtue

The one that most interests me, however, and serves as the prompt for this essay is Tocqueville’s observation that Americans developed and propagated a surrogate for aristocratic virtue – the doctrine of self-interest rightly understood. Americans had found a way to induce the behavior and effects of aristocratic virtue – without virtue.

“In the United States people rarely say that virtue is beautiful. They maintain that it is useful and give proof of this daily. American moralists do not hold that a man should sacrifice himself for this fellow man because it is a great thing to do; they boldly assert, rather, that such sacrifices are as necessary to the man who makes them as to the man who profits from them.”

“They do not deny, therefore, that each man may pursue his own self-interest, they do their utmost to prove that it is in every man’s interest to behave honorably.” A concrete example of this idea would be the proposition that honesty is the best policy. A businessperson seeks a reputation for honesty, not because it is good, that one should adhere it because it is just plain right. Nor would nearly any American understand the proposition that one should be honest because it was beautiful. Instead, one does the right thing because it is useful, even necessary, for sustaining and growing a business.

Tocqueville points out that this idea is not new to America. The great moralist Montaigne had recommended this surrogate for virtue long before Americans came to embrace it.  What was new to America, Tocqueville said, was its near universal acceptance in American political culture. “It crops up in everything Americans say. It is no less common to hear it in the mouth of the poor man than in the mouth of the rich.”

Americans not only act in this version of self-interest, they know that they do and they brag that they do. When Tocqueville encountered people who simply displayed virtue – who did the right thing without any evident personal benefit, and he praised them for acting in this way, they would deny that they were virtuous. “They would rather do honor to their philosophy than to themselves.”

Virtue and self-interest during pandemic times

One can certainly find much evidence for the idea of self-interest rightly understood today, during the pandemic. President Biden recently urged young people to get vaccinated because it will enable them to do more activities, indoors and out, for example. Much of the CDC rhetoric advancing its guidelines reflects the self-interest properly understood idea.

At my university, which is a vaccine hub for the state, volunteers were recruited from among our students and younger faculty with the promise of vaccination for themselves, justified as medical providers since they were not eligible on the basis of age or medical condition. And as Tocqueville observed, many experienced the pleasure of acting for the common good and said so, though prompted by the motivation to advance their self-interest. They received a taste of virtue acting out of self-interest. 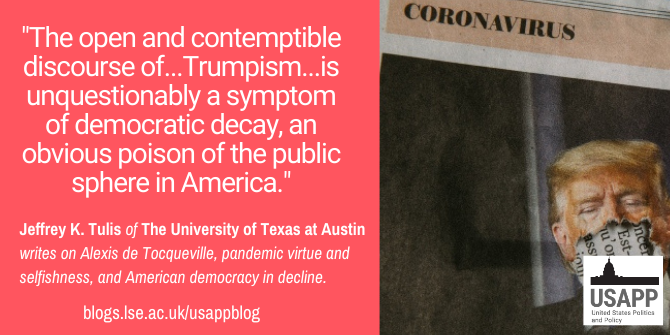 Photo by Charles Deluvio on Unsplash

But to my great surprise, the pandemic has also been the occasion for remarkable instances of virtue pure and simple – the extraordinary quality more commonly found in aristocracies and deemed beautiful by Tocqueville.

An example that I found striking occurred throughout the nation during the months of February and March when there was considerably more demand for the COVID vaccine than there was supply. Appointments to receive this medicinal liquid gold were not only few and far between – but access required computer literacy, and often computer savvy, beyond the abilities of many in the older demographic most needing the vaccine. In that moment, countless vaccine “angels” appeared throughout the country – individuals eager to use their computer skills to assist others, especially seniors, in getting appointments for the vaccine.

In Austin, Texas, where I live, there are dozens of these vaccine angels. They have established websites, developed and shared computer bots with fellow angels to be used to help schedule appointments for complete strangers. They answer queries all day and night. They arrange for transportation or seek out mobile services to bring the vaccine to the disabled. Unlike the virtuous souls that Tocqueville encountered during his travel to America, these angels respond: “you are welcome” for the thanks and praise they regularly receive. They do not deny that they are good and doing good, even if they would not boast that they do so. They display true devotion to the common good and to using their talent to assist others in need.

To be sure, alongside America’s vaccine angels are also scores of individuals who sought to game the system when supplies were precious – for example by lying about their underlying medical conditions in order to jump the line for vaccine distribution.  In a widely shared news video, two young women were caught disguised as old women in order to obtain the vaccine.

What accounts for a shift from a nineteenth century political culture in which self-interest rightly understood was pervasive to ours in which it remains prevalent, even characteristic behavior, but alongside of it are significant examples of crude selfishness, on the one hand, and virtue in the service of the common good on the other?

My speculation, following Tocqueville’s mode of thinking, is that these are symptoms of American democracy in decline and in decay.

That self-interest rightly understood is still characteristic of the moral dimension of American political culture shows it is a democracy, still.  The instances of crude selfishness and individualism illustrate the kinds of pathologies Tocqueville worried were endemic to democracy. He saw it, and attendant phenomena like the instinctive distrust or critique of experts, as likely aspects to be countered precisely because they were to be expected.

Vaccine angels, the presence of something like virtue in its traditional sense, is interesting because it is so unexpected. Perhaps the reason for it is unexpected as well. Tocqueville thought democracy to be a property of our era, not as traditional political theory taught, one regime type to be chosen over others. In his telling, the equality of conditions – the idea that any form of ascriptive hierarchy was illegitimate – set in motion a democratic era so powerful that it seemed to be a providential fact. In his telling, there was no possibility of going back to any form of traditional aristocracy. If something like aristocracy were to emerge in American democracy, he speculated, it would be a form of plutocracy or rule by powerful corporations. Although he saw the terrible toll slavery and Native American removal would take on the development of America – he did not see that some version of inequality of condition was inherent in American political development.

As Tocqueville feared, we do see serious problems of material inequality in America today and the prospect of something like plutocracy.  But we also see something Tocqueville did not anticipate – open commitments to white supremacy and other anti-democratic sentiments.

In his pathbreaking article, “Beyond Tocqueville, Myrdal and Hartz: The Multiple Traditions in America,” in the American Political Science Review in 1993 and his later book Civic Ideals, Rogers Smith showed the long persistence of an ascriptive tradition – a hierarchy of better and worse citizens inconsistent with the liberal commitment to equality. While long present In American political development, theories of American exceptionalism and of liberal hegemony reflected the fact that equality of conditions was indeed the linchpin of acceptable political discourse for much of American political history. The regulative ideal of equality dominated the American creed even as practice departed from it. Indeed, there was a significant gap between democratic discourse and practice at the time Tocqueville wrote.

American citizens’ reluctance to credit their own virtues reflected the deeper yearning to embrace a common commitment to equality – a commitment to the idea that no person was better than another.

The open and contemptible discourse of Donald Trump and Trumpism generally – a rhetoric that often asserts some people are inherently beneath others –  is unquestionably a symptom of democratic decay, an obvious poison of the public sphere in America.

But perhaps an ironic result of the resurrection of ascriptive hierarchy has also been to summon and license citizens who have extraordinary virtue — to use it, to show it, and to be proud of it.