President Biden and his administration have few agreements on policy with his predecessor, Donald Trump, other than on China. Richard Johnson writes that Biden has recognised that the US will be in strategic competition with China in the long term, and that some of his policy measures have put the US at odds with the European Union, which is being drawn more closely to China. But without further domestic investment in areas like infrastructure, he writes, China may soon pull ahead of the US economically and in global power.

As the Chinese Communist Party celebrates its one hundredth anniversary, the mood among China watchers in the United States is markedly less celebratory. For all of the ways in which Joe Biden is different from Trump, the two presidents share a fundamentally similar outlook on US-China relations, and the prognosis is not encouraging.

The COVID-19 pandemic has exposed the vulnerabilities of all economies, yet it did not fundamentally destabilise the basic competitive dynamic of recent international politics. The US’s biggest challenge, at least on the international stage, both before and after the pandemic, appears to be the rise of China. On this, both Donald Trump and Joe Biden are in agreement. Biden’s Secretary of State Anthony Blinken paid a rare compliment to the previous administration when he said, ‘I think in fairness to President Trump he was right to take a tougher approach to China. That was the right thing to do’. This was no slip of the tongue. Blinken has said ‘Trump was right’ on China multiple times in the past few months.

This surprising continuity with Trump-era foreign policy is echoed around the administration. On his first day in office, Joe Biden appointed Kurt Campbell to the National Security Council, with special responsibility for Asia policy. Campbell is a ‘hawk’, who has declared that ‘engagement’ with China ‘has come to an end… The dominant paradigm is going to be competition’. Joe Biden himself avowed, ‘We must prepare together for long-term strategic competition with China’.

This is an important shift in US foreign policy, initiated by Donald Trump. Twenty years ago, Bill Clinton predicted (in hindsight, wrongly) that China’s economic integration in global capitalism would diminish the likelihood of conflict with the United States and spur internal democratic reforms. Clinton said in 2000, ‘Bringing China into the World Trade Organization on the terms we have negotiated will advance all these goals. It will open a growing market to American workers, farmers, and businesses. And more than any other step we can take right now, it will encourage China to choose reform, openness, and integration with the world’.

Clinton’s prediction has not been borne out. As China has grown richer, it has not become more democratic nor more supportive of US strategic security interests. This is consistent with the academic research that shows that increased economic and institutional contact helped to sustain and prop-up communist regimes in eastern Europe during the Cold War rather than undermine them. 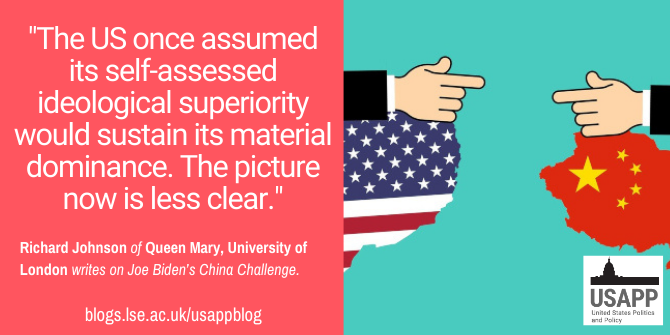 Image by mohamed Hassan from Pixabay

This puts Biden somewhat at odds with the European Union, whose member states have found themselves increasingly drawn into China’s orbit. Germany has been a major driving force for a China-EU trade deal. While human rights advocates looked askance, Angela Merkel urged for the deal not to be abandoned. Armin Laschet, the leader of Merkel’s party who is poised to succeed her as Chancellor, seems equally committed to cooperation over competition, asking in a recent interview: ‘The question is — if we’re talking about restraining China, will that lead to a new conflict? Do we need a new adversary?’.

The posture in the United States is very different. On 3 June, Joe Biden signed Executive Order 14032 which extends Trump-era sanctions against Chinese firms. The directive spoke of ‘the threat posed by the military-industrial complex of the People’s Republic of China’. In Congress, bipartisan action is being taken to square off against China. In a 68-32 vote, the US Senate recently approved a $110 billion spending package for 5 years’ worth of technological research. The spending package was seen as a deliberate response to the Chinese government’s proactive investment in its own tech and R&D sectors. Given how difficult it is to pass anything through Congress, let alone large spending bills, this was a remarkable achievement, and it speaks to the gravity of the picture as understood by leading US policymakers.

Bipartisan action is being taken against China’s human rights record as well. The Senate Foreign Relations Committee last week passed the Uyghur Forced Labor Prevention Act, which will ban exports from the Xinjiang region. In the US Senate, New Jersey Democrat Bob Menendez and Florida Republican Marco Rubio have teamed up to co-sponsor the Hong Kong Safe Harbor Act, which will expedite the asylum process for refugees from Hong Kong to the United States.

These rare displays of bipartisan action may be false comfort, however. The Chinese government is convinced that the US is experiencing irreversible, structural decline. The US once assumed its self-assessed ideological superiority would sustain its material dominance. The picture now is less clear. China is likely to become the world’s biggest economy this decade. Its government has invested billions more dollars than the US in infrastructure, education, and energy. China has been more proactive in trade and in some forms of international development. President Biden gloomily admitted the scale of the challenge after is first presidential phone call with Chinese president Xi Jinping: ‘If we don’t get moving [on infrastructure], they are going to eat our lunch’.