Today marks one year since the storming of the US Capitol on January 6, 2021. In this Q&A, Thomas Gift examines the consequences of one of the most momentous days in American politics in the last generation.

Broadly speaking, how has America changed since January 6th, 2021?

If anything, I’d argue that polarization has worsened in America and that the threat of far-right extremism has grown. A new poll from the Washington Post found that 40 percent of Republicans now think that violence against the government is justifiable. Recent data from Axios revealed that only 55 percent of Americans accept Joe Biden’s election win, which is down from 58 percent a year ago. Plenty of reports indicate the resilience of far-right domestic terror groups in evolving and adapting to America’s political landscape. There’s a misconception that having Donald Trump in the White House is necessary for emboldening the far right. The reality is that—even if Trump initially radicalized the most fringe elements of the Republican base—that energy now has a self-perpetuating momentum. Remarkably, the most extreme parts of the GOP base even think Trump hasn’t been aggressive enough in pushing “the Big Lie,” in defending groups like the Proud Boys, or in peddling QAnon conspiracy theories.

How do Americans view the Capitol storming now?

Most Americans, and even most Republicans, disapprove of the Capitol insurrection. That’s important to emphasize. At the same time, the proportion of the GOP electorate that supports the violence on January 6th isn’t small—according to a just-released CBS poll, it’s about a quarter of all Republicans. One way to think about attitudes is as concentric circles. At the center are the extremists — the rioters who physically rammed their way through security at the Capitol building last January. Outside that is a larger fraction of citizens—the true believers who continue to think that the 2020 election was rigged and who broadly endorse the January 6th insurrection. Some even subscribe to the “false flag” conspiracy theory that the insurrection was fomented by Democrats to make Trump supporters look bad. Finally, there’s an even broader group that won’t endorse January 6th but are content to ignore or not condemn it. Altogether, this adds up to tens of millions of voters.

Could an event like the one we saw on January 6th happen again?

Beyond just the potential for violence, the US could absolutely be careening toward an election where the outcome is disputed. That could devolve into chaos that’s even more severe than what the country experienced in 2020. Imagine, for example, a Trump-Biden rematch in 2024. The election is close, and the outcome comes down to one or two states where there’s a recount and litigation. If Biden is declared the winner, are Republican voters going to accept that result after many of them already perceive that the 2020 election was stolen from them? Clearly the answer is no, and there’s zero chance again that Trump would concede. But even imagine it turned out differently—that Trump is announced the winner. Will Democrats accept the legitimacy of that outcome? The answer could also be possibly not. Remember, for example, after Trump’s victory in 2016, Hillary Clinton was asked whether she thought Trump was indisputably the rightful winner, and she refused to categorically say yes. 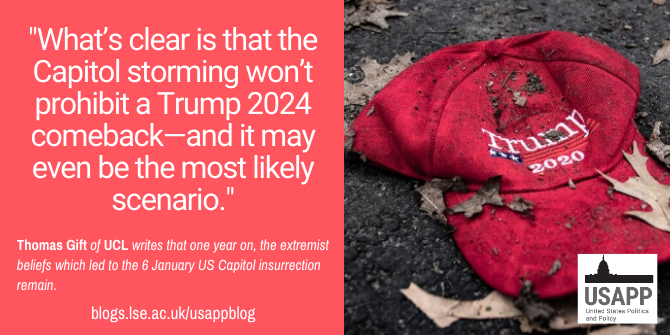 What are the political implications of January 6th for Trump’s chances for a 2024 comeback?

American voters tend to have a short memory, and for many, January 6th is already fading into the background. Currently, a House Select Committee is investigating Trump’s role in the events. But regardless of what the inquiry finds, it probably won’t move public opinion much. Most Americans know how they feel about January 6th, and new information won’t change their minds. What’s clear is that the Capitol storming won’t prohibit a Trump 2024 comeback—and it may even be the most likely scenario. Joe Biden’s approvals have fallen considerably in recent months. At the same time, polling shows that most rank-and-file Republicans hope Trump runs again. It’s hard to imagine any scenario in which, if Trump wants the GOP nomination, he won’t get it. Everything we see from Trump also suggests that he’s gearing up for a return. He’s issuing press releases, holding rallies, and generally keeping himself in the news. But even if Trump doesn’t run, it’s almost certain that he will try to play kingmaker in the election.