This morning we woke up to a new era in world politics. For the first time since World War II, two European nations are in a conventional war that is likely to affect not only European security, but also great power politics between the US, Russia, and China. Professor Peter Trubowitz writes that over the next 48 to 72 hours, the focus will be on what the West does in response to the Russian invasion, and on how the military situation unfolds in Ukraine. The stakes are high all around.

How will Biden and NATO respond to Russian military action?

I think we are likely to see three things in the coming days: tougher Western economic sanctions; calls for increased deployments of NATO battle groups to the Baltic states; and increased domestic pressure in the US and elsewhere to supply the Ukrainians with advanced weapons.

The purpose of the sanctions, which are likely to target many Russian banks and include export restrictions on advanced technology to Russia, will be to try to raise the costs of aggression to Putin and his domestic political allies. Similar sanctions could be imposed on Belarus for allowing itself to be used as a staging ground and if news reports are correct, participating in the invasion.

Potentially deploying additional troops to the Baltic states would be a way to reassure the Baltic countries that their NATO allies have their back, and to deter any possible territorial designs Putin might be entertaining beyond Ukraine.

Supplying additional weapons to the Ukrainians would let Putin know that while the West is not willing to intervene militarily to defend Kyiv, it will do what it can to make Russia pay a price in blood and treasure for its action in Ukraine.

How much of an impact any or all of this would have on Putin is unclear. Presumably, Putin has factored much of this into his decision to invade Ukraine. Of course, he may have miscalculated.

What is Putin’s end game in Ukraine?

Judging from Putin’s speech earlier today, the immediate goal appears to bring down the President Volodymyr Zelenskyy’s government, install a puppet regime, and turn Ukraine into a vassal state like Belarus. Beyond that, Putin likely sees this as a way to frighten the Baltic states and test NATO’s resolve and unity. 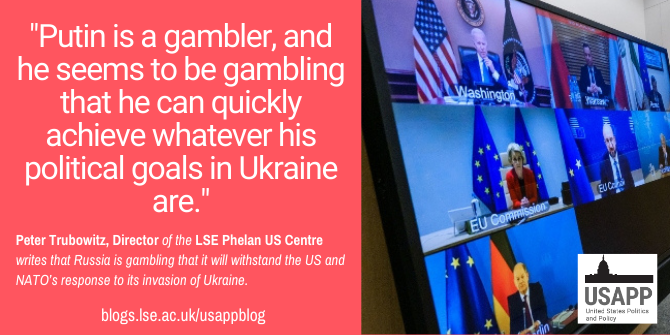 Putin is a gambler, and he seems to be gambling that he can quickly achieve whatever his political goals in Ukraine are and withstand anything that the US and its NATO allies are prepared to do in response. He’s assuming that there will not be a direct Western military response. The point of the saber rattling toward the West in Putin’s speech today seems to be that Moscow is in this for the long haul. Putin’s bet is that the West is not.

Putin signaled in his speech this morning announcing Russia’s military operation that he is prepared to counter Western sanctions by escalating the conflict and inflicting economic pain on Europe and the US.

These counter moves could take multiple forms, from cyber-attacks on Western governments and businesses, to export restrictions on Russian exports of oil and gas, grains, fertilizers and other goods that the West depends on, to banning overflight rights for Western airlines traveling routes to Asia. Intentionally or not, Putin’s actions could spark a refugee crisis, too, by driving Ukrainians to seek safe harbor in the West. It’s also worth remembering that Putin has built up a war chest of about $630 billion in foreign reserves since 2014, which could carry Russia for several months as conflict with the West escalates.

Of course, all of this assumes that Putin can quickly wrap things up militarily in Ukraine at a cost that Russians are willing to bear. Many leaders have made that kind of bet before, only to be proven wrong.