In new research, Young-An Kim and James C. Wo look at the implications of increasing racial and ethnic diversity in America’s communities on crime. Using evidence from Southern California, they tested the effects of racial diversity on neighborhood crime rates, finding that there were fewer violent and property crimes in neighborhood blocks which were more diverse, and especially those in more diverse areas. They attribute this to the greater opportunities created by diverse communities to overcome bias and create social ties and trust across different groups.

Racial and ethnic diversity in the United States has been steadily increasing in recent decades. Whereas most people would say that this is a beneficial trend because it promotes inclusiveness and tolerance, others argue that racial diversity might have unintentional, harmful consequences. There is an on-going debate over whether racial diversity leads to crime problems in neighborhoods or, contrary to some theoretical perspectives, means greater social cohesion, and therefore less crime.

Many studies have found that racial diversity is associated with more crime in neighborhoods. The main argument (rooted in social disorganization theory) is that racially diverse settings undermine social cohesion among neighborhood residents. Specifically, a more racially diverse population is thought to hinder the development of social ties and cohesion among residents, and thus, weaken the capacity of residents, themselves, to monitor and regulate criminal behavior – informal social control.

On the other hand, there is an alternative proposition that suggests racial diversity can enhance social cohesion and ties among residents if frequent opportunities for social interactions are provided. Drawing on contact theory (rooted in social psychology), the idea is that casual contacts among residents in diverse settings can reduce bias against those perceived to be “other” and create opportunities for them to develop knowledge-based mutual trust. Specifically, regular face-to-face interactions between different racial groups can help to reduce prejudice on diverse others, which in turn facilitates social ties, trust, and cohesion among residents across the group boundaries. Therefore, more diverse communities may mean lower levels of crime in neighborhoods.

How diversity could affect levels of crime

Although the two perspectives on racial diversity and crime may seem at odds with each other, we contend that they can be theoretically compatible. At lower levels, racial diversity may have a crime-enhancing effect because social cohesion among residents in different racial groups is likely weak, yet diversity can also foster inter-group tolerance and trust, and diminish group-based bias, if there are sufficient opportunities for frequent interpersonal contacts with other groups. That is, social contact between the groups can reduce the prejudice across different groups, if there are frequent enough contacts among people who are racially different.

Another important factor to consider is scale. Specifically, when looking at small areas, compared to a larger region, residents may have more chances for social interactions with others, which can reduce racial group-based bias and thus build social ties and trust with different racial groups. Such an environment can foster social cohesion among residents and thus effective informal social control. For instance, a resident may have more interpersonal or casual interactions, and feel more social cohesion with another resident living next or few doors down the street than others living in a place a few miles away. In addition, there should be different consequences for crime for a neighborhood surrounded by racially similar broader areas in comparison to those surrounded by racially diverse broader areas. 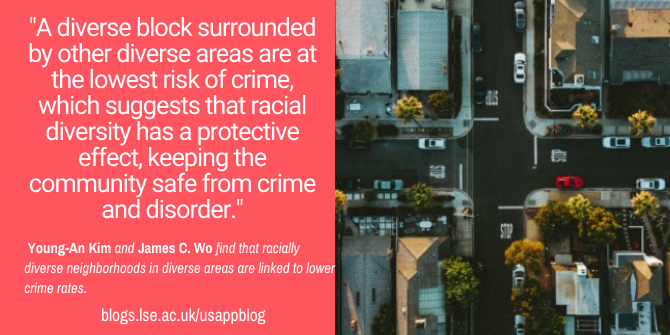 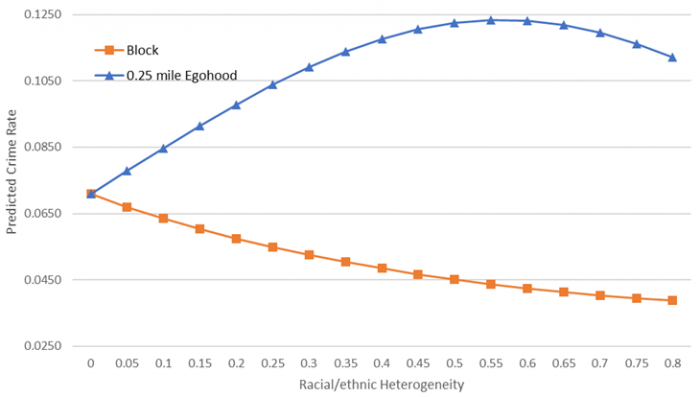 This result implies that racial diversity in broader areas mainly exhibits a crime-producing effect because social cohesion and informal social control among residents in different racial groups is likely reduced. However, as racial diversity increases even further, there may be a sufficiently large amount of each racial group, which provides more opportunities to develop interpersonal contacts and social ties and cohesion with each other and thus reduced amount of crime. Yet, such crime-reducing part of the pattern seems relatively small in magnitude, in general. 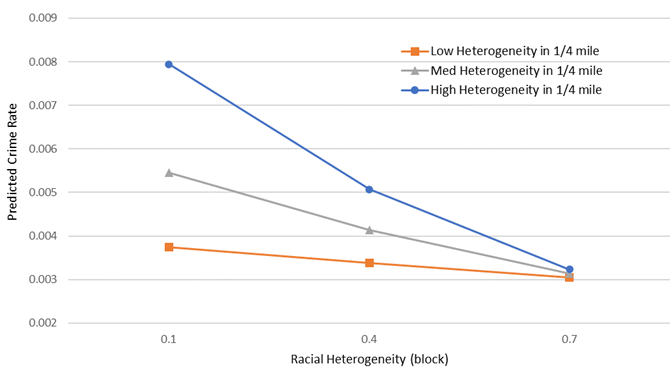 The crime-reducing effect of racial diversity in the block is particularly noteworthy compared to the crime-producing effect in the surrounding area. This suggests that racial diversity can have different consequences for crime when examining different spatial scales. Moreover, it is worth highlighting that a diverse block surrounded by other diverse areas are at the lowest risk of crime, which suggests that racial diversity has a protective effect, keeping the community safe from crime and disorder. Future work on racial diversity and crime in neighborhoods should incorporate factors such as housing policies, racial segregation, and gentrification, to name a few.

Young-An Kim – Florida State University
Young-An Kim is an Assistant Professor in the College of Criminology and Criminal Justice at Florida State University. His research interests focus on various areas such as neighborhoods and crime, criminology of place, immigration and crime, and geospatial analysis. Besides criminology, he is interested in sociology of health, urban sociology, and quantitative research methods.