Under the federalist system, US states have a great deal of decision-making power over a wide range of policy areas. In new research, Srinivas “Chinnu” Parinandi looks at how states can be encouraged to enact renewable energy development policies. Looking at the diffusion of state renewable energy development policy legislation over decades, he finds that state legislators are more likely to be influenced by the actions of other states and approve similar legislation at home when they are voting on it, rather than when bills are being developed.

Over the past fifty-plus years, scholars and much of the policy-making community have been captivated by the process of policy diffusion, where different cities, states, and even countries look to each other for ideas about what policies should be pursued or implemented. In the United States, where federalism gives the states significant policy-making autonomy, this focus on diffusion has been used to try to understand how states act on their own without instruction from the federal government and influence each other about policy choices. One area where this process is particularly important is in policymaking meant to stimulate renewable energy use in the electricity sector. While the federal government has failed to implement meaningful legislation in this area, many states have done so, leading some to view the states as a source of salvation for American green energy policy and to hope that more states can enact renewable energy development policies.

A key part of getting states without renewable energy development policies to embrace them involves showing them that other states have successfully adopted such policies. However, we know very little about when states are receptive to the policy-making experiences of other states during their own lawmaking processes. The vast majority of studies on diffusion assume (although there are exceptions) that states influence each other during the time of a bill’s final adoption; however, this assumption has not been tested, meaning that if the influence of other states occurs earlier in the lawmaking process, renewable energy proponents may have to tweak how they sell these policies to the states that have not yet adopted them.

In recent research, together with two recent graduates of the University of Colorado, I tested this assumption about policy diffusion, and compared whether the influence of states that have already adopted renewable energy development policies is more pronounced on a state legislature that is considering pursuing such policies when that state’s legislators are considering their final adoption, or when that state’s legislators are initially seeking allies within the legislature to build a case for adoption down the road (a practice called cosponsorship).

Since the decisions to choose to adopt and cosponsor legislation are decisions made by individual legislators, we depart from standard practice in studies on legislative policymaking, which often tends to view legislatures as single monolithic actors. Instead, we looked at whether individual legislators are more influenced by the renewable energy policy experiences of states that they consider to be ideologically similar—basically, have these signal states adopted renewable energy development policies or not—when they are choosing to cosponsor renewable energy development policy or vote to adopt it.

To that end, we gathered individual-level legislator data on successful and failed US state renewable energy development policy legislation over multiple decades. Our final dataset included over 15,000 observations and allowed for us to account for a host of individual-level explanations (such as the party of a legislator, whether that legislator serves in the House or Senate of a state’s legislature, and whether that legislator’s district includes a county bordering a state that has adopted renewable energy development policy) and state-level explanations (such as the unemployment rate in a state) in our analysis. 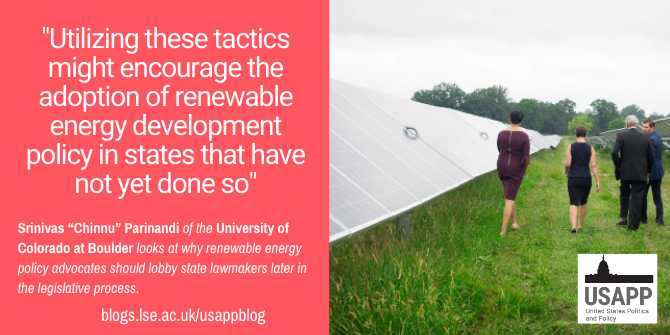 Much like other social science research, our work shows that people try to emulate like-minded peers inasmuch as they also try to make reasoned, well-informed decisions. This suggests that pointing out that states that have similar ideologies to undecided lawmakers (or that “look right” for the lawmakers to copy) have already adopted renewable energy development policies might help persuade those undecided lawmakers to embrace the same policies. Utilizing these tactics might encourage the adoption of renewable energy development policy in states that have not yet done so and enhance America’s commitment to a cleaner electricity infrastructure.

Ultimately, while one of the possible drawbacks of American federalism is that ambitious centralized initiatives are hard to implement, a potential benefit is that there are multiple avenues for policy development. This implies that there are multiple sales pitches for policy adoption, and our research suggests that to broaden the states’ dedication to green energy renewable energy advocates should embrace these individual-level sales pitches, including appeals to states that legislators might think are worthy of copying.

Srinivas “Chinnu” Parinandi – University of Colorado at Boulder
Srinivas “Chinnu” Parinandi is assistant professor of political science at the University of Colorado at Boulder. He is a specialist in energy and economic policy-making in the United States and has published in leading political science journals and been awarded funding from the National Science Foundation.