With the Roe v. Wade decision now likely to be overturned by the US Supreme Court this summer, Brittany R. Leach looks at the draft decision, and what Justice Alito’s flawed view of the history of abortion law and practice might mean for the future rights of women, people of color, LGBTQ+ people, and other groups. She writes that the decision shows that we should move on from the existing privacy framework which supports abortion rights to one which combines reproductive rights with social justice and protects bodily autonomy for all people.

In 1973, the Supreme Court ruling in Roe v. Wade held (on a 7-2 vote) that state abortion bans violated privacy rights, legalizing abortion nationwide in the United States. The court held that abortion was between a woman and her doctor in the first trimester, that it could be regulated for women’s health in the second trimester, and that the state’s interest in potential life allowed greater regulation in the third trimester. In Casey v. Planned Parenthood (1992), the court struck down laws requiring husbands’ consent for wives to receive abortions, but upheld laws requiring parental consent for minors (with a judicial bypass for minors endangered by this requirement). It replaced the trimester model from Roe with the present-day “undue burden” standard, which bans regulations imposing substantial obstacles to getting an abortion prior to viability (the earliest point when fetuses might survive outside the womb). Still, Casey maintained the fundamental right established in Roe.

The recently leaked majority opinion in Dobbs v. Jackson Women’s Health Organization is forthright: “We hold that Roe and Casey must be overruled. The Constitution makes no reference to abortion, and no such right is implicitly protected by any constitutional provision,” Justice Samuel Alito states. Although an official opinion is not expected until this summer, Chief Justice Roberts confirmed the legitimacy of the draft.

What Does This Mean?

The implications are broad and troubling. Presumably, if this draft is similar to the final opinion, each state would have broad authority to set abortion policy, including banning abortion. Yet, some language in the draft opinion (e.g., pg. 47) raises questions about whether future rulings could go even further, perhaps establishing fetal personhood or fetal citizenship, thereby gutting abortion protections in all states.

Moreover, several arguments in the draft opinion raise the specter that the court will further dismantle the rights of women, people of color, LGBTQ+ people, and others. For instance, Justice Alito argues that rights can only be considered implicit in the Constitution if such rights are “deeply rooted in this Nation’s history and tradition” and “implicit in the concept of ordered liberty” (pg. 5). Alito’s history of abortion law and practice is deeply flawed and misleading according to historians and other experts. Regardless, judging whether a right is legitimate based on how recently it was won is a terrifying prospect for women, African Americans, queer people, and others whose rights are not “deeply rooted” in a country with a long history of patriarchy, structural racism, bigotry against LGBTQ+ people, and so on.

Justice Alito’s argument that abortion is not mentioned in the Constitution is especially troubling given the many other cases that rely on implicit privacy rights to establish rights for marginalized people. These rights include: the right to use birth control (Griswold v. Connecticut), the right to interracial marriage (Loving v. Virginia), the right to have gay sex (Bowers v. Hardwick and Lawrence v. Texas), the right to gay marriage (Obergefell v. Hodges), and many more. Indeed, even the idea that women should receive equal protection under the law seems shaken, as the first case applying the Equal Protection Clause of the 14th amendment to ban sex discrimination was decided only a few years before Roe. If this seems alarmist, consider that the Equal Rights Amendment (which explicitly guarantees women’s rights) still has not been recognized as ratified, and the US is one of the few developed countries that has not ratified the Convention on the Elimination of all Forms of Discrimination Against Women (CEDAW). Recent attacks on voting rights  LGBTQ+ rights – especially trans rights – likewise give cause for concern. While one hopes that the court will not see fit to dismantle wide-ranging rights protections for women and other marginalized groups, as Alito claims, fears that this marks the beginning of an era of rights rollbacks rather than a single exceptional decision are not unwarranted. 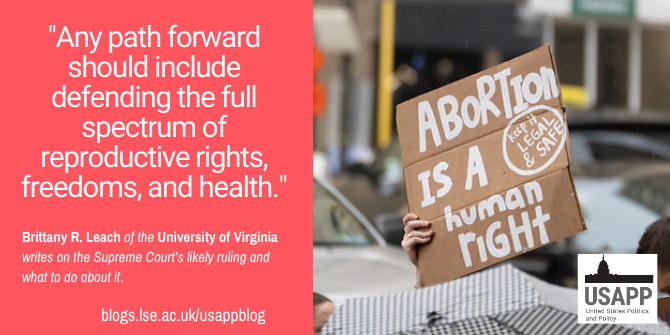 While the loss of privacy protections for abortion is in no way beneficial, this is a good time to reconsider whether “privacy” fully expresses the range of fundamental rights and freedoms at stake. The privacy framework is imperfect, and it has long been criticized by feminists for reinforcing the idea that the “private sphere,” or personal and family life, is inappropriate for governments to regulate. As Dorothy Roberts argues, understanding reproductive rights as negative rights grounded in privacy (rights to be free from government interference) rather than positive freedoms (rights to actually do something, including the necessary resources) has harmed low-income women through policies such as the 1976 Hyde amendment, which bans using federal funds for abortion. In other words, understanding abortion as a private matter does not provide robust protection for abortion access or address other reproductive rights that are equally important.

Likewise, Rickie Solinger and Loretta Ross have argued that ideas like “choice” and “privacy” fail to capture the full spectrum of rights related to reproductive, gender, and sexual justice. They argue for a framework that combines reproductive rights with social justice, called reproductive justice. This framework protects three core rights: the right to have a child, the right not to have a child, and the right to parent in a safe and healthy environment. It also protects gender expression and sexual freedom, including the rights of LGBTQ+ people. They are strong supporters of abortion rights. However, they do explain that focusing solely on abortion obscures other reproductive injustices disproportionately faced by women of color. Roe did not protect immigrant women from forced sterilization in Georgia just two years ago, for example. Fundamentally, reproductive justice is about protecting bodily autonomy for all people; that includes abortion rights, but it doesn’t stop there.

Any path forward should include defending the full spectrum of reproductive rights, freedoms, and health. It must include all women and all people with the ability to become pregnant. Banning abortion won’t end abortion any more than Roe protected all reproductive freedoms. With or without Roe, the central questions are safety and access.

What Should We Do?

Sadly, but also fortunately, reproductive rights activists have long been planning for this moment. Here are some ideas about what to do if you support abortion rights, both at the grassroots level, and policy changes to campaign for:

As well as organizing protests before the final decision is released, in the hope that public opinion will influence the courts, you can find a local abortion access group and help with their work, as well as ordering abortion pills in case you or your loved ones need them, and share this link: www.PlanCPills.org. You can also donate to abortion funds, especially the local ones listed here or here, to the National Network of Abortion Funds, and to Medical Students for Choice who advocate for providing evidence-based and up-to-date training on contraception and abortion in medical schools. You can also support to reproductive justice organizations led by Black women in the South, such as SisterSong, or other advocacy organizations led by women of color, such as the National Latina Institute for Reproductive Justice. You can read more about the reproductive justice framework here, and engage in consciousness-raising with pro-life people, especially women, in your life. For instance, you might share stories about the positive impact of abortion on people’s lives and warn them about the dangers of criminalizing abortion even for wanted pregnancies.

Aside from the actions you can take as an individual or with others, you can also campaign for your state and national elected representatives to  codify abortion rights in national and state-level legislation,  to recognize the ratification of the Equal Rights Amendment, and ratify the Convention on the Elimination of all Forms of Discrimination Against Women (CEDAW).

You can also call for your representatives to de-criminalize self-managed (self-induced) abortion, legalize telemedicine abortions using the abortion pill, permit nurse practitioners, physicians’ assistants, certified nurse-midwives, or other appropriate healthcare professionals to perform medication and aspiration abortions in the first trimester if it is within their training and scope of practice, protect doctors’ medical licensure if they perform an abortion in a state where the procedure is illegal, and to protect medical and data privacy to prevent pro-life app developers from collecting private information that could be used to prosecute abortion-seekers.

Note: This article gives the views of the author, and not the position of the author’s employer, nor of USAPP – American Politics and Policy, nor the London School of Economics.

Brittany R. Leach – University of Virginia
Brittany R. Leach is a Lecturer in the Department of Women’s, Gender, and Sexuality Studies. She recently received a PhD in Political Theory from the University of Virginia. Her primary areas of research and teaching are feminist theory, transnational feminism, reproductive politics, and Continental political thought in the modern and contemporary periods.