For decades, the World Economic Forum’s annual meeting in Davos, Switzerland, has attracted a lot of criticism and the idea of a “Davos Man”, rich, alienated, detached from his national roots, and full of empty talk, became a popular trope. However, Shawn Pope and Patricia Bromley analysed all of the organisation’s press releases for the past eight years and found that Davos Man has changed. The WEF can now count on “Davos Woman” and uses fewer words related to growth and development, and more related to social inclusion and the environment.

For the first time in two years, the World Economic Forum is holding its annual meeting in Davos, Switzerland, a posh ski resort where traditionally 3,000 heads of state, CEOs, celebrities, and other notable figures congregate to discuss the issues of the day. This year, likely because the meeting is being held in May rather than January, an estimated 2,000 participants will attend. As might be expected from its swanky location and elite attendees, the world’s most famous megaconference attracts a lot of criticism. An embodiment of the main barbs of this criticism is “Davos Man” – a stereotype that has persisted from the early 2000s of a transnational elitist who is, in the end, an empty talker. But does this stereotype still fit the participants of the World Economic Forum? To find out, we systematically analysed all of that organisation’s press releases, which have been published at a steady rate of nearly one every two days for the past eight years. These releases cover the main themes and happenings at Davos Man’s annual conference, as well as follow-on events. Here’s what we found.

When “Davos Man” was popularised in 2004 by political scientist Samuel Huntington, the world was rapidly globalising. In tune with the zeitgeist, Davos Man was a globalist – someone with “little need for national loyalty,” who “viewed national boundaries as obstacles that thankfully are vanishing.” Yet in recent years Davos Man’s horizons have remained fixed. Within WEF press releases, mentions of “global,” “international,” and “world” have stagnated (Chart 1). Meanwhile, “growth” and “economic development” have fallen by half (Chart 2). Headlines are less common, for example, that Africa’s Growth Story Is Only Beginning (2016) and Trade Is Best Tool to Fight Poverty and Promote Growth (2017). A growing theme, rather, is Earth’s finitude and fragility, and the opportunities and challenges that this poses. Mentions of “pollution,” “nature,” and similar words have grown four-fold. Press releases now proclaim, for instance, that Global Carbon Pricing Can Reduce Emissions and Pay For Itself (2021) and Financing Options Are Key to Africa’s Transition to Sustainable Energy (2021).

Davos Man was originally out-of-touch, someone who insulated himself from ordinary people and those who think differently. This critique, indeed, spawned the World Social Forum in 2001 – an explicit alternative to the WEF, which has been intentionally held around the same dates as the WEF for sixteen of the past twenty years, and which focuses centrally on the issue of global economic justice. Nowadays, however, one could easily mistake a press release from the World Social Forum for one from the WEF. Mentions of terms like “diversity,” “ethnicity,” and “equality” have increased five-fold in six years. Headlines like this one are now ordinary: Leading the Continent’s Digital Transformation, Championing the Disabled, and Empowering Rural Women: Meet this Year’s African Change-Makers (2020). As part of his social awakening, Davos Man has recently worked to welcome Davos Woman. To meet his ambitious goal of doubling the number of women at his annual conference in the next ten years, he has instituted a quota system for large firms, which currently must bring one woman for every four men.

A final complaint about Davos Man was that he was full of empty rhetoric. His meeting was derided as an intense, gregarious affair, repeated every year without anything of substance to show for it. Davos Man chats while the world burns. Yet this complaint is ringing less true. Davos Man is now more action-oriented. The WEF has reimagined its annual conference, not as a mere colloquium, but also as a platform for launching initiatives. Chart 5 shows a two-fold increase in the thematic of “partnerships,” “alliances,” “pledges,” and “collaborations,” reflected in press releases such as First Movers Coalition Launched to Drive Demand for Zero Carbon Tech (2020) and World Economic Forum Launches Initiative to Enable Equitable and Trusted Use of Data for Global Common Good (2020). In sum, the WEF now has a larger modus operandi: It not only builds consensus through dialogue, but also identifies leaders and galvanises them to take action. 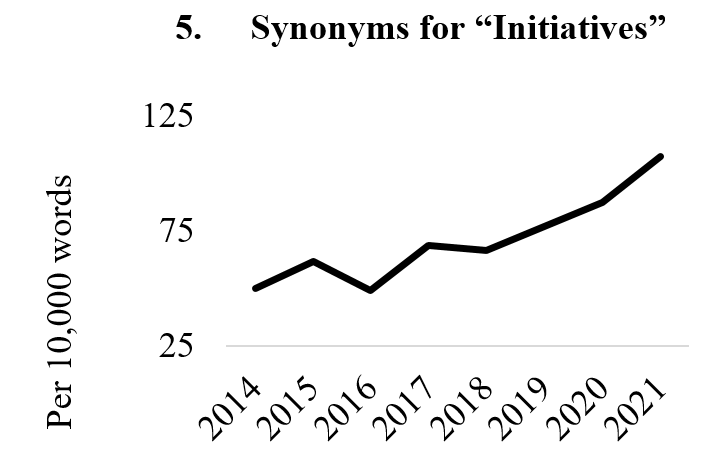 The remaking of Davos Man

Although he is resurrected by the media every year, the Davos Man of the early 2000s is becoming an anachronism. In recent years, the WEF has evolved to focus more on the issues of social inclusion and environmentalism and to embed these issues in a host of practical frameworks. The changes, to be sure, are still underway and many contradictions remain. Undoubtedly, the new Davos Man will continue to preach equality in its 2022 meeting, even as his conference remains one of the most exclusive events of the year.

Shawn Pope – Ecole de Management Léonard De Vinci
Shawn Pope is an assistant professor of business strategy at Ecole de Management Léonard De Vinci in Paris, France, a position that he took after receiving his PhD in sociology from Stanford University. He has written one of the only quantitative studies on the impacts of the world business associations, including the World Economic Forum, International Business Leaders Forum, and the World Business Council for Sustainability.