Following mass shootings in Buffalo, New York and Uvalde, Texas, the US Congress proposed and passed the first meaningful firearms legislation in decades, the Bipartisan Safer Communities Act. Matthew Lang gives an overview of the bill’s provisions, including enhancements to background checks, red flag laws, and greater investment for mental health services and school safety. He writes that while the legislation may do little to reduce the number of mass shootings, it may mark a turning point, breaking the long-standing Congressional deadlock on measures to address gun violence.

Prompted by recent mass shootings in Buffalo, New York and Uvalde, Texas, US in the last week, policy makers proposed, passed and signed into law the Bipartisan Safer Communities Act, arguably the most meaningful firearm legislation in decades in the United States. Fifteen Republicans in the Senate, including Senate Minority Leader Mitch McConnell, and fourteen Republicans in the House crossed party lines and supported the act. Although only 29 of 260 Republican members of Congress voted in favor of the law, their support allowed the Senate to invoke cloture and avoid any filibuster that may have delayed the passage of the bill.

With the bill signed into law, the next natural question is whether the provisions will be effective in reducing firearm violence. The main provisions of the law focus on who can legally purchase firearms, financial support for “red flag” laws and funding for mental health and school safety programs. The realized impact of the provisions is impossible to predict with certainty, but past research can help be a guide on how the bill may reduce gun violence and improve safety.

The Bipartisan Safer Communities Act enhances the background check process for buyers under 21 years of age. The National Instant Criminal Background Check System (NICS) will be used to determine whether potential buyers under the age of 21 have a juvenile record. The NICS has up to 10 business days to complete their investigation, potentially delaying the purchase of a firearm for a subset of individuals. How might this potential delay impact firearm violence? Researchers have found that purchase delays reduce firearm related suicides significantly, but the effect of purchase delays on homicide rates is mixed.

The act also expands the NICS so that the “boyfriend loophole” is reduced. Previously, those who were convicted of domestic abuse of their spouse was prohibited from buying a firearm. Now, those who are convicted of abusing their recent dating partners are also banned from purchasing a firearm. There is evidence that reducing firearm access for offenders of domestic violence may reduce intimate partner homicides. 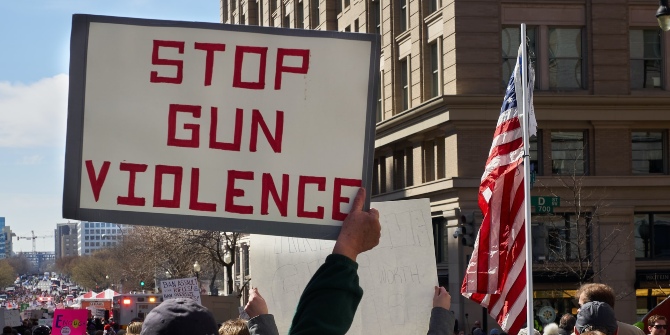 Photo by Chip Vincent on Unsplash

Other provisions are meant to reduce those with previous convictions from obtaining firearms illegally. This is done by clarifying the definition of a “Federally Licensed Firearms Dealer” and by making straw purchases (where someone buys a gun on someone else’s behalf) and gun trafficking federal offenses. It is not clear how these updates will translate into reduced gun violence, although it is unlikely to increase it.

Extreme risk protection orders, or “Red Flag” laws, allow judges to temporarily revoke someone’s access to a firearm if it is shown that they pose a risk to themselves or others. The Bipartisan Safer Communities Act allocates $750 million in funding for Red Flag laws to be implemented over the next five years. There is evidence that red flag laws can reduce suicide but homicides and firearm crime have not yet been connected to red flag laws. Currently, 19 states have red flag laws, but it is notable that 15 have enacted red flag laws since 2018. This has made it difficult to measure the long-term effects of red flag laws across a large proportion of the population. Nonetheless, the increased funding may allow policy makers to implement more effective red flag laws and potentially reduce access of firearms to those that are prone to carry out violent acts.

A final category of provisions in the Bipartisan Safer Communities Act focuses on investing in mental health services and school safety. Specifically, the act will increase access to mental health services through Medicaid and telehealth. Community Behavioral Health Clinics will receive additional support, as will National Suicide Prevention Lifeline. The Department of Health and Human Services will receive funding to expand mental health and suicide prevention training.

There is evidence that increasing access to mental health care can yield meaningful benefits to the population. Mental health insurance parity laws were passed in several states in the 1990s and 2000s and required mental health benefits to be included in health insurance coverage. There is evidence that enacting parity laws decreased suicide rates and improved labor market outcomes for distressed individuals. Recent research shows that increasing mental healthcare offices is associated with a significant reduction in crime rates.

While research suggests that increasing mental health resources can be socially beneficial, the recently passed mental health provisions differ from the scenarios examined in past studies. It is possible that the support for mental health services in the Bipartisan Safer Communities Act will lead to measurable improvements in violence, but researchers will not be able to determine the effectiveness for some time.

Mass shootings may not be reduced, but this may still be a turning point

The signing of the Bipartisan Safer Communities Act is considered by many as historic, given the lack of firearm legislation over the past three decades. But how effective will the act be? Increasing mental health care access, delaying purchases, closing the “boyfriend loophole” and implementing additional red flag laws can decrease suicide and possibly homicides.

Although the probability of mass shootings may not change following the passing of the recent act, there is reason for optimism. The passage of any firearm legislation signals that policy makers on opposite sides of the aisle can work together on a polarizing issue. If the passing of this act can lead to more targeted and effective gun violence polices in the future, the Bipartisan Safer Communities Act may end up being known less for the provisions in the act and more for being a turning point where policy makers realized they need to put aside their longstanding differences and come together for the safety of the country.