In recent years Florida has voted reliably for Republican candidates at both the national and statewide level, with the 2022 midterm results looking likely to continue that trend until recently. Kevin Fahey writes that new political events including the conflict between the state’s Governor Ron DeSantis and the Disney corporation, the US Supreme Court’s overturning of the right to an abortion, and revelations from the January 6th Commission mean that GOP electoral victories in Florida this November may no longer be a certainty. He writes that the Democratic anger these developments may engender makes predicting the midterm results in the Sunshine State near impossible.

I have an entire article written about the state of the Florida Republican and Democratic parties, about the anti-incumbent headwinds facing President Biden, about Republican advantages in Florida, and demographic issues that would confound the current Democratic coalition. It was a sober analysis that suggested the cost-of-living crisis would demobilize Democrats, while demographic changes in Florida would boost Republican vote share in several “swing” counties in the state. Inflation ranks as the top priority in most public opinion polls, and the only tool for reducing inflation sharply enough to benefit Congressional Democrats would be to trigger a recession, which would also be detrimental for Democrats’ political fortunes. In Florida itself, the Republican Party is benefiting from unique demographic advantages due to its aggressive recruitment of seniors, while the Democratic Party is unable to field effective candidates nor offer a coherent alternative message to rural and suburban voters.

And all my previous analysis is irrelevant, because Governor Ron DeSantis has decided to attack the state’s biggest employer, Justice Samuel Alito has decided to strike down federal abortion protections, and the January 6th Commission has revealed considerable evidence that former President Donald Trump and several prominent Congressional Republicans tried to illegally overturn the results of the 2020 Presidential election.

In light of these major simultaneous national stories, I wanted to instead discuss my decision-making process and how I have concluded that predicting Governor DeSantis’ and Senator Rubio’s performances in November is simply too difficult. 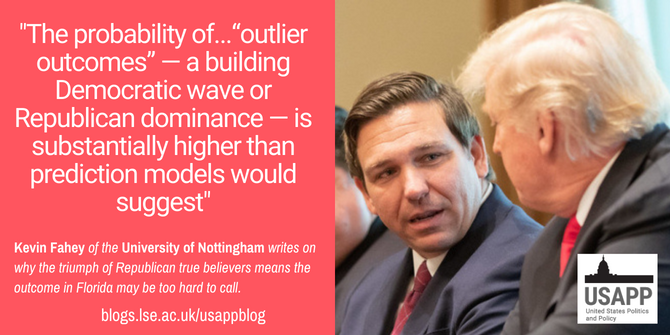 Political forecasting is based on the idea of predictability. Prediction in the sense of data scientists is not merely about correctly guessing the outcome in any given election, but minimizing the number of incorrect guesses across a number of forecasts. For example, a fair coin flip could have more accurately predicted Donald Trump’s win in 2016 than many forecasts due to the randomness of fair coins, but that fair coin would have done very poorly predicting the outcomes of every Gubernatorial race in 2018. A heuristics-based approach — say, relying on pundits to predict the future — also has a poor track record.

Thus, social scientists create prediction models to improve upon random guesses. For decades, election forecasters have tried to use a combination of polling — personal vote choice preference or approval of the incumbent — and “macro” factors — the strength of the economy, whether the country was at war, or if the incumbent party has been in office at least two terms — to predict which party or candidate would win an election. These models leave things out – they do not account for all potential attributes of a society or political campaign but comprise only those data necessary for accurate forecasts – in order to predict election outcomes. This is critical, because such models are informed by existing academic theories of voter turnout and vote choice, meaning they are vulnerable to revolutionary political shocks.

Can the Republican Coalition Stay Together?

These forecasts all point to a Republican sweep of Florida’s statewide offices in November — barring major changes to American politics. I believe we are seeing those changes now. Republican animosity towards big business may backfire and result in a fragmenting of their tenuous voting coalition, while the elimination of abortion and reproductive rights in many states should trigger substantial voter backlash. Yet the evidence of collective Republican culpability for the Capitol insurrection also suggests that efforts to manipulate the 2022 midterms to benefit Republicans is underway. Thus, the probability of so-called “outlier outcomes” — a building Democratic wave or Republican dominance — is substantially higher than prediction models would suggest. My rationale is as follows.

First, for decades, the Republican Party relied on being the party of big business. Republicans could count on large firms, and their top-ranking employees, donating large sums of money to the party and remain reliable voters, and in turn Republicans would offer businesses tax incentives and the opportunity to capture government policymaking bodies. Yet Republicans could not rely on large firms to win elections, largely because the executives of these firms could not constitute a majority in any electorate.

So Republicans also incorporated into their coalition social conservatives, who do not support the business wing’s laissez-faire approach to government. Instead, social conservatives articulate a vision of rule that involves heavy government involvement in the private lives of individuals. This included eliminating the right to abortion, restricting access to contraception, criminalizing same-sex activity, mandating Christian displays of faith in public spaces, and restrict immigration from non-Christian societies. These ideas were irreconcilable with the interests of the business wing, who saw these unpopular intrusions into government life as a threat — largely in that it would keep them.

Republican party leaders had a solution that worked well for a long time: promise major rollbacks of individual rights for the social conservatives, allow the institutions of modern government — the courts, legislatures, presidential vetoes — to block these rollbacks, and then say that the struggle would continue. This was a game where everyone understood the rules: gin up social conservative votes, promise everything, deliver nothing, rinse and repeat.

But eventually the solution failed. Republican elites were overrun by successive waves of true believers — the 1994 Contract with America, the 2009-2010 Tea Party, and finally with Donald Trump in 2016. These individuals did not understand the game, did not know that the goal was to block these proposals, and have now begun to implement radical policy changes. Governor DeSantis has targeted Disney for even tepidly standing up for LGBTQ+ rights in Florida. Samuel Alito’s opinion is not nearly as explicit as Clarence Thomas’ concurrence, which argues that the rights to same-sex marriage, same-sex sexual activity, and even contraception should be rolled back. And the January 6th Committee has demonstrated conclusively — despite having not even concluded its work — that Republicans worked in concert with Donald Trump to exercise undemocratic means of holding onto power.

A Democratic resurgence in Florida?

What does this have to do with political forecasts? While it is possible the traditional economic model applies, the Supreme Court’s decision, Governor DeSantis’ decisions, and Donald Trump’s culpability may encourage significant Democratic anger at the polls this year. These decisions will have lifelong and durable impacts — as much so if not more so than inflation — on the lives of hundreds of thousands of voting, and persuadable, Floridians. The executives of large corporations, concerned with Republican governance, may finally move with their wallets and their feet to Democratic campaigns. Uncertainty over Disney’s future might make conservative Disney employees, and conservative employees of Disney-dependent firms, vote Democratic for the first time. And social conservatives, who have now caught the car, have fewer reasons to vote for the Republican Party and could stay home in November.

This makes forecasting much more difficult — polls-based models use likely voter filters, which may miss out on large swathes of the eventual electorate in such an uncertain climate. Conversely, Democratic voters may react to this avalanche of unfavorable policy with apathy, not vote, and thus enshrine social conservative governance for years. And outright Republican manipulation of the election is now a reasonable expectation. The probability of such “tail events” is higher in 2022 than it was in previous elections.

Normal election forecasts might resemble the — purely hypothetical — Figure 1 below. In it, a statewide vote share is estimated with a range of uncertainty around it. You might represent this uncertainty in a histogram, showing the proportion of events that fall within a certain range, or the probability of individual outcomes. The most-likely outcomes will be clustered toward the center of a normal distribution, with less-likely outcomes tapering away symmetrically. Such an event would indicate a solid Marco Rubio win of between 5 and 15 percentage points based on current polling, but with a small probability of Democrats winning. I represent this graphic below: 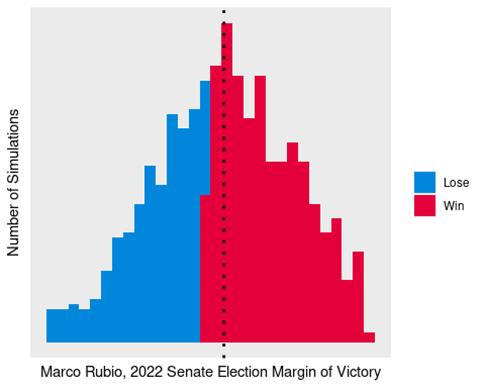 By contrast, what I believe these events point to is a world more closely resembling Figure 2 below. While there remain many outcomes located at our near the “normal” average outcome of a narrow-but-comfortable Rubio win, there are considerably more “tail-end” outcomes, including those where the Democrats win by large margins and those where Republicans win by large margins. 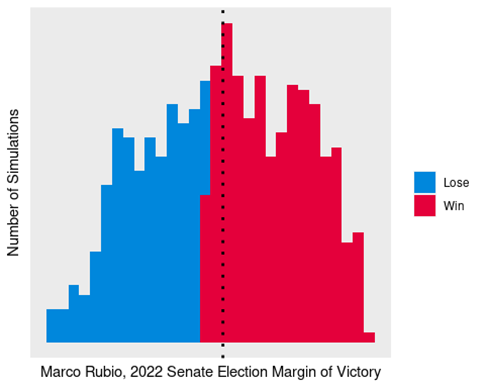 These tail-end outcomes represent added uncertainties as outlined above. Democrats may be energized to vote due to the Supreme Court’s decisions, Republicans may splinter as a result of social conservatives attacking business conservatives, and Republican activists may be less motivated after “winning” policy concessions via the courts. Therefore we have more predictions of a Democratic win that won’t manifest in prediction models, particularly polls-based models, for weeks or months. Or they might not at all, given recent Republican recalcitrance to participate in public opinion polling.

At the other end, these recent events may trigger mass Democratic apathy and disenchantment with politics. Republican activists may be emboldened by policy wins. And the January 6th Commission has clearly demonstrated that the Republican Party and its membership view electoral manipulation as acceptable, and recently information suggests election meddling is being institutionalized across the Republican party in its state and local branches. Therefore, we have more predictions of a larger Republican win that may not manifest in polling.

And for these reasons, I do not know whether Ron DeSantis or Marco Rubio will win their races this fall. They might win outright. They might lose, but be emboldened by the absence of an indictment against Donald Trump and therefore overturn a democratic election. They might lose outright and accept the outcome. A decade ago, I would have assigned an incredibly low probability to the latter two outcomes, but today the probability is substantially high enough that I do not have high confidence in any individual outcome.