Throughout recent US political history, certain issues have been considered to be “owned” by either party, such as national defense for the Republican Party and healthcare and the environment for the Democratic Party. But what does the rise of partisan polarization mean for the importance of issue ownership by the parties?  In new survey research, Jamie M. Wright, Scott Clifford and Elizabeth N. Simas find that partisanship now means that highlighting a party’s ownership of an issue is only meaningful to independent voters, with partisans already viewing their party of choice as being more competent on these issues.

Political parties have longstanding reputations for the ideologies they advance, the character traits their representatives possess, and the issues that they “own.” Issue ownership is a theory within political science that posits that each party is perceived as the most capable or competent at handling specific issues, and that perception can be politically and electorally beneficial to the parties. In the United States, both scholarship and polling consistently show that the Democratic Party is seen as better able to handle issues related to the environment, healthcare, poverty, and Social Security, while the Republican Party is seen more competent on the issues of crime, national defense, and terrorism.

A resulting implication is that these stable stereotypes about the parties’ competencies should help simplify voter decision-making; voters merely need to identify the most pressing problems facing the country and choose the party that is most motivated and able to handle those problems. But such a proposition seemingly ignores that fact that partisanship increasingly dominates voting behavior at all levels. Given current levels of partisan polarization, are individuals still willing and/or able to acknowledge the strengths of the opposite party? And even if they do, is there any room left for those beliefs to affect vote choice?

These are the questions we investigate in our recent research which examines the effects of issue ownership on vote choice by using a novel design that manipulates the importance of “owned” issues. Our results suggest that while partisanship has not eliminated perceptions of issue ownership, partisan identity limits these potential effects. Specifically, we find that priming a party’s owned issues only has a significant effect on the vote intentions of pure independents. Thus, while ownership is constrained, parties still stand to gain when the issues they own are brought to the fore. 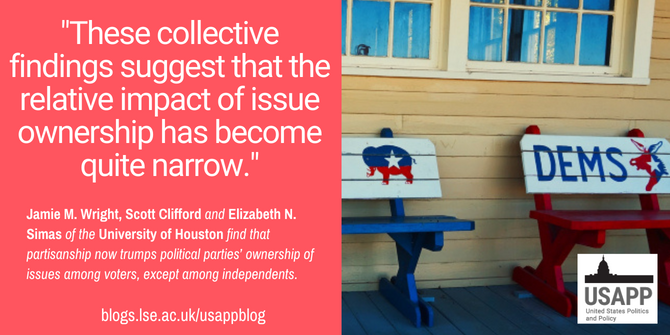 Photo by Robert Linder on Unsplash

The Persistence of Ownership

To examine the prevalence of issue ownership beliefs and their effects, we fielded an online study among 1,009 US adults in September of 2019. Toward the beginning of the study, respondents separately rated how well each party would handle six issues, each on a five-point scale ranging from “terrible” to “great.” Three issues are historically Democrat-owned (poverty, environment, healthcare), while three are historically Republican-owned (national security, crime, terrorism). To create a measure of relative perceptions of ownership, we subtracted scores for the Democratic Party from scores for the Republican Party for each issue, then averaged each set of three issues.

Figure 1 shows that the full sample means generally follow expected patterns of ownership—Democrats have an advantage on the environment, poverty, and healthcare, while for Republicans the advantage is with national security and terrorism. The exception is crime, where respondents see essentially no difference between the two parties. When we differentiate by the partisanship of respondents, we see that the mean perceptions of independents are like those of the full sample, but that the means for partisans suggest a good deal of bias. While both Democrats and Republicans view their own parties as better at handling all six issues, partisans give their party a significantly smaller advantage on the other party’s owned issues. Our initial results support the idea that even though partisanship clearly influences perceptions, issue ownership is still a factor in helping people to decide how to vote.

Ownership Perceptions and the Vote

Respondents later proceeded to the experimental portion of the survey and were randomly assigned to a Democrat or Republican-owned issue condition. In each condition, respondents saw three sets of three headlines. Each headline included a summary of the article and a corresponding image. Two of the three headlines in each set were about a political issue owned by that party (i.e., national security, terrorism, or crime in the Republican conditions and environment, healthcare, and Social Security in the Democratic conditions). The third headline was about entertainment, food, or science. To ensure that respondents were reading the headlines, we asked them to indicate which of the three articles they would be most interested in reading. After exposure to all headlines, respondents were then asked about their preferences between Republican President Donald Trump and four potential Democratic candidates: Joe Biden, Kamala Harris, Bernie Sanders, and Elizabeth Warren. We combine responses to these four questions with respondents’ expressed preference for the Democratic or Republican candidate for US Congress in their own district to create an index of partisan vote choice, where higher values indicate greater support for Republicans.

As Figure 2 shows, exposure to Republican-owned issues increased support for Republicans. But this difference between the Republican-owned issue primes and the Democratic-owned issue primes is only meaningful among the 161 pure independents in our sample. Further analyses suggest that these effects are also limited to just those independents who recognize the issue ownership reputations of the two parties. Thus, our results suggest only a modest impact of increasing the importance of owned issues. 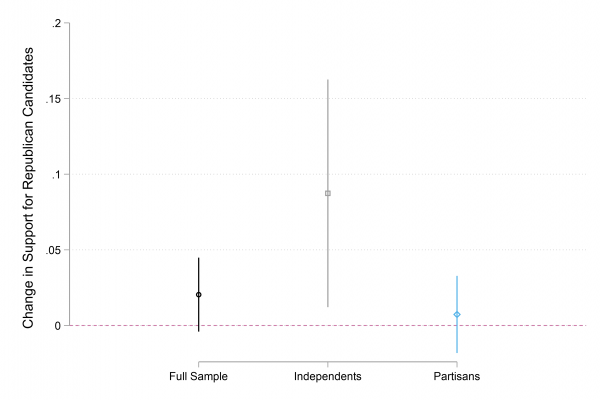 Figure plots the coefficient estimates (and 95% confidence intervals) from the full model.

Our results provide evidence for only a modest impact of increasing the importance of owned issues. But when broken down by partisanship of the respondents, this provides a more complete picture of the way issue ownership operates today in a polarized era. Only among independents do we find any movement toward voting for the party that is seen as advantaged on specific primed issues. These collective findings suggest that the relative impact of issue ownership has become quite narrow. And given the unlikelihood of moving strong partisans from voting for their own party, that makes the behavior and courting of independents that much more critical during election times.