Research is often seen as a man’s job, and in a patriarchal society it can be socially difficult for a woman to declare herself a researcher. This is all the more true in conflict settings, such as the Democratic Republic of the Congo’s North Kivu and South Kivu provinces. And yet, being a woman in this setting, can offer some advantages (for instance, in earning a respondent’s trust). This is particularly the case, for example, in the context of discussing sexual violence, where victims are often more open to sharing information with fellow women.

It is a trend in our respective circles, though, to undermine female researchers with arguments rooted in a kind of chauvinism. This happens above all among our loved ones, at the family level, with friends, and among colleagues who make comments like: ‘This is not a job for women’. ‘She won’t be able to hold up in difficult fieldwork conditions’. ‘How will she maintain a household while doing this sort of work?’ While the male researcher is seen as a facilitator, someone who can open any door, at any level. A woman doing research is often considered too fragile and in need of a third-party’s buttressing and support.

And yet, this female researcher (married or not), has her own skills and ambitions, regarding the world differently and knowing that through her own perspectives she is contributing to the production of academic knowledge. Of course, the realities of the field present her with challenges that can be difficult to overcome at times, but ones that she nevertheless wants to face. Yet, once on the ground, the difficulties a female researcher can take on are no less daunting. Her role as researcher is often not easy to negotiate within local communities. My own experiences bear witness to this.

Throughout 2018 I was involved in a study that required me to conduct interviews with traditional leaders of the Burhinyi community.  In my attempts to organise focus groups, I encountered the following reaction: ‘Ngahi bakazi banaderha omubalume ? Ezo nyigirizo zibaharibisize ! Aleke omulume ye aderhe’ (from one traditional Burhinyi leader in the local Mashi language). This is to say: ‘Who ever heard of a woman leading a meeting when there are men present? Education has really spoiled these women. She ought to let a man speak!’ Another one of the traditional leaders added, ‘Besides, what did she tell her folks when she was coming here? Parents have really lost their authority over their children.’

Another project on child labour in mining sites took me, as part of a mixed team, to the Mukungwe mining site in Walungu. The site is home to old, young, and child miners, as well as prostitutes – all hailing from various places in search of a means of survival. Our arrival sparked general chaos in the site, with everyone shouting, ‘The écomogs are coming‘ – which was to say, ‘New prostitutes have been recruited’. We were mocked throughout our research, in a way that even posed a certain kind of threat. One of my female colleagues observed, ‘If it was just us women here, the prostitutes might fight us, thinking that we’ve come to steal their men – or we could end up raped by these miners!’

These types of experiences are difficult to manage and digest. And indeed one may sometimes ask if there is really is a place for female researchers in conflict settings such as the eastern DRC.

Other experiences however bear witness to the fact that a female researcher can sometimes negotiate access in settings to which men would struggle to gain entrance. She can also enter into conversations that a man would not easily be able to have. For example, during a study on land conflicts in Bukavu I was sent to speak with heads of households about the ways in which they acquired their plots. My advantage as a female researcher was evident in the sorts of spontaneous responses I received from many female informants who would not have wanted to divulge certain realities to my male colleagues. ‘I received this plot of land as a gift from a married man I had an affair with while working as a waitress in a bar’, one of my interviewees confided, ‘As a woman, I think you understand what I mean… I can tell you, since it’s just between us women’.

Other female researchers I’m friends with have shared experiences from their work in Kanyola in Walungu Territory, where sexual violence is widespread. Unsurprisingly, female victims were more comfortable opening up to women, and at times even refused to speak to men on the team, since the latter reminded them of their attackers. As a result, female informants demonstrated a certain reticence to engage with male researchers.

Female researchers often encounter enormous challenges in conflict settings like North and South Kivu. The hollow glances, prejudices, and distrust we face from local communities can present immense challenges, even to the point of putting us in physical danger. At the same time though, our experiences demonstrate that female researchers do have a place in conflict settings. In some cases, they can more easily connect to vulnerable people and access hidden discourses on taboo subjects. It is nevertheless imperative that we recognise the added value of mixed (male and female) teams, of supervision for both male and female researchers, and of properly reflecting on security considerations in the field, which can be different for men and for women.

The ‘Bukavu Series‘ is the result of a collaboration between the Institut Supérieur de Développement Rural de Bukavu, and three partners of the Governance in Conflict network: the Université Catholique de Louvain, the Groupe d’études sur les conflits-Sécurité Humanitaire, and the LSE Firoz Lalji Centre for Africa’s partner institution, Ghent University.

Irène Bahati is a teaching assistant at the Department of Commercial Sciences at ISP/Bukavu and researcher at the Research Group for Violent Conflict and Human Secutity GEC-SH.

Invisible Voices in the Production of Knowledge March 4th, 2020 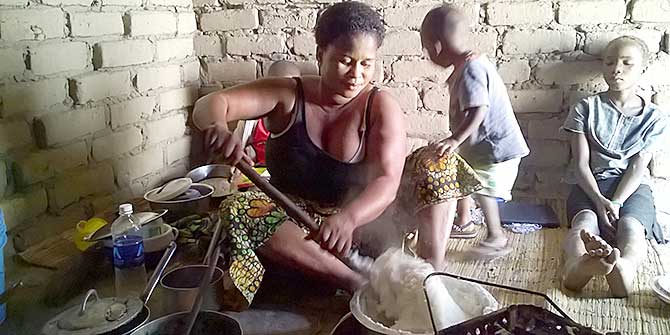