The EU referendum campaign is heating up. Josiah Mortimer writes that since our membership of European Union is a crucial constitutional issue, there’s one issue that can’t be ignored: democracy. We need a real debate on Britain’s democratic relationship with Europe, beyond simple in/out divides. This is something that can unite both camps.

Whether Britain stays in the EU or not, there’s a democratic deficit that must be addressed when it comes to our relationship with Europe.

On Monday,  Welsh First Minister Carwyn Jones and UKIP leader Nigel Farage will go head to head at the Institute for Welsh Affairs. There are key questions both camps must answer.

Carwyn Jones has in the past raised the issue of the so-called ‘Bridgend Question’ – the fact that in the European Council of Ministers, Britain’s case on for example farming policy is always put by Westminster’s Minister for Agriculture, regardless of whether Welsh, Scottish or Northern Ireland Ministers agree to the line or not. How do we address this question in the context of the referendum if voters choose to stay in the EU?

And there are questions for Nigel Farage too – if Britain does vote to leave the EU, it will have no say over the trade rules we’ll need to comply with in order to conduct our business with Europe. How will Britain outside Europe ensure that citizens and their elected government have real influence over these issues? And if the devolved nations vote to stay in the UK but England votes to leave, should England’s votes pull Wales, Scotland or Northern Ireland out of the European Union?

What’s more, the scale of the constitutional change that would result from Britain leaving Europe would have to be addressed nationally. We would need a constitutional convention of citizens to look at how we move forward as a democracy, after what would be a huge political change.

If we remain in Europe, there are vital reforms we must make to improve the UK’s democratic relationship with the EU – and give Wales and the other devolved nations more of a voice over European affairs.

The Electoral Reform Society is making four key recommendations for if Britain votes to stay in the EU:

Why? For a start, the voting system for the EU elections puts power in the hands of parties, rather than citizens, allowing party bosses to draw up candidate lists behind closed doors. We need a system which lets the public decide: a candidate-centred voting system – the Single Transferable Vote – where citizens can actually pick the representatives themselves.

Secondly, ministers from the devolved nations should have a right to hold UK ministers to account on the stances taken by the government during negotiations. The discussions in the run-up to the vote affect people in Wales, Scotland and Northern Ireland significantly – whether it’s in terms of employee rights or free trade, environmental legislation or government vetoes.

And if we vote to stay in, Ministers from the devolved nations should have the opportunity to take part in meetings of the Council of Ministers. It is not right that they are locked out of essential debates: other EU countries such as Germany and Belgium allow federal regions to participate – there’s no reason we can’t.

Citizens also need far more of a say over what happens in the EU – including shaping EU legislation. From citizens’ assemblies to public hearings and open debates on EU legislation in Parliament, we can open up the policy-making process so that the people affected by European law aren’t left out in the cold if the UK votes to stay in.

Stay or go, the elephant in the room is clearly a need for a proper debate on democracy and our relationship with Europe.

The choice to remain or leave has huge implications for Britain’s constitutional future. The sooner we start talking about this, the better.

This article draws on an ERS report published in 2014 entitled ‘Close the Gap: Tackling Europe’s Democratic Deficit’ which laid out 12 major recommendations on EU democratic reform. Read the full report and recommendations here. This post was originally posted on Democratic Audit, and represents the views of the author and not those of the BrexitVote blog or the London School of Economics.

Josiah Mortimer is a Communications Officer at the Electoral Reform Society. 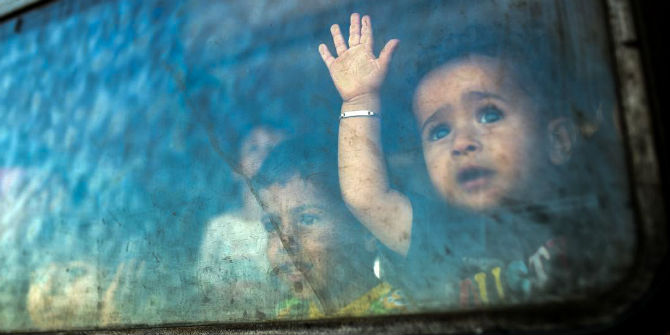