Over £9m has been spent on leaflets for all British household outlining the arguments in favour of remaining in the EU. But do campaign activities actually sway voters in referendums? Would campaigners do best to try to change minds, or simply motivate their supporters to turn out at the polls? Which arguments will prove decisive? Sara Hobolt (left) and Sara Hagemann report on the expert evidence gathered at the eighth LSE Commission on the Future of Britain in Europe.

Looking at the development in vote intentions ahead of the upcoming referendum on UK membership of the EU, it is tempting to conclude that the campaign makes no real difference. The authoritative EU Referendum Poll of Polls, compiled by Professor John Curtice, shows remarkably little movement in aggregate public opinion. The race is too close to call, with the Remain side slightly in the lead in telephone polls and the Leave side ahead in most online polls. So does this static picture mean that campaigners’ efforts are in vain?

The importance of the campaign was one of the questions addressed in the 8th Expert Hearing of the LSE Commission on the Future of Britain in Europe, which brought together leading scholars, pollsters and politicians. The general consensus, based on evidence from referendums in Britain and across Europe, is that the campaign is often decisive to the outcome. Dr Alan Renwick, who has developed a model for forecasting referendum outcomes based on previous referendums and polls, noted that there is generally a small shift towards the status quo (the Remain side in this case) in the final weeks of the campaign. Earlier polls tend to overestimate voters’ desire for change.

The current referendum campaign is likely to matter in two ways. First, in persuading voters what the referendum is about and second, in each side’s ability to mobilise their supporters to turn out.

Despite the deceptive simplicity of the ballot question itself (“Should the UK remain a member of the EU or leave the EU?”), there is very little agreement about what the key issues at stake are. The central challenge for Remain and Leave sides is therefore to shape the issues that will matter when people cast their vote. The Remain side emphasises the disruption that Brexit would cause to the British economy (“a leap in the dark”). The Leave side, in contrast, highlights the threat to national identity and sovereignty posed by the EU and immigration (“Take back control”).

Professor Simon Hix and collaborators, who have run a series of survey experiments to test the strength of these competing “frames”, find that arguments from both sides, whether economic, political or cultural, have the power to change voters’ minds about which way to vote. Other research shows that the so-called “losers” of globalisation, those with lower levels of education and working class occupation, are more likely to be opposed to the EU, whereas the “winners” of globalisation – e.g. highly educated professionals – are much more favourably disposed. For those who say they will vote to stay in the EU, the argument that we’ll be worse off economically if we leave the EU generally carries greater weight than for those who intend to vote to leave.

Yet the losers of globalisation face a dilemma: on the one hand they are generally more critical of the EU and more concerned about immigration, but on the other hand they have the most to lose financially if a Brexit vote causes economic disruption, as they are often in a more vulnerable position in the labour market. A focus on economic arguments, rather than cultural or political ones, is thus likely to boost the Remain side.

But it isn’t just issues that matter to the outcome in referendum. The popularity of the messengers matters too. Referendums held when the government is unpopular are more likely to end in defeat. So far, David Cameron has been a great asset to the Remain campaign, but his dwindling popularity presents a real problem for the pro-EU side.

Referendum campaigns work not only by persuading voters which issues are the most important, but also by mobilising people to vote. Evidence from other EU referendums has shown that voters are very similar to non-voters when it comes to vote intention; in other words, turnout shouldn’t make a great deal of difference. Yet this could be different in the Brexit referendum. Survey evidence from YouGov and other polling organisations has shown that individuals who oppose membership are more likely to vote than those who want Britain to remain in the EU.  Moreover, older Britons are significantly more Eurosceptic than younger ones, and we know from general elections that age matters to turnout, since the young are much less likely to turn out. This could give a sizeable advantage to the Leave side, especially if this is a low-turnout referendum.

The government will be hoping that its leaflets convince a sizeable proportion of the electorate of the importance of casting a vote on 23 June. 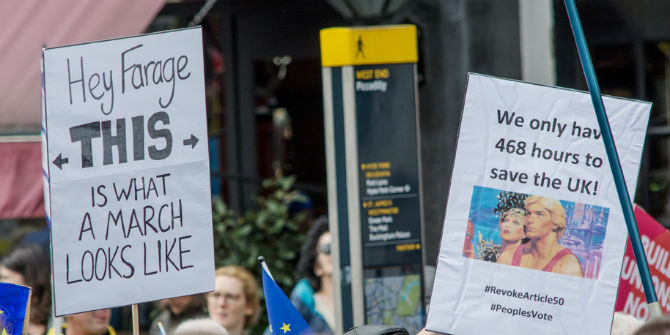