Brexit supporters – including Government ministers – regularly claim that when it comes to UK withdrawal from the European Union and future bilateral relations, “no deal is better than a bad deal”.  This mantra is based on confused thinking, writes Michael Johnson, in the first of three posts.  The issues that will arise respectively if the UK successfully negotiates agreements on withdrawal and future relations, or if no agreement is reached, are wide-ranging and profoundly important.  The simplistic claim that “no deal is better than a bad deal” raises many questions both of definition and of policy and provides no answers.

First, according to Article 50 of the Treaty on European Union a withdrawing member state must negotiate the practical terms of exit – the so-called “divorce settlement” – within two years of notifying its intention to withdraw, unless all the parties unanimously agree to extend the two year period.  If the negotiation on exit terms were to fail, at the end of the two-year (or other agreed) period the withdrawal would take place with no formal agreement between the parties in place.  Primarily Article 50 covers arrangements for withdrawal from the EU institutions such as severance terms for staff and payment of pensions, fulfilment of contractual financial obligations, disposal of UK investment in EU assets, and continuing participation in valuable joint projects eg. in science and technology, policing and defence.  Essentially the question here is determination and settlement of liabilities which the UK has incurred as a member state.  Brexit without a settlement on all these issues would leave many and very damaging loose ends on both sides, giving rise to years of confusion and dispute.

Second, the withdrawing state and the EU27 will need to negotiate a detailed basis for long-term bilateral relations.  In addition to laying the basis for negotiations on the “housekeeping” aspects of Brexit, Article 50 presupposes that withdrawal negotiations will take into account what it calls a “framework” for future relations.   It can be argued that logically this means that no deal could be struck under Article 50 unless that framework had been settled first.  But there is no definition of “framework”, and no agreement on whether it means a detailed blueprint for future long-term relations, or simply a list of headings for future negotiation.

The UK Government has argued that a comprehensive agreement on future relations should be in place by the time the two-year Brexit negotiating period expires in March 2019 (or later if there has been an agreement to extend it).  Some member states however have insisted that negotiations on UK/EU27 future relations can begin only once Brexit has been completed, so that the Union would be negotiating from first base with the UK as a “third country”.  In its Article 50 negotiating guidelines the EU Council has adopted a compromise position, indicating that preliminary discussions on the “framework” could take place within the two-year period provided that satisfactory progress had been made on key withdrawal issues such as the eventual financial settlement, citizens’ rights and the vexed question of administration of the land border between Northern Ireland and the Republic of Ireland.  EU negotiating directives made public on May 29 2017 indicate that the Union wants to see these matters settled in a first phase by the end of 2017 in order to facilitate negotiations on other withdrawal issues.

Third, there is a tendency to discuss future UK/EU27 relations predominantly in terms of trade relations and the mechanics of bilateral trade.  International relationships generally begin with trade relations, or at least have them as a central concern, and this is obviously the case with Brexit.  But the issues raised by Brexit go far wider than trade.  For example, in connection with the question of UK and EU27 citizens’ rights following, serious questions have been raised about the future and cost of reciprocal healthcare funding between the two sides.  Issues such as continuing participation in joint projects, eg. in science and technology, policing and defence are vitally important in the longer-term perspective as well as in the immediate context of the withdrawal negotiations.

What would constitute a “bad deal”?

Government ministers and Brexit supporter frequently repeat the assertion that “no deal would be better than a bad deal”.  Subsequent posts will analyse the practical consequences for both the UK and the EU27 if agreement cannot be reached by the Article 50 deadline on the immediate terms of withdrawal and possibly on economic and wider bilateral relations for the long term.  They will conclude that there is no economic sense in which some – or any – form of bilateral deal which provided for improved bilateral trade prospects could fail to be preferable to “no deal”.

Therefore, we have to look elsewhere for a definition of what might in the Government’s eyes constitute the “badness” of a “bad deal”.

The Government led by Theresa May has repeatedly stated that the UK will leave both the EU customs union and the Single Market.  Among the negotiating objectives and priorities which have been articulated so far, it has laid down four so-called “red lines” for the Brexit negotiation:

Given that any preferential deal that could be negotiated must be economically more advantageous than “no deal”, presumably a “bad deal” would be one which infringed one or more of those red lines and was seen therefore not to disengage the UK sufficiently from the limitations imposed by EU membership.  Even a deal which was economically advantageous could be condemned in those terms as “bad”.  Because of the political firmness with which the Government has committed itself to the red lines as its negotiating basis, they effectively render unnegotiable its own aim of negotiating the “best possible” agreement with the EU27.

A later post looks in more detail at some of the main options for future bilateral UK/EU27 relations.  Meanwhile, and as examples of the impact which those options would have:

It appears therefore that each of these options could be ruled out a priori by the red lines.  It is impossible at this stage to be more precise, given that the Government has given no public indication of what it would regard as the “best possible deal” for both sides.

Subsequent posts consider in more detail the economic and procedural consequences for the UK and EU27 of failure to reach a formal Brexit deal (the “no deal” scenario), the types of possible special bilateral agreements that have been mooted, and the way in which the Government’s “red lines” appear – on present form – to rule out the possibility of a successful post-Brexit deal.

This is the first of three posts looking at Theresa May’s assertion that “no deal is better than a bad deal”. It represents the views of the author and not those of the Brexit blog, nor the LSE. 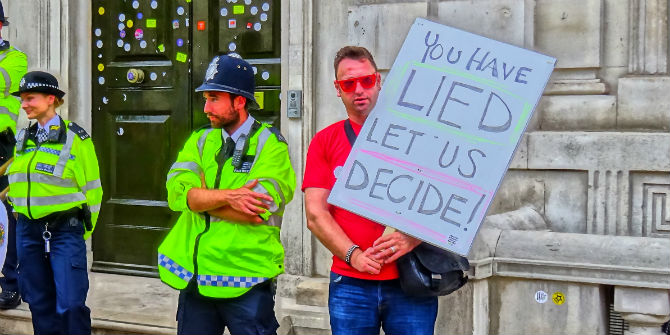