What does it mean to be cosmopolitan – to be the kind of ‘global citizen’ whom Theresa May famously described as ‘citizens of nowhere’? Does it really make people care as much for people in other countries as they do for those of the same nationality, or do cosmopolitans pay only lip service to EU solidarity? A study by (left to right) Theresa Kuhn (University of Amsterdam), Hector Solaz (University of Essex) and Erika van Elsas (University of Amsterdam) in the UK and Germany found this demographic practises what it preaches. Less cosmopolitan individuals, on the other hand, put people who share their nationality first.

In her keynote speech at the 2016 Conservative Party conference, British PM Theresa May disparaged people who are in favour of open borders – and of a United Kingdom in the EU – by taking up a recurring critique of cosmopolitanism: cosmopolitans are simply too elitist, mobile, and detached from society to care for ‘ordinary’ people in need. While cosmopolitanism entails more open and global orientations, the argument goes, this openness does not translate into support for redistribution either at home or abroad. As Craig Calhoun puts it, “[i]f there is to be a major redistribution of wealth […] it is not likely to be guided by cosmopolitanism”. It is therefore not obvious that cosmopolitanism breeds solidarity in the European Union.

Against the backdrop of the euro crisis, solidarity has become increasingly important for further integration. It is therefore relevant to know whether cosmopolitans – who generally tend to embrace European integration – are also willing to pay a price for it by helping out other member states in need. Recent analyses of opinion surveys indeed suggest that people who have a more cosmopolitan disposition, identify as Europeans, and interact across borders are more supportive of fiscal solidarity in the EU, i.e. they are in favour of helping another EU member state in economic difficulties. However, it is possible that these stated preferences are mere lip service: people who say they support such policies do not necessarily follow up on it by, for example, being willing to pay higher taxes in order to help other member states in need. This raises an important question: Are cosmopolitan individuals willing to practise what they preach and share resources with other Europeans?

To answer this question, we conducted laboratory experiments in four locations in the United Kingdom and Germany. In these experiments, participants earned money and were given the choice whether to keep it and take it home or to share (part of) it with randomly chosen, anonymous participants in either the same location, the same country, or another European member state. Subsequently, participants filled out a short survey that included questions on their concern about humankind, support for immigration, identification as European, and support for European integration. 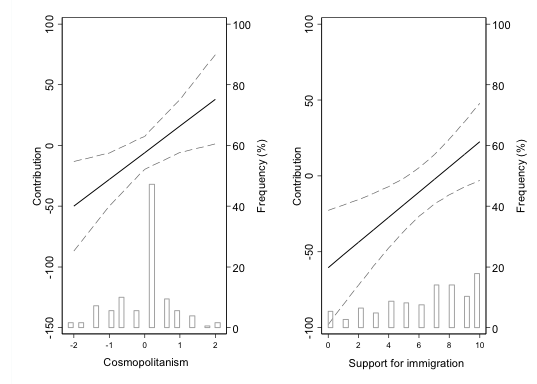 Note: The solid line represents the marginal effect of having a European recipient on the contribution, for different levels of cosmopolitanism/immigration support (with 95% confidence intervals).

Critics of cosmopolitanism could maintain, however, that cosmopolitans, while not discriminating, are overall less generous than people with more national dispositions. In other words, they might be indiscriminately stingy. Contrary to this expectation, we found that participants scoring high on cosmopolitanism contributed more also in absolute terms. These results are robust also when accounting for participants’ socio-economic status, political ideology, and altruism. In our paper, we present analyses of the voter survey of the European Election Study which confirm the general applicability of our findings across the European Union; cosmopolitan attitudes are the most consistent predictor of international solidarity across countries. Taken together, these findings challenge the assertion that cosmopolitans are “citizens of nowhere” who are not ready to share resources. On the contrary, our results imply that cosmopolitans are practicing what they preach, and are at the forefront of international solidarity in the EU.

Theresa Kuhn is Associate Professor in the Political Science Department at University of Amsterdam. She obtained her PhD from the European University Institute, Florence and was a postdoctoral research fellow at Nuffield College, Oxford. Theresa is interested in how Europeans react to globalisation and European integration in their attitudes and collective identities. She is the author of “Experiencing European Integration. Transnational Lives and European Identity” (Oxford University Press 2015).

Hector Solaz is currently a senior research officer at the ESSEXLab and the Department of Government of the University of Essex. Hector received his PhD in economics from the University of Valencia and previously held positions at the University of Birmingham and Oxford. His research interests lie within behavioural science and political economy, mainly using experimental methods to study the economic and political implications and foundations of behavioural phenomena. In particular, he focuses on the determinants of cooperation in collective actions, the emergence and enforcement of social norms, and the role of behavioural biases on voting.

Erika van Elsas is postdoctoral research fellow at the Amsterdam School of Communication Research (ASCoR), University of Amsterdam, and she holds a PhD in Political Science from the same university. Her research interests center around electoral behaviour, Euroscepticism and political trust. Currently, she works in the EUROPINIONS project, analyzing the causes and consequences of change in public opinion about Europe. 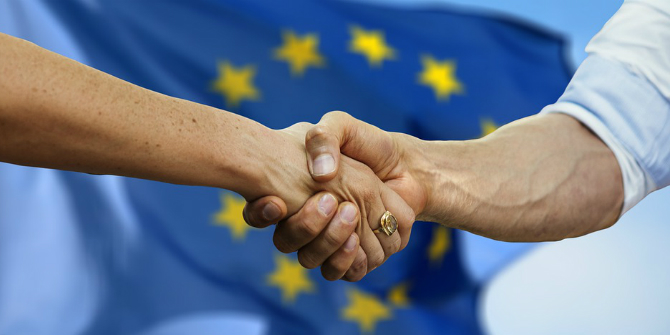 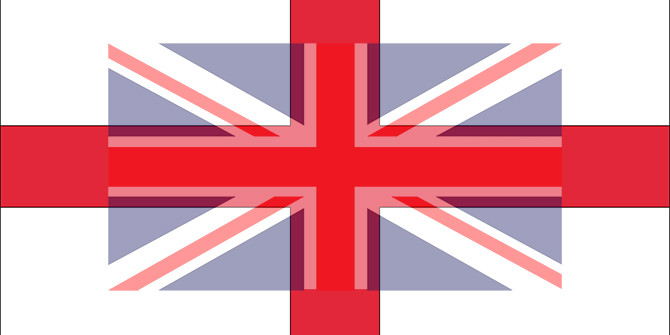