What are the chances of another country following the UK out of the EU? Eurosceptics in other states may be emboldened by the deal the UK manages to secure, especially if it includes access to the Single Market. Moves to further EU integration could have a similar effect. Simon Hix (LSE) and Nick Sitter (Central European University) look at the cases of Hungary and Sweden.

In the midst of the rather shambolic Brexit process, and with the growing recognition of the potentially huge economic costs of leaving the EU single market and customs union, it might seem an inopportune time to ask who will be next to leave the EU.  Opinion polls in no other member state show a majority in favour of following the UK out of the door, and in fact there is some evidence of growing support for the EU in many countries since the UK’s referendum.

Nevertheless, in an opinion poll in nine EU member states in the summer of 2016, 41% of people expected at least one other country to follow.  And, as we shall explain, no matter how painful the process of Brexit is for UK politics or the British economy, Brexit will unleash a new set of institutional dynamics in Europe that could see other countries following the UK.

A key difference between Britain and the next member state to leave is that the next exit is more likely to result from cold calculation of the costs and benefits of EU membership rather than a miscalculation by a prime minister and a country’s political establishment. David Cameron promised a referendum expecting he would not have to deliver one, pursued a deal with the EU he had no realistic chance of securing, and eschewed assessment of the alternatives to EU membership in favour of ‘project fear’.

The next member state to trigger Article 50 may well do so on the basis of a more thorough assessment of the implications of different forms of association with the EU. However painful Brexit may seem for the UK in the short- or medium-term, once the relationship between the UK and EU has been partially settled (it will of course be an ongoing settlement), there will be a new “off the shelf” association for others to consider: a “British model”, in addition to the existing Norwegian, Swiss, Canadian, Turkish, Ukrainian, and so on. This “British model” may start to become attractive to some current member states, who may assume they could avoid some of the costs the UK has gone through in the Brexit process, and jump straight to the final settlement deal for the UK.

Indeed, the Brexit debate is already having an effect on Switzerland and Norway, since the mere suggestion that another model might emerge that secures “access” to the single market at lower cost and/or without the free movement of people has poured fuel on the Eurosceptic fires. In January 2018 the Swiss People’s Party started collecting signatures for a new referendum on free movement, which could unravel the entire set of Swiss-EU treaties. At the same time, The Guardian cited an EU report that Norway had warned that a new “British model” could undermine the European Economic Area (EEA) arrangement. The Norwegian foreign office denied the claim.

Two member states, in particular, are worth considering in this light: Hungary and Sweden. The Hungarian government is more Eurosceptic than its voters, while the Swedish one is more pro-European. The mainstream Swedish parties worked out a pro-EU consensus after the end of the Cold War, whereas Hungary’s two most popular parties are markedly Eurosceptic. Polls consistently show majorities favouring continued EU membership in both countries. Even though “Swexit” (or Svexit, in Swedish) is more popular than “Huxit”, neither enjoys much support. According to a Pew poll in the spring of 2017, 22% of Swedish voters want to leave the Union, compared to 13% of Hungarians.

Having said that, support for the EU is volatile in both countries, and how Brexit plays out and how the EU responds internally to Brexit will influence the direction of travel for the publics and political parties in these two countries. A scenario that would see Sweden as the next country to leave the EU would have to involve a substantial change in the cross-party political consensus on European integration. The most realistic basis for such a scenario would involve the emergence of a model of European integration that is more attractive for Sweden than full EU membership. Three factors could push Sweden in this direction.

First, closer integration among the EU core could push non-Eurozone Sweden to the margins of the EU. A loss of influence might prompt a search for a better alternative. At the time of the UK referendum, there was some speculation in the Swedish press about the desirability of remaining in a Union where the balance between the Eurozone and non-Eurozone states would be dramatically altered. Moreover, the Swedes will lose a close ally on many policy issues, and face higher net contributions and lower shares of EU funding.

Second, a successful soft Brexit could conceivably provide an attractive alternative to full EU membership. As it stands, the only realistic alternative to full EU membership is Norway’s “quasi-membership” model by way of the EEA. This involves net contributions to the EU, compliance with almost all single market legislation, and full freedom of movement, with minimal influence over policy. This binary choice obviously affects opinion polls and party positions. Should Brexit lead to a new model that is more attractive than the EEA, the benefits of EU membership might seem less obvious.

Third, the right-populist Eurosceptic Sweden Democrats are committed to a new referendum on Sweden’s EU membership. Although all the mainstream parties rule out even a “confidence and supply” deal with the Sweden Democrats, the conservative Moderates might need to find a way to secure support from the radical right in the event of a centre-right victory in the September 2018 elections. If this happens, a Royal Commission-type review of Sweden’s EU membership, of the kind Norway produced in 2012, might be a popular option. Reopening of the EU debate could make the altered balance of power in the EU, and the question of alternatives to full membership resulting from Brexit more salient than it is today.

The scenario that would see Hungary leave the EU requires less imagination. After all, Article 50 was written into the Lisbon treaty precisely with a view to the possibility that a member state that had turned authoritarian might want to leave the EU. The Hungarian prime minister prefers “illiberal democracy”. Such a scenario would only need the soft Eurosceptic Fidesz to turn to hard Euroscepticism. Three factors could push in this direction.

First, the right-populist Fidesz government and its Polish Law and Justice (PiS) counterpart have built up a narrative to the effect that the EU has lost its way, and been taken over by cosmopolitan liberals that threaten Christian values. They claim to be leading the way to a new EU, and argue that the mainstream conservative parties in Western Europe will follow where Fidesz and PiS lead. Developments in Bavaria and Austria lend some support to this claim, and so far the European People’s Party has held its protective hand over Fidesz. But if this changes, which it could well do as the effects of the Commission’s invoking Article 7 against Poland play out this spring, prime minister Viktor Orbán’s story about his ability to shape the EU loses credibility.

Second, Hungary faces an EU “resource curse”. Hungary relies almost as much on EU funds as Norway does on its oil revenue: EU support, via agricultural spending and cohesion funds, makes up more than 5% of Hungarian GNI. If Hungary loses EU subsidies, the benefits of EU membership (to the government) would be dramatically reduced. EU financial support provides a raft of opportunities for rent seeking, so a reduction could have a disproportionate effect on the fortunes of the country’s political elite. In June 2017 Sweden floated the idea of linking EU funding to compliance and backsliding. Several other West European states have picked up on this idea, as has Budget Commissioner Günther Oettinger.

Third, the Hungarian economy is closely tied to the German one, and German firms’ investments are crucial. Germany takes more than a third of Hungary’s goods exports to the EU; only Austria and Slovakia are less diversified. The Hungarian government describes the car sectors as “the most powerful single factor within the national economy”. Mercedes-Benz and Audi are prominent examples. But this kind of investment and export is not entirely dependent on Hungary’s EU membership. Even a “hard Brexit”, along the lines of a Canada-style free trade agreement with zero tariffs and zero quotas on goods, could provide a model for trade in goods that protect German carmakers’ presence in Hungary, and thus could allow Hungary to exit the EU without undue damage to one of its main expert industries.

The point of these two scenarios is not to predict the future, but to explore possible trends that could shape things to come. Whether the next member state to leave the EU will do so because its finds a more attractive model elsewhere, or because it is pushed out, remains an open question. But the political agenda for 2018 includes three issues that might well influence the answer to the question “who’s next”: the Article 7 case against Poland, the debates on the next Multiannual Financial Framework, and of course Brexit itself. A soft Brexit that leaves the UK with substantial access to the Single European Market, but does not cross Theresa May’s red lines in terms of budget contributions, free movement and the reach of the EU judiciary, might be the Conservative party’s dream for Britain. For the Swedish conservatives, it could be a nightmare. 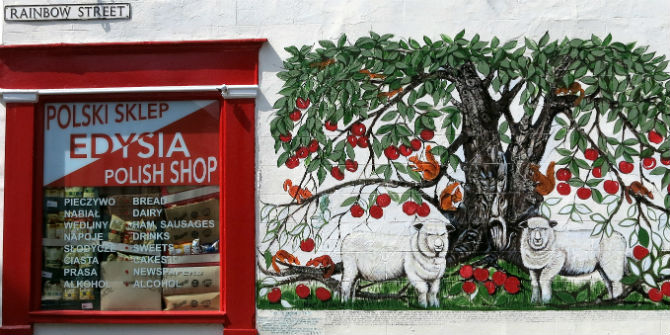 Let local communities decide how much immigration they want