Northern Ireland voted to remain in the EU by a margin of 56% to 44%. John Garry (Queen’s University Belfast) explains that there is a strong division behind this outcome, different ethno-national groups voted very differently in the referendum. Yet, he observes, that with regard to the Brexit process there is a strong consensus on the need to avoid a hard north/south border.

In addition to this potent ethno-national basis to voting in the referendum, a globalisation-based interpretation of voting is also relevant.

Leave voters in Northern Ireland tended to be those ‘left behind’ by globalisation (working class, less skilled and educated voters with socially conservative views) while the ‘winners’ of the globalisation process (young, educated, skilled multi-culturalists) tended to be pro- Remain.

For example, 80% of Northern Ireland citizens with a postgraduate qualification and 71% of those with a degree voted Remain, compared to less than half of those citizens with GCSE qualifications or less. People who attended a grammar school were also more likely to vote Remain than people who did not attend.

These two interpretations of voting – the ethno-national and the ‘left behind’ explanations – interact with each other. Catholics are quite homogenous in their pro-Remain disposition, with little variation between how working class, less well-educated Catholics voted compared to middle class, more highly educated Catholics. 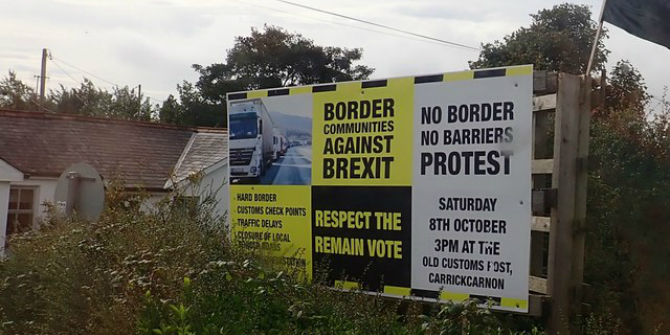 Copyright Eric Jones and licensed for reuse under this Creative Commons Licence.

What about public opinion since the referendum? Comparing the same voters at the time of the referendum and almost one year later, it emerges that 90% of those who voted Remain in 2016 say that they would do so again if there was a second referendum.

However, slightly fewer than three quarters of those who voted Leave indicate that they would do so again if another referendum were held. In a similar vein, ‘switchers’ from Leave to Remain are over twice as numerous (17%), as Remain-to-Leave switchers (7%).

Also, two thirds of all respondents believe that Northern Ireland should have ‘special status’ after exit, meaning that the relationship between Northern Ireland and the EU would be closer than the relationship that Britain would have with the EU. However, differences exist: 85% of Remainers and only 32% of Leavers agree with the need for ‘special status’.

Both sides agree on the need to avoid the emergence of a hard border between Northern Ireland and the Republic of Ireland. Less than a quarter of Leavers and only 11% of Remainers think that there should be a hard border, almost certainly reflecting shared and widespread worries about trade disruption and the potential for renewed political violence – in addition to the likely fear of unionists on the Leave side that the emergence of a hard border could initiate a debate on Irish unification.

While a hard north/south border has little support, half of all respondents (to a September 2017 survey) agreed with the statement that ‘people should be prepared to accept border controls between Northern Ireland and Great Britain, if this is agreed in the Brexit negotiations between the Government and the EU’.

Willingness to accept such controls was stronger among Leave voters (64% agreed), supporters of unionist parties (59%) and Protestants (54%), probably reflecting a willingness to live with east/west border controls as the price of a Brexit successfully negotiated by the British government (although opinions may harden as the issue becomes more politicised).

Lower levels of agreement from Remain voters (44%), nationalist supporters (47%) and Catholics (43%) imply, by contrast, reluctance to contemplate any kind of new border controls. The Northern Ireland component of the Brexit negotiations is likely to remain salient for the entire duration of the process as concerns about the border are inextricably linked to the wider question of the long-term vision of a post-exit UK.

The key take-home message for the negotiators from the evidence on Northern Ireland behaviour and opinion to date is that ‘Brexit’ is associated with a strong division in how the ethno-national groups voted in the referendum, and a strong consensus on the need to avoid a hard north/south border.

This article originally appeared on UK in a Changing Europe and it gives the views of the author, and not the position of LSE Brexit, nor of the London School of Economics.

John Garry is Research Leader at the UK in a Changing Europe and Professor of Political Behaviour at Queen’s University Belfast.

The UK: no longer the EU’s ‘awkward partner’