This week marks the 20th anniversary of the Belfast (Good Friday) Agreement. Katy Hayward (Queens University Belfast) considers the current debate about whether Brexit is a threat to peace and stability in Northern Ireland. She argues that the obsession with avoiding physical infrastructure at the border represents a very limited view of where risks to the peace process might come from.

Hours after people of all political persuasions – unionist and nationalist, conservative and socialist, leavers and remainers – gathered in Belfast to commemorate the 20th anniversary of the Belfast (Good Friday) Agreement, how determinedly counter-current for Daniel Hannan to have this piece published in the Sun. Hannan took the warnings from the Agreement’s architects about the present risks posed to it and interpreted them thus: ‘Remainers don’t really care about Ireland… they just want to stop Brexit’.

The most striking thing about this piece is that a Conservative MEP could bend an ear to the expression of anxieties in Belfast and decide to hear them as “shrill” and disingenuous remoaning. In so doing, he aptly displays the attitude that fuels such fears.

Far from being the preserve of Europhiles, warnings about the stability of peace in Northern Ireland have come from all quarters. Even David Trimble – whom Hannan lauds in this article – has pointed to the risk of provoking violence through Brexit (in this case, from loyalists in reaction to Dublin’s stance).

Even if Hannan is right and all sides are cynically exploiting the ‘fragile peace’, it is worth asking: what is the intended purpose of such warnings? Put most simply, unionists want to warn the Irish government about the consequences of their actions; nationalists want to do the same to the British government.

Warnings of provoking violence or civil disquiet are still a means by which politicians in Northern Ireland force the British and Irish governments to pause for thought. You don’t have to believe in the imminent end of loyalist and republican ceasefires to see that this situation is a sign of severe sickness in the democratic peace in Northern Ireland.

Why should the avoidance of public disorder be what motivates government policy rather than, say, the bolstering of the middle ground, the prosperity of the economy, the erosion of sectarianism or the ending of the ‘brain drain’ through high levels of school leaver and graduate emigration? Because the spectre of armed violence is a tactic that works when it comes to shaping government policy towards Northern Ireland.

The current approach to the Brexit ‘border issue’ exemplifies this all too well. See, for instance, the UK government’s narrow interpretation of a ‘hard Irish border’ to mean one with physical infrastructure. This is a direct outworking of its wish to not have anything on the border that republican paramilitaries can take potshots at. The working assumption appears to be that violent conflict can be averted merely by not having obvious targets for that violence. But, of course, the source of the risk isn’t that republican paramilitaries particularly detest ANPR cameras. Nor would they only object to border checks if they were to occur within spitting distance of ‘the legal border’.

The escalation of violence and securitisation at the Irish border during the Troubles was intrinsically connected to what was happening elsewhere in Northern Ireland – internment, expulsions, atrocities. The principle of the border as a bellwether remains true today. Whether the border is a point of cooperation or conflict is determined by much broader policies and practices, all the way up to those of the two governments. For what allows paramilitary groups to prosper but the failure to create the conditions that prove ‘exclusively democratic and peaceful means’ to be the best way to pursue political goals? 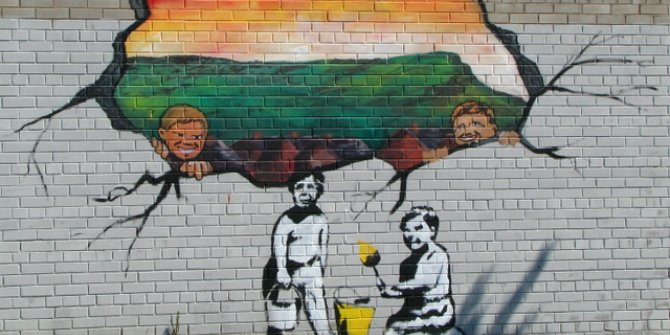 © Copyright Rossographer and licensed for reuse under this Creative Commons Licence.

The Secretary of State assured us on the anniversary of the Agreement that restoring devolution in Northern Ireland was the government’s ‘number one political priority’. Unfortunately, there is, at the moment, far too little publically-available evidence to support this claim. Brexit has dominated the political priorities of the British government since Article 50 was triggered. It has not only driven the government’s agenda, but it has also caused it to contract. Whether the Prime Minister’s habit of dizzyingly-whirlwind visits to Northern Ireland arises from her lack of time, comfort or interest, Brexit is undoubtedly a contributing factor.

This is such a pity because, in this context, Brexit should really not be that important. In Northern Ireland, the landscape of democracy and sovereignty, identity and borders is not primarily defined by EU membership. It is defined by peace. Or by conflict.

The future of this place does not lie in the hands of paramilitaries. Nor can it rest in the hands of one political grouping to the exclusion of others. A future for this place lies in the quality of democracy, trust and cooperation across the three ‘strands’ of the Agreement: unionist/nationalist, north/south, British-Irish.

This is an appropriate time to recall the commitment made in the Agreement to ‘partnership, equality and mutual respect as the basis of relationships’. Partnership, equality and mutual respect are not merely civilising principles for a post-conflict region; they are qualities for MLAs, MPs and MEPs of all parties to uphold and to demonstrate in relationships across these islands. If they really care about Northern Ireland, that is.

Katy Hayward is a Senior Lecturer in Sociology at Queen’s University Belfast.