Apart from a no-deal Brexit, what does the Brexit Party want? Callum Tindall (University of Nottingham) analyses its monthly newsletter to find clues about the party’s policies and ideology.

At next month’s general election, the Brexit Party (BP) embarks upon its first venture into national politics. Less than a year old, with successful European parliamentary elections under their belt, they have yet to present a public manifesto. This raises key questions. Who are they? Who do they represent? What is the party’s core ideology? What are their policy goals?

We can find some answers to these questions in the Brexit Party’s monthly newsletter, ‘The Brexiteer’. This platform has allowed the party to construct a fresh image to entice voters both on and offline, articulating culturally broad appeals and providing a humorous and engaging mediated public dialogue. Its key contributors are leader Nigel Farage (pictured on the front and back of each issue), Chairman Richard Tice, MEP Ann Widdecombe and Wetherspoons owner Tim Martin.

Primarily offering opinion pieces and popular culture references, it takes a tongue-in-cheek, simplified approach to politics. The Brexiteer tries to show that the Brexit Party is an eclectic ensemble of actors from across the political spectrum. It speaks to the “Brexit heartlands”, reaching out to the “politically homeless” through a populist discourse. Its coalition of Brexiteers unite around democracy and civic nationalism. While primarily a single-issue party, its policy proposals touch on a variety of left and right-wing issues, diversifying its political appeal. With trust in politicians at an all-time low, the opportunity for outsider party success is ripe – and although they are extremely unlikely to win a majority, the Brexit Party could have a substantial impact on British politics.

The party is a broad church coalition of Eurosceptics from across the political spectrum. Their diverse mix of MEPs includes a former Communist, CEOs, an environmentalist and former politicians. The party plans to contest over 600 seats in the General Election. It attempts to sidestep past criticism of UKIP as ‘fruitcakes, loonies and closet racists‘ by recruiting a Danish and a Malaysian MEP. The Brexiteer claims they are “the EU’s most diverse party” and “part of a global community”. Unlike far-right continental Eurosceptics such as Alternative for Germany and the Rassemblement National, there appears to be no exclusion on grounds of race, religion, gender or sexuality. As a new party, BP has had free rein to create its own image, although its leader Nigel Farage is a key focal point, and in this respect it bears a resemblance to Emmanuel Macron’s En Marche movement. However, Farage’s decision not to stand as an MP may dissuade potential supporters.

The message is principally aimed at people in the “Brexit heartlands of the North, the Midlands and Wales”, including a focus on “coastal communities”. A clear frontier is drawn between these and London, which is routinely vilified as home to a “metropolitan clique” and a “hyper-liberal cultural elite”. Speaking for the “politically homeless”, it crosses boundaries, hoping to bridge political divide and appeal to the politically ostracised and apathetic. Its narrative feeds into working-class cultural tropes, such as the central role of pubs in its discourse, along with its use of memes and analogies. There is even a mention of Brexit as a revolt by the “chavs, townies and Tommies”.

While the BP does not explicitly embrace any fundamental ideology, there are three key elements in its discourse. These are populism, civic nationalism and a pro-democracy motif, which overlap in a framing of the British state as the basis of popular sovereignty. The party’s political position is best described as “big tent”, similar to Italy’s Five Star Movement’s catch-all approach. With party discipline, members are united around Brexit and the signifier “democracy”. It builds support with the idea that “the enemy of my enemy is my friend”. The Brexit Party’s nationalism is predominantly civic. Unlike UKIP, its rhetoric has only a limited focus on immigration, allowing for a broader popular appeal.

The BP’s populist approach demands a rhetorical divide between the pure people and corrupt elite. This relationship is predominantly antagonistic, and plays out as “the sovereign people” against the “Remainer elite”, framed as a “political battle” and “war”. Their rivals are considered to be “surrendering” to the EU and “betraying” the British public. Their cultural and political elite are cast as “democracy deniers”, “trapped” in a Westminster bubble out of touch with “common people”. Simple political binaries spread its core message: “Clean-break Brexit, or surrender?” and “Democracy or betrayal?”.

Clearly, the Brexit Party’s core goal is to deliver a “clean-break Brexit” (a positively framed no deal), which they consider “the best deal for Britain”, a message reiterated in their election campaign launch. However, it wants to be more than a single-issue party. The Brexit Party’s “new way of doing politics” brings together a plethora of policy proposals from both the left and right-wing. Their proposals include vast political reform to “promote democracy” and remedy “broken Westminster”. This involves changing the electoral system to be more proportional, abolishing the Lords and stopping the ‘abuse’ of postal votes.

The Brexiteer claims that leaving will provide a “Brexit dividend”, which would enable a “Brexit Booster Plan” of £200bn of economic stimulation, providing “tens of thousands of good jobs” through an “infrastructure boom”. It includes elements of both state spending (often excluding London) and cutbacks. Policy proposals range from abolishing inheritance tax to investing in the environment and recycling.

The Brexiteer indicates that the party wants to address the needs of the “Brexit heartlands” of the North, Midlands and Wales – specifically reaching out to the politically disillusioned and working class. Its ideology is broad, but focuses on populism, civic nationalism and democracy to unify its support. Its policies extend beyond Brexit and cross political frontiers, feeding into both left and right-wing narratives along with its proposed political reforms. With the public mood sceptical of traditional politics, there is potential for a breakthrough. Whether the party can survive beyond Brexit – no deal or otherwise – is less clear. 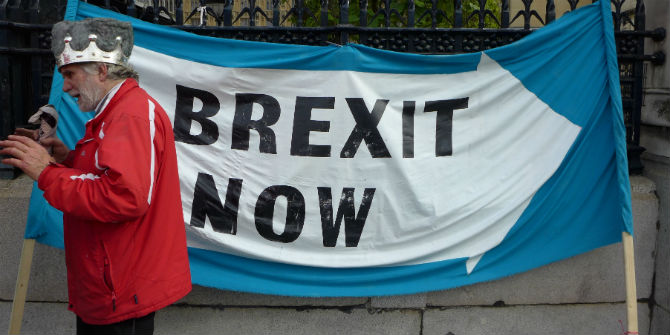