The treatment of the ‘Windrush Generation’ has been appalling. Yet, argues Matthew Grant (University of Essex), it reflects the government’s policy of creating a ‘hostile environment’ for people who lack documentation in the UK. And while the plight of Windrush immigrants has generated sympathy even from people who normally oppose immigration, there is little chance that migrants from the rest of the EU will be treated any better. Indeed, most of them will lack the ‘cultural capital’ that has driven outrage about the handling of immigrants who arrived in the 1950s and 1960s.

The explosive row about the deportation and citizenship status of the ‘Windrush Generation’ has highlighted the complexities of citizenship discourse in the UK today – and the human costs of the government’s policy of creating a ‘hostile environment’ for those people it considers to be living in Britain illegally. The political and administrative failures the episode has revealed have understandably caused concern about the government’s ability to implement the changes to status that will come with Brexit. These changes to people’s rights will affect significantly more people that those tragically caught up in the current debacle – which seems to bode ill for the careful and humane handling of individual cases that should be an essential part of the Brexit process.

But the significance of this episode for Brexit and future of citizens of EU-27 states in the UK is far wider and deeper than administrative incompetence. It reveals cultural assumptions about immigration and rights that have potentially damaging consequences for EU citizens in the UK.

The Windrush crisis has occurred due to two separate legal processes. The first was the attempt by successive governments in the 1960s and 1970s to limit immigration to the United Kingdom by non-white members of British colonies. In 1962, the Commonwealth Immigration Act removed the rights of British passport holders born in British imperial possessions to live and work in the UK, rights that had been previously codified and guaranteed by an Act of 1948. In 1968 and 1971 successive Acts further restricted the rights of Commonwealth citizens without family who had been born in the UK. It is these Acts, clearly aimed at preventing black and Asian immigration that have created the current situation where men and women who have lived in the UK for more than fifty years can be deemed to be in the UK illegally.

But it is a much more recent step which has caused this crisis: the government’s hard-line policy of creating a ‘hostile environment’ for illegal immigrants enshrined in the 2014 Immigration Act. This policy has been designed to make it near-impossible for people without documentation to live in the UK: to secure medical care, housing, or a driving licence. The burden of ‘proof’ required to access services that are usually accessible by right has increased dramatically. For a generation of people who entered the UK in the 1960s and 1970s, this documentation has been hard, or impossible, to provide. Revelations concerning the destruction of key documentation has only sharpened concerns that the state is unfairly using the hostile environment policy to punish people born outside the UK. As such, the ‘Windrush Generation’ has been caught between two policies: one that allowed their entry in contrasted circumstances and one which punishes them for the nature of that entry.

The outcry over the plight of these people has been heard across the UK political spectrum, including from the anti-immigration Daily Mail, which has been forthright in its condemnation of the crisis. Some of this outcry, however, relies not on the legal definition of citizenship of these people’s rights, but on cultural ideas of belonging which have long shaped notions of citizenship in the UK.[1] For Mail columnist Sarah Vine

“nationality is so much more than a piece of paper with a number on it. It’s about contributing, belonging, being a useful member of society. Many of these people have done more than their fair share of that”.

In this, they apparently stand in stark contradiction to the ‘sly’ illegal immigrants ‘who flush their passports down the toilet and lie about their age in order to claim asylum, or take advantage of our generous welfare system to line their own pockets’.

For Vine, and for many people who have who have written about citizenship in the past fifty years on left and right, belonging is associated with values of hard work, apparent social integration, and myriad aspects of culture. The Windrush episode has caused such condemnation precisely because, in the eyes of the right as well as the left, its victims are  ‘British’ in all aspects of life and behaviour. This represents a significant historical shift in how immigration from the Caribbean has been viewed. The 1962 Commonwealth Immigration Act was passed precisely because men and women were seen to ‘not belong’ in Britain at a time when Britishness as largely synonymous with Whiteness. As the  row about the BBC’s decision to broadcast a reading of Enoch Powell’s 1968 Rivers of Blood speech reminds us, the Windrush Generation’s place in the UK has often been attacked.

How we can explain this transition, and what does it mean for Brexit? There can be no doubt that discourse about citizenship and belonging has notably shifted over the past decade or so. In many ways, it has become less explicitly ‘racial’, at least in the obvious and binary way it was traditionally understood. Instead, debate has increasingly focused on ‘culture’ as a synonym of race. As Stuart Hall argued many years ago, these are simply different registers of racism.[2] But whereas black men and women of the ‘Windrush Generation’ are defended as personifying British values, the ‘illegal immigrants’ are attacked, as are British Muslims for their ‘failure’ to ‘integrate’ into a sense of Britishness ascribed by others.

This is the key lesson ahead of the Brexit transition. The toxic discussion over Brexit has highlighted that British political culture has a deep problem with freedom of movement, with both Conservatives and Labour fighting the General Election of 2017 on a platform of limiting the rights of European citizens to live and work in the UK. The rise of anti-immigration feeling in political and popular culture can be understood as part of a sharpening of the divide between those seen as belonging and those seen as not belonging. The vicious attacks on immigration from countries of the former communist bloc that accompanied EU expansion in 2004 created the impression of Bulgarian or Romanian criminals swindling British benefits. Unfortunately, this evil stereotype appeared to gain huge purchase in the referendum discussions, and is one of the most powerful symbols of the EU-27 presence in the UK today.

Any positive resolution to the ‘Windrush Generation’ crisis will be as much a result of the outcry that such obviously ‘British’ people have been so ill-treated as of the purely legal rights and wrongs of the case. The ill-treatment that EU citizens have already been subjected to has not been treated in the same way by the media and the public, and neither will the ill-treatment that appears almost certain to come. EU citizens will not have arguments about ‘Britishness’ on their side. Some may have high-profile, or socially ‘useful’ jobs, and friends and colleagues able to publicise their plight, and be able to make utilitarian arguments about their contribution to British life. Others will not, and in the current climate, I fear these voiceless people will be all too easily pushed around by an incompetent, antagonistic state.

Matthew Grant is Reader in History at the University of Essex. 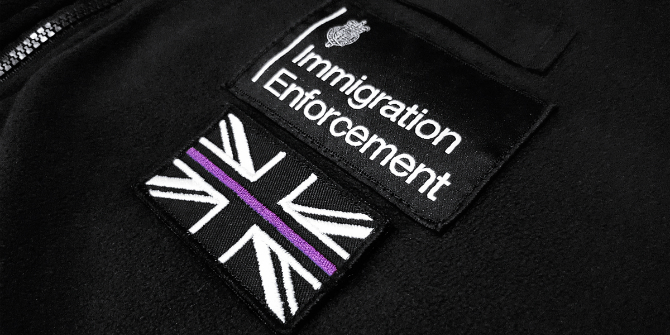