Are firms moving investment abroad because of Brexit? Holger Breinlich, Elsa Leromain, Dennis Novy and Thomas Sampson (LSE) use a ‘doppelganger method’ to estimate how foreign direct investment would have evolved without the vote for Brexit. They find a 12% increase in the number of new investments made by UK firms in EU countries, and an 11% fall in new investments made by EU firms in the UK. Moreover, there is no sign of a ‘Global Britain’ effect that would have seen UK firms investing elsewhere in the world.

The UK’s vote to leave the EU has generated fears that UK firms are moving investment abroad because of Brexit. For example, media reports have documented that both large UK companies such as Barclays, HSBC and EasyJet, and smaller companies such as Crust & Crumb, a Northern Irish pizza maker, have invested in the EU27 in response to Brexit.

Has the threat of reduced access to the EU market after Brexit pushed British firms into setting up shop in the remaining EU member states, rather than serving those markets from the UK?

In new research (Breinlich et al. 2019), we study whether the anecdotal evidence is representative of a wider pattern. We measure new FDI activity through a count of announced greenfield and M&A (mergers and acquisitions) transactions. Greenfield activity refers to investments that create new establishments or production facilities from scratch, for example setting up a new factory. M&A transactions refer to the acquisition of existing facilities. Our analysis focuses on the period from 2010 to 2018, during which we observe around 100,000 transactions in total.

We employ the ‘doppelganger method’ to analyse the impact of the Brexit vote. This is a way to estimate how UK FDI to the EU27 would have evolved after the June 2016 referendum if the UK had not voted for Brexit.

We construct a doppelganger for UK FDI as a weighted average of FDI transactions between other developed countries, with FDI into the EU27 from Switzerland and the United States receiving the biggest weights. If the referendum outcome had no discernible impact on UK FDI, then the doppelganger and the actual series should be similar not only before, but also after the referendum.

The referendum increased foreign investment from the UK to the EU27

Figure 1 shows our results. The number of FDI transactions from the UK into the EU27 goes up substantially after 2016 Q2 compared to the synthetic doppelganger, which remains at 2014 and 2015 levels. 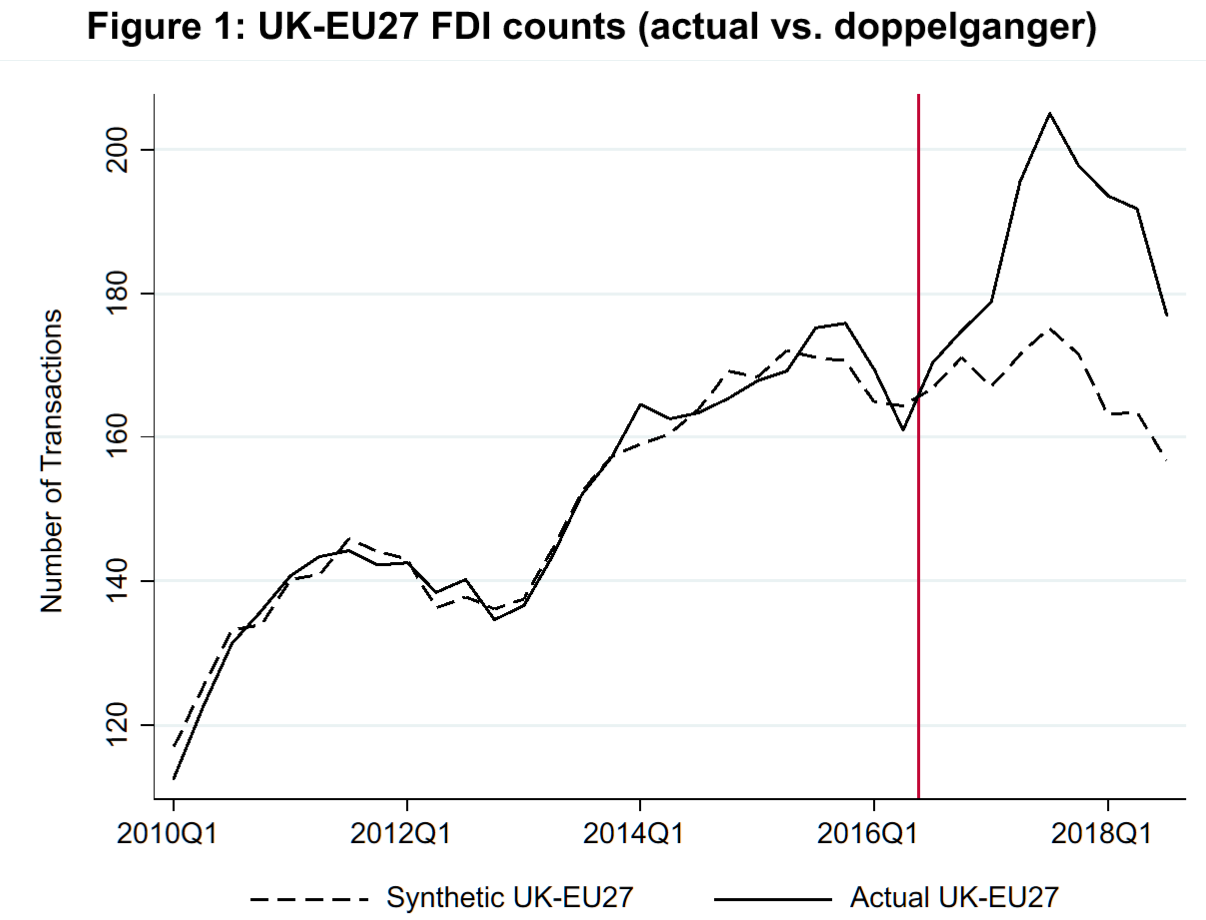 In terms of the cumulative difference, we find that 181 greenfield and M&A transactions from the UK into the EU27 had taken place by 2018 Q3 that would not have occurred in the absence of Brexit. This represents a 12% increase in new FDI projects by UK firms in the EU27.

In further analysis we find that the increase in outward FDI from the UK to the EU27 is entirely driven by the services sector. This result is consistent with the view that the UK government has prioritised the interests of manufacturing over services in the Brexit negotiations by focusing on reducing customs frictions, while ruling out membership of the EU’s single market.

In terms of value, we estimate that these additional FDI outflows from the UK to the EU27 are worth approximately £8.3 billion in total by 2018 Q3. Moreover, the persistence of the gap in Figure 1 shows that the referendum effect has not yet died away, meaning the increase in outward FDI due to Brexit is likely to grow further as more data becomes available.

As a note of caution, we stress that the FDI outflow can only be interpreted as ‘lost investment’ for the UK under the assumption that the investment transactions would have taken place in the UK, instead of the EU27, were it not for the leave vote. It could also be that the referendum outcome simply triggered additional investment by UK firms in the EU27. We therefore regard £8.3 billion as an upper bound on lost investment.

Is the increase in FDI from the UK specific to the EU27 as a destination, or do we observe similar changes in UK investment flows to other countries? To evaluate this possibility, we construct a doppelganger for UK investment into non-EU OECD countries.

In contrast to the EU27 as a destination, we do not observe an increase in UK investment activity into these non-EU OECD countries. That is, UK investment in advanced economies outside the EU27 has not experienced a post-referendum surge. In other words, we find no sign of a ‘Global Britain’ effect.

Finally, we show that increased outward investment in the EU27 has been accompanied by lower investment coming into the UK from the EU27. We estimate that the referendum reduced the number of new EU27 investments in the UK by 11%, amounting to £3.5 billion of lost investment.

We show that the Brexit vote has led to a 12% increase in the number of new investments made by UK firms in EU27 countries. We find no such increase in UK investment in countries outside of the EU.

Although it is not possible to be certain about the reasons behind firms’ investment decisions, our results are consistent with the idea that UK firms are offshoring production to the EU27 because they expect Brexit to increase barriers to trade and migration, making the UK a less attractive place to do business. In the event of a no-deal Brexit, more firms are likely to activate contingency plans for moving production abroad, accelerating the outflow of investment from the UK.

This post represents the views of the authors and not those of the Brexit blog, nor the LSE. The full report is available here.

Dennis Novy is an associate in trade at the Centre for Economic Performance, LSE and an Associate Professor of Economics at the University of Warwick.

Thomas Sampson is an Associate Professor of Economics at the LSE and a CEP Trade Research Programme Associate. 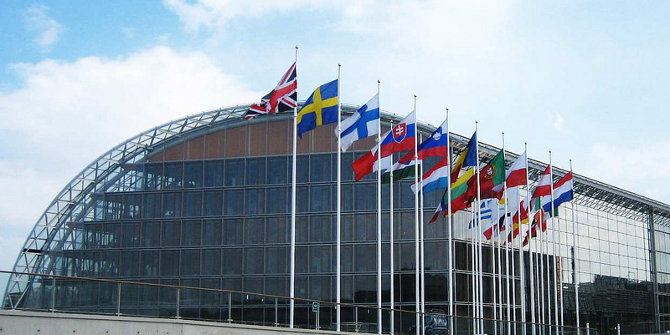