The three years since the referendum have given the financial sector plenty of time to prepare for Brexit, writes Rebecca Christie (Bruegel). Thousands of lawyers have registered to practise in Ireland and firms are using Brexit as a chance to diversify, relocating some services elsewhere in the EU.

The UK is leaving the European Union, in spirit if not in immediate legal jurisdiction. While the next phase of Brexit won’t emerge until October, the financial sector is already on the move. London, long the dominant hub for bankers and investors, will cede ground to a quartet of cities within the EU core. In turn, London’s lawyers are moving to Dublin, raising questions about how they can work cross-border going forward.

Paris, Frankfurt, Amsterdam and Dublin are the locales with the most to gain overall from the transition, with Luxembourg, Brussels and Warsaw all picking up business as well. Rather than a unified mass transition out of London to another singular hub, the financial industry is using Brexit as an opportunity to diversify. Just as banks have learned to keep their headquarters and back-up facilities in separate physical locations, now they are splitting up their operations in terms of function and human capital.

A lot of the discussion has focused on risk and loss. What is London giving up? What infrastructure shortcomings will emerge? What will it cost and who will shoulder the burden? The modern world has grown accustomed to seamless trading, so any threat to the financial plumbing is a serious concern.

At the same time, Brexit has sparked a transition with some positives. Each of the European cities that gains a share of London’s departing business will see a boost from the jobs and households that will relocate – not just in the short run but in the years to come, as financial firms choose not just where to move but where to set up future operations. For every big insurance company or American bank that moves its EU headquarters to Dublin, for example, a cluster of smaller supporting businesses is likely to emerge. For every executive household a bank needs to move to Paris, a corresponding drop in living expenses is likely to offset the cost of the move.

For the European Union as a whole, this transition can be promoted as offering something for everyone, with benefits spread widely among the 27 countries who remain in the bloc. There are also benefits for London, especially in the eyes of the Brexit-backing public. For those voters, a smaller City is an attraction, not a drawback. If London’s real-estate market cools off, and if global investors lose a little of their thirst for a UK pied-à-terre, it opens up housing for locals. Likewise, if London loses some of its swagger, Britain’s less urban populations may regain some of their voice.

Where the UK specifically is concerned, financial-adjacent business may bear the brunt of issues yet to be resolved. For example, lawyers will not only need to negotiate the Brexit transition, they will need to manage it for their own profession.

Ireland, one of the few EU jurisdictions that is both English-speaking and under a common-law rather than civil-law framework, has been the epicentre of changes to the legal profession. British lawyers have signed up to the Irish bar since the prospect of Brexit emerged, as big law firms register their staff en masse. As of the end of May 2019, a total of 2,970 England and Wales solicitors had been admitted to the Irish Roll of Solicitors since January 1st 2016, with about 600 more applications at various stages of being processed. These lawyers in transition now make up nearly 15% of the total. 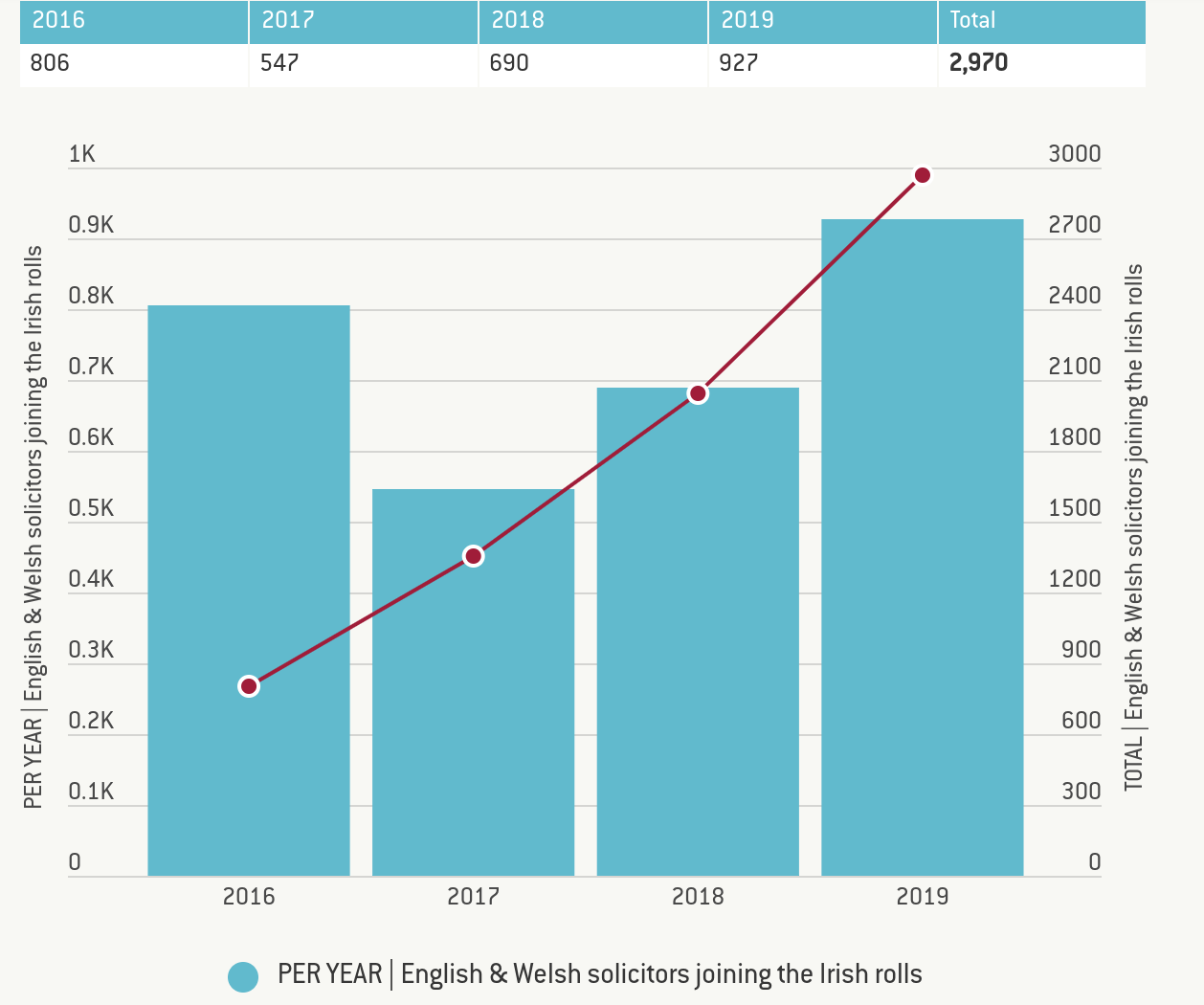 This has further raised the question of what Ireland will consider valid residency for those who practice law in its system. For now, the answer to this complex question depends on how the EU’s relationship with post-Brexit Britain takes shape. Under some scenarios, this could greatly complicate working relationships, especially for London-based clients. Will they continue to be able to use a London-based lawyer to manage their EU affairs, or will they need to switch to partners in Brussels or Dublin to make sure everything can work smoothly? In the past, Europe has been willing to travel to London, but now Londoners may need to make the journey in reverse.

The EU will face tough choices over when and if to offer mutual recognition to regulators in non-member countries. It will be difficult to create Brexit-proof legal contracts when the shape of the new legal order has yet to emerge. “The post-Brexit recognition and enforcement of English judgments across the EU remains unclear. Unless and until these issues are resolved, there is likely to be additional complexity, uncertainty and risk for businesses and individuals as a result of Brexit,” the Irish Law Society wrote.

Britain seems confident it won’t be a huge shift, and so far the financial-sector numbers back that up: banking assets leaving London amount to only about 10% of the total so far, according to think-tank New Financial. It’s possible this amounts to the tip of the iceberg, but it is equally possible that financial business flows gradually away from London in a way that shrinks but doesn’t decimate the metropolis’ role as a financial hub. Inertia is a common European response to managing thorny problems.

In the three years since the UK’s 2016 referendum on EU membership, the markets have had plenty of time to prepare. Banks and other financial firms are establishing or activating licenses within the EU, designing systems that will work under a variety of outcomes and taking a flexible approach to their workforces. Official-sector actors might have a tougher road – EU institutions may be barred from doing business with financial firms that aren’t subject to EU legal proceedings, for example. But while the financial industry would prefer an orderly and well-planned transition, in the event of a hard Brexit most private market participants will still be fine.

For most of the industry, contingency planning and transition periods are already in place: licences have been set up and activated, legal frameworks are already under revision. The European Commission said on June 12 2019 that the financial sector has made “significant progress” in getting ready, pointing out a few areas to work on in the run-up to the next deadline. “Insurance firms, payment services providers and other financial service operators which remain unprepared regarding certain aspects of their business (for example contract management and access to infrastructures) are strongly encouraged to finalise their preparatory measures by 31 October 2019”.

Generally speaking, workarounds are possible and transition periods are part of every scenario. “After a thorough examination of the risks linked to a ‘no-deal’ scenario in the financial sector, the Commission has identified only a limited number of contingency measures to safeguard financial stability in the EU27,” the EU’s executive branch said in December. For critical pieces of financial infrastructure, the EU has already made clear that adjustment periods are part of its contingency planning. For example, the plans published at the end of last year included a 12-month extension for derivatives clearing and contract novation, and a 24-month guaranteed equivalence status for UK central depositaries used by EU firms; the latest guidance suggests those can be adjusted as needed depending on the date of exit.

It’s conceivable that after Brexit, the UK might remain within the single market or a customs union with the EU for an extended transition, or indefinitely. This would be a triumph for negotiators on both sides if it could be agreed, especially given the setbacks faced by the originally negotiated and so-far unadopted Withdrawal Agreement. Generally speaking, whatever new framework emerges is likely to have more roadblocks than the status quo and may wobble whenever Britain’s domestic politics flare up.

Also in question is what happens if Britain never leaves at all. While the UK has shown no sign of wanting to reverse course, it also is currently without a prime minister or a workable strategy. As last month’s European Parliament elections show, anyone planning a post-Brexit Europe also needs to plan around including a UK that hasn’t actually left. At its most extreme, this might even mean that a future British government revokes Article 50, hitting reset on the status quo and raising a slew of questions about what measures would remain available to a member state with one foot, but only one foot, perpetually half out the door. So far, outright discussion of these possibilities remains confined to backchannels and coffee chatter. But as October nears it has begun to leak into the public sphere, as British officials repeatedly rule out ‘no deal’ without any sign of getting closer to an agreement.

Regardless of where Brexit stands, the EU will need to integrate its capital markets more fully in order to support economic growth and guard against the next financial crisis. Anti-money laundering is a thorny EU conundrum, if not especially Brexit-linked. More generally, cross-border banking brings challenges for regulators in the ‘home’ countries of firms’ financial headquarters as well as the ‘host’ countries where they do much of their business. Should regulators require firms to tether some of their assets to specific locations, or is the system safer when capital can flow freely across borders? How can financial firms merge when every country has its own insolvency proceedings and other local infrastructure? And how will the new system decide which judges and lawyers have the authority to settle these disagreements?

Whether or not London stays in the single market, the EU will have to come to grips with whether to concentrate on a centralised, homogenous regulatory framework or allow regional differences to prosper in support of a diverse and competitive financial sector. Big countries and small countries may find they have different interests in the amount of local flexibility that should be allowed, and Europe will have to build a workable system that takes these competing interests into account. Brexit will be a catalyst for all sides to push for change on their priorities.

This post represents the views of the author and not those of the Brexit blog, nor LSE. It first appeared at Bruegel.

Rebecca Christie is a Visiting Fellow at Bruegel. She was previously a political correspondent in Brussels for Bloomberg News. 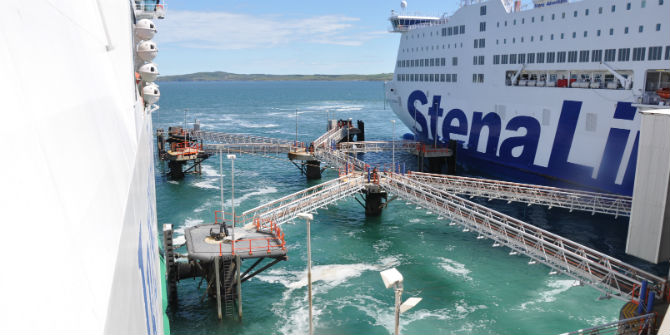 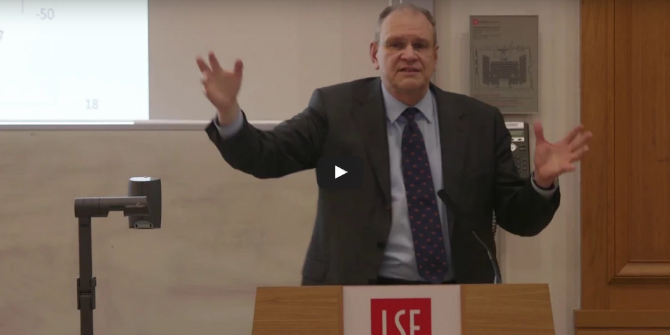